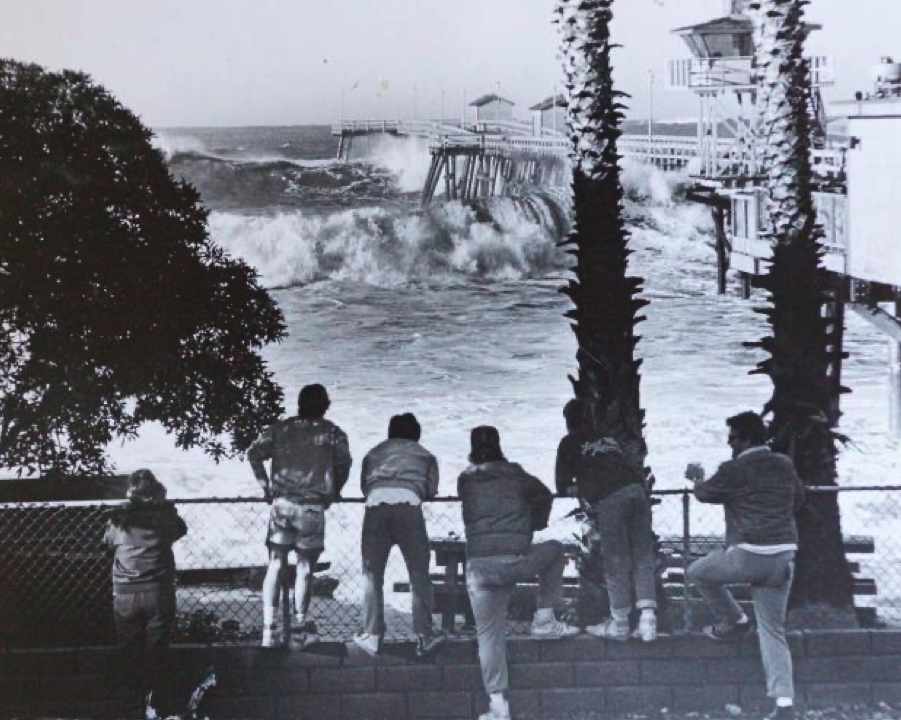 Sand. It’s one of the key components when it comes to good surf. And for anybody who’s spent time in the waters between Dana Point and San Onofre over the years, you’ve probably become acutely aware that there’s less sand on our beaches today than ever.

It’s something I hear surfers talking about every time I’m in the lineup around here.

“There were waves breaking, and throwing big boulders on the train tracks,” reported one surfer at Cotton’s last week.

With every passing swell, the erosion gets worse, and whether it’s threatening the train tracks down at Cotton’s Point or the homes along Beach Road in Capo Beach, we’re losing our beaches at a frightening pace.

Spending time down at Lower Trestles for the Rip Curl WSL Finals, it was very apparent how critical things have gotten. When the Championship Tour first started coming to Lowers in the early 2000s, there was enough beach to set up all the contest infrastructure on the sand and still have room for an access road and plenty of space for fans to spread out.

Not so much this year. The event site had to be largely reconfigured to fit in the limited space without intruding on the wetlands. And as far as fan viewing, the throngs of surf-stoked folks stretched from Middles to Uppers with little open space to spare.

Or what about the seawall in front of the San Onofre Nuclear Generating Station that is bombarded by waves every time there’s some swell and a high tide? There are environmentalists and activists who have been documenting this due to their concern for public safety.

And while there are ongoing conversations happening and plans being made by various agencies, at the moment, it would appear things are going to get worse before they get better.

“Shoreline erosion is expected to accelerate with sea level rise and will likely be the most significant hazard impacting coastal resources in San Clemente due to ‘coastal squeeze,’ ” reads the city of San Clemente’s Sea Level Rise Vulnerability Assessment, issued in October 2019.

“While the City has a long history of addressing coastal hazards, this is the first focused endeavor by the City to identify possible responses to climate change impacts at the coast, including adaptation strategies based on preparedness, avoidance, and/or protection from the risks projected to occur over time,” continues the report.

So, where’s all the sand going, and what do we do now? I’d love to tell you I knew, but rather than getting that civil engineering degree I first pursued with the hopes of addressing issues like this, I switched to an English major after realizing I was no good at calculous and chemistry.

As a lifelong surfer, though, there are a few things that seem obvious.

For starters, sand is a migratory substance that shifts up and down the coast depending on currents, swells and storms, and manmade structures like the breakwaters in Dana Point, Newport Beach and Long Beach interrupt that natural sand flow.

Decades after they were built, we’re still learning about the impacts they have on the marine environment.

Another component is that the creeks and arroyos in the area don’t flow out to the sea like they used to and replenish the sand on the beaches. The San Juan Creek and San Mateo Creek, among other smaller waterways, were critical to our beaches, but now, thanks to drought and being siphoned on further upstream, they only reach the ocean after extended periods of heavy winter rains.

As surfers, the loss of sand and shrinking of our beaches directly impact what we do. And as surfers, we owe it to our playgrounds to help be part of the solution.

It’s nothing that’s going to be fixed overnight. It’s going to take a large-scale, holistic approach from local, state and federal agencies. But we can start by acknowledging the situation and talking openly about it.