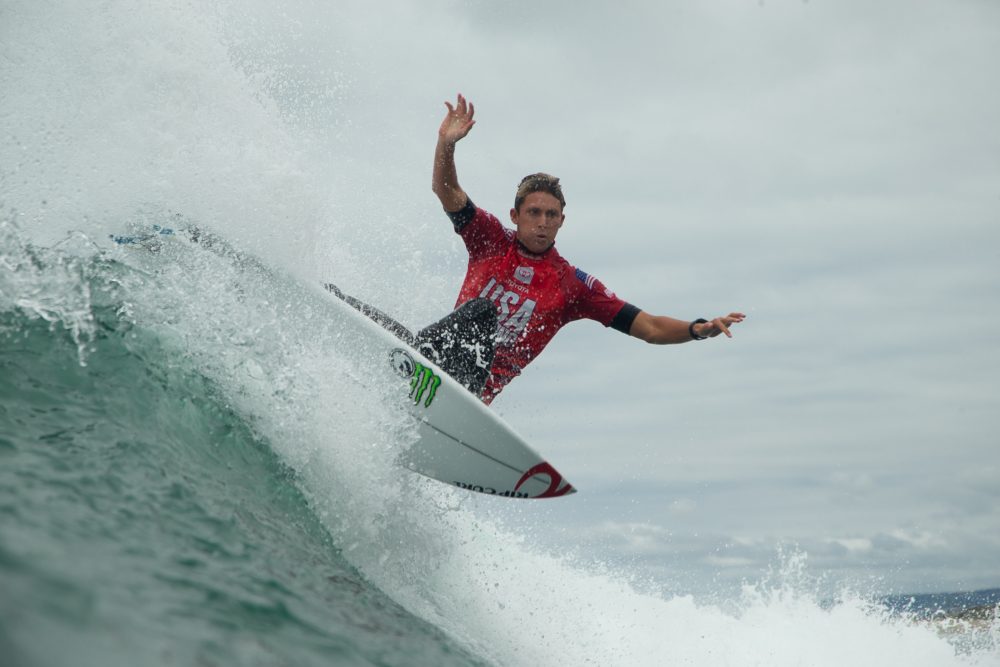 Welcome to the Epicenter of American Surfing

“San Clemente’s the hotbed, no question,” said USA Surfing Coach Brett Simpson immediately after he was appointed to the position.

The results of last week’s USA Surfing Championships at Lower Trestles have proven him correct. Nowhere in the country is there a deeper pool of rising talent than in San Clemente. And all of these up-and-coming surfers have one thing in common: Olympic aspirations. With surfing becoming an Olympic sport for the first time in the 2020 Summer Games in Japan, the sport is on the cusp of a new era, and San Clemente’s young surfers are at the epicenter of it all.

Crosby Colapinto, brother to WSL Championship Tour surfer Griffin Colapinto, firmly planted the flag in the ground with a near-perfect performance in the Under-18 Boys division. Colapinto’s been building both his momentum and his profile this year, and saving the best for last, he exploded in the final to win the highly coveted Governor’s Cup.

In classic three- to four-foot Lowers conditions, Colapinto ripped his way to a perfect 10 out of 10 thanks to a string of searing forehand carves and maneuvers. Not done there, with the top two waves going into his final tally, Colapinto launched a huge, tail-high air reverse. Garnering a 9.93 from the judges, he closed the heat with a near-perfect 19.93 heat total. The effort earned him his fourth USA Surfing national title.

And while it was Carlsbad’s Alyssa Spencer who took wins in both the Under-16 and Under-18 Girls divisions, right there on her heels in both finals was San Clemente’s Sawyer Lindblad, who had to settle for a pair of runner-up finishes. Kirra Pinkerton finished third in the Under-18 Girls.

Making it a family affair for the Lindblads, brother Taj managed a very respectable fourth in the Under-16 Boys. And in the Under-14 Boys, Hayden Rodgers found the top of the podium. In fact, the Under-14 Girls division was the only one not to feature a surfer from San Clemente in the final.

“The groms were surfing far beyond their years,” Coach Simpson said in awe after the contest.

Not just a contest for bragging rights and trophies, there also were career implications for surfers at the USA Surfing Championships, as it’s one of the deciding factors in selecting both America’s Junior National Team and Junior Development Team.

“Selection to national USA Surfing teams brings athletes into an elite program with year-round high-performance training and skill development to not only build elite professional athletes, but future Olympians,” Becky Fleischauer from USA Surfing said in a statement.

The end game for the season is to name the 12-person team that will represent the U.S. at the 2019 ISA World Junior Championship in Huntington Beach this October.

After the USA Surfing Championships, 32 boys and girls have been selected for the Junior National team. This number will be cut down to 16 in July, before being whittled down to the final 12 before the ISA event.

As far as USA Surfing’s Development Team, nine out of the 20 surfers selected are from San Clemente.

“The development team is designed to be a proving ground for the youngest surfers to train and improve and eventually move up to the junior national team level, which is a significant jump in performance levels,” Fleischauer said. “Selection is based on regional and national results, the athlete’s commitment to improvement and the coaches’ eye for budding talent.”

At the moment, local boy Kolohe Andino is second in the world on the WSL’s Championship Tour, Crosby Colapinto just won a national title in historic fashion, and nearly 50 percent of the Under 15 national development team is from the area. That not only speaks to the elite state of surfing around town right now, but its future as well. Nowhere else in the country even comes close to any of that. Like Simpson said, this is the hotbed of American surfing. We should all be proud.