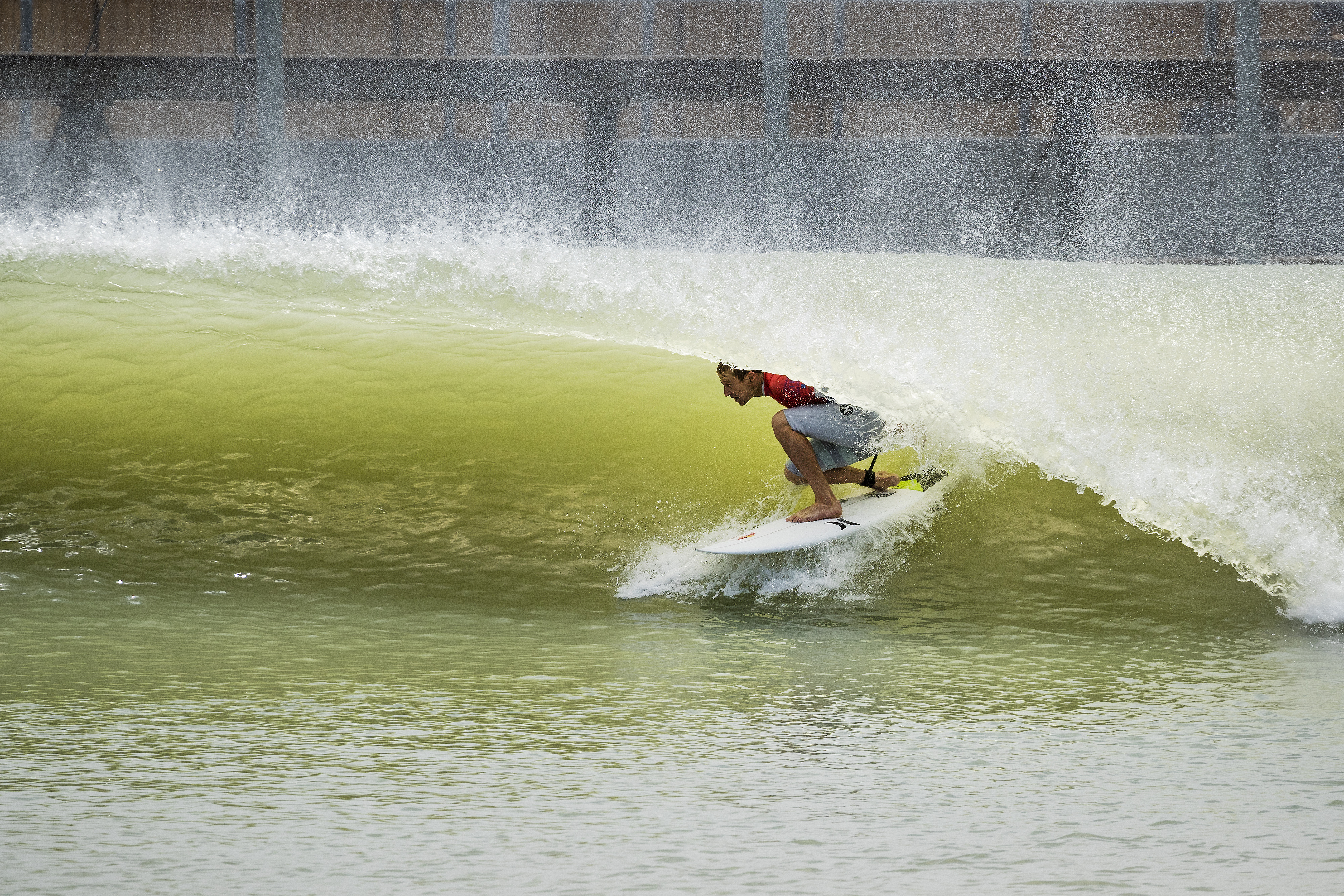 Are Wave Pools Really The Future of Surfing?

The smell of cattle and dust lingers in the stiflingly evening air. It’s 95 degrees as the sun two-steps with the horizon. There’s not a breath of wind. The local casino’s doing brisk business cashing in on regulars’ social security checks. Former world champ Joel Parkinson takes a seat at a blackjack table, with a black, 10-gallon cowboy hat perched on his head.

On the back lawn, a woman sings Waylon Jennings tunes while her backup band infuses the airwaves with a honky-tonk twang. It’s a fitting soundtrack as we’re only an hour outside of Bakersfield, home of Merle Haggard and Buck Owens. This is what Saturday night in Lemoore looks like during the inaugural WSL Founders’ Cup at Kelly Slater’s Surf Ranch.

In recent weeks, the surf spotlight has shown brightly on advancements in wave pool technology. In the midst of the contest in Lemoore, another wave pool facility in Waco, Texas strategically released a string of video clips heralding their rendition of a freshwater wedge. As they say, social media’s been blowing up ever since.

Considering how bad the surf around San Clemente and Dana Point has been in recent months, both pools look like a ridiculous amount of fun, but after spending a weekend in the heart of the Central Valley at the Surf Ranch, I think I prefer a good day on the cobblestones at home.

“Call it wave-riding, but don’t call it surfing,” joked Steve Pezman, the founder of The Surfer’s Journal, a few years back when the wave pool thing was just shifting into gear.

After sitting front and center for all the action in Lemoore, it’s pretty clear Pez knew what he was talking about. Wave pool surfing takes almost all of the variables out of the sport. The last thing I’m saying is that there isn’t a time and a place for man-made waves—there absolutely is— but in my mind, the surf experience encompasses a lot more than ripping a few turns to the beach.

“This is like figure skating or the floor routine in gymnastics or the halfpipe in Olympic snowboarding,” described one spectator in Lemoore. “The surfers should have to tell the judges what their routine is before they catch a wave and then be scored on the degree of difficulty.”

In each heat of the Founders’ Cup, competitors were given a left and a right-hand breaking wave to try and garner a score. There were no dramatic, last-minute rides. No strategical twists. There was no hassling for position or priority. There were no paddle battles. Heck, there wasn’t any paddling at all. Competitors waited in waist-deep water for their wave, took a couple strokes and then did their best to perform on the 700-meter race track. I still can’t figure out why they were wearing leashes? For fans of progressive surfing, it showcased the incredible talents of the athletes. For purists, it lacked the sand and salt.

Not to get too deep here, but the ocean is a source of solace. It challenges us. It humbles us. It enlightens us. It provides. It takes. It’s a retreat from the nonsense we endure on land. It’s a fountain of youth. Over the years, it’s helped soothe the souls of friends battling cancer and other terminal illnesses. It’s eased the minds of other friends battling substance abuse. It gives meaning to kids and adults with disabilities. It helps soldiers coming home from war. It’s there when you need it. It doesn’t discriminate. It’s free, and almost always, it’s good for what ails you.

“Maybe they could at least put some toothless alligators or something in there to make it interesting? Maybe a mechanical shark like the Jaws one at Universal Studios that chases the surfers if they fall off?” pondered another fan in Lemoore.

The Founders’ Cup served as a dry run to the upcoming WSL World Championship Tour event that will take place at the Surf Ranch this September—the contest that replaced the Hurley Pro and Swatch Pro at Lower Trestles. It was an opportunity for contest organizers, production crews, surfers and fans alike to work out the kinks and fine-tune the details before a world title hangs in the balance.

While there’s no shortage of squabbling going on about the place that wave pools should occupy in surfing, perhaps the legendary Phil Edwards put it best when he said, “The best surfer out there is the one having the most fun.”