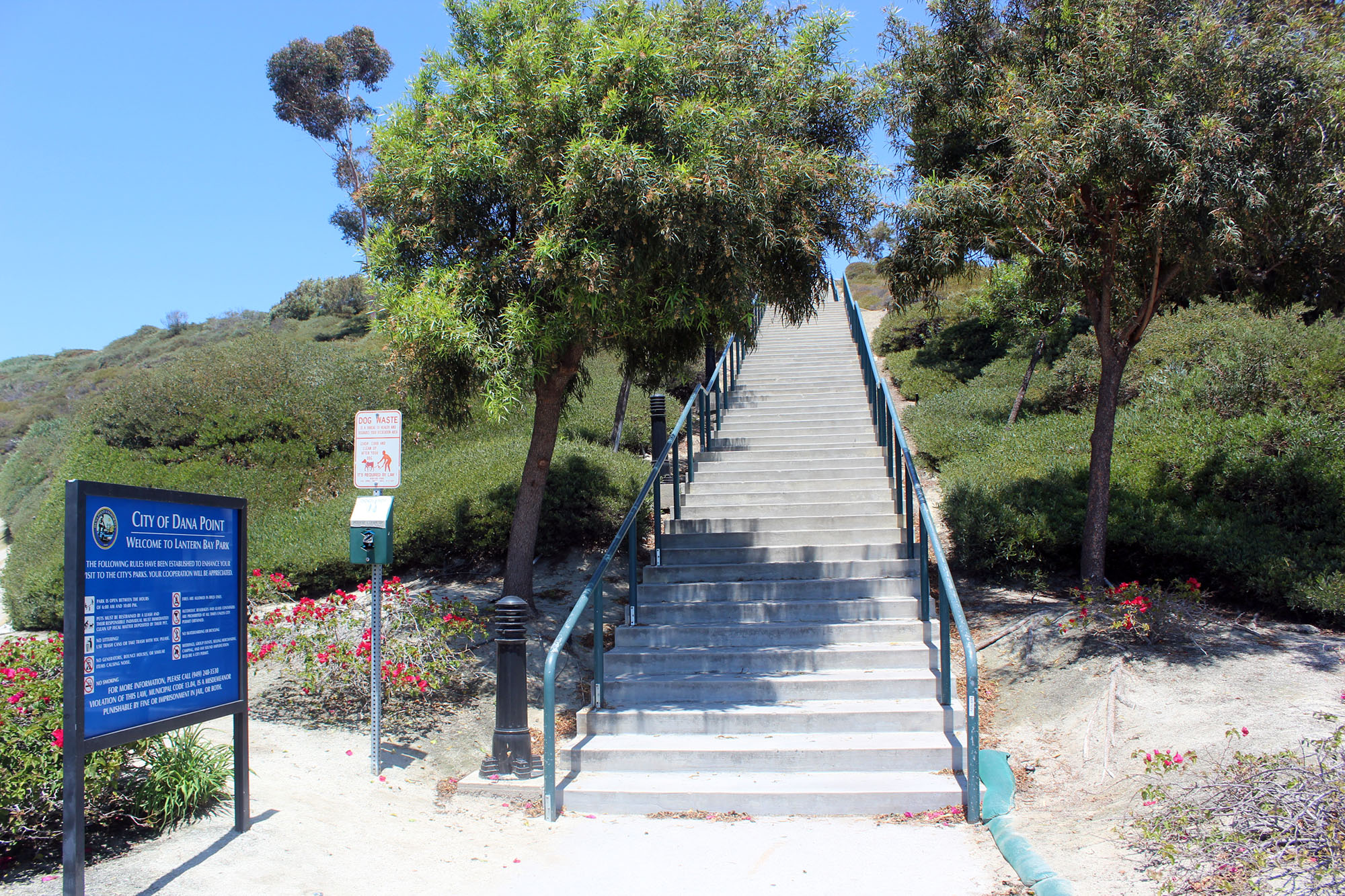 In the next eight to 10 months, Dana Point will be installing a new mosaic artwork on the 118-step stairway at Lantern Bay Park. The mosaic, depicting a cresting wave designed by artist Mia Tavonatti, will adorn the stairway that descends onto Golden Lantern.

The Dana Point City Council unanimously approved the project, authorizing staff to proceed with construction during its June 21 meeting.

“It has been a very long process but each step was necessary to get us to the final presentation,” said Karin Schnell, vice-chair of the city’s Arts and Culture Commission and a member of the ad hoc committee that was formed and tasked with researching for the project.

The public art project has been in the works since 2017, when the Arts and Culture Commission visited all 29 parks in the city and identified Lantern Bay Park and Waterman’s Plaza as top priority locations for public art, Schnell said.

“We didn’t even really know where to begin or what we could do for our 118 steps up to the Lantern Bay Park,” Schnell said.

In 2020, the Arts and Culture Commission formed an ad hoc committee to research and gather proposals for an art piece at the park. City staff and the commission drew inspiration for the mosaic public art piece from the 16th Avenue Steps in San Francisco.

“We started by talking with two other city arts coordinators and the countywide Arts Council for guidance and direction,” Schnell said. “I also spoke with one of the artists from the 16th Avenue steps in San Francisco, which was our largest inspiration for our steps.”

“Their steps entailed strong community involvement plus public and private support,” Schnell continued. “It took them approximately six years to complete, ours is not going to take that long.”

During an Oct. 13, 2021 meeting, the Arts and Culture Commission chose Tavonatti to design the mosaic artwork for Lantern Bay Park.

“One of the considerations the commission found compelling about her artwork, not only because they felt it was beautiful and appropriate to the site, was that she was also interested in hiring local artists to assist with the project and to bring in different community groups to help construct it as well,” Reenders said.

The project will include replacing the handrailing, landscaping and instillation of the artwork for an estimated total of $468,000 according to the city’s staff report.

“Construction would happen off site in her studio and then be installed onto the stairs to minimize the disruption to what we all know are very heavily used stairway,” Reenders said. “(Public Works Director Matt Sinacori) and his team have evaluated how the art is to be constructed and affixed to the stairs so they will be both beautiful and safe.”

While the artist designs the mosaic piece in her studio, the city hopes to work on removing the railing from the top of the stairs and relocate it to the side of the stairs. The city is aiming to have the whole project installed in a two- to three-week timeframe, Reenders said.

During the installation process, the stairway will be closed.

“A lot of people use those stairs for fitness, they run up and they do things, and when that happens, people tend to kick the stairs and trip when they get tired,” Mayor Joe Muller said. “What happens if they damage the mosaic?”

The tile will be installed so that there is an edge at the top of the step to protect the mosaic, Reenders explained.

“The way (Mia) is going to set all the different tiles, and there could be sea glass and stones, she incorporates all these things to make it absolutely stunning, that has all been taken into account,” Reenders said. “Yes, maybe it could get chipped here and there but we have been troubleshooting this for about six months to figure out what the best way to protect the artwork and make it safe for people that do use those stairs for exercise.”

Just like all city property, if the artwork does get damaged, the city would be in charge of maintenance, Reenders explained.

“This has been true to my heart and it’s been wonderful watching it come to fruition,” Arts and Culture Commissioner Maria Elena Banks said.