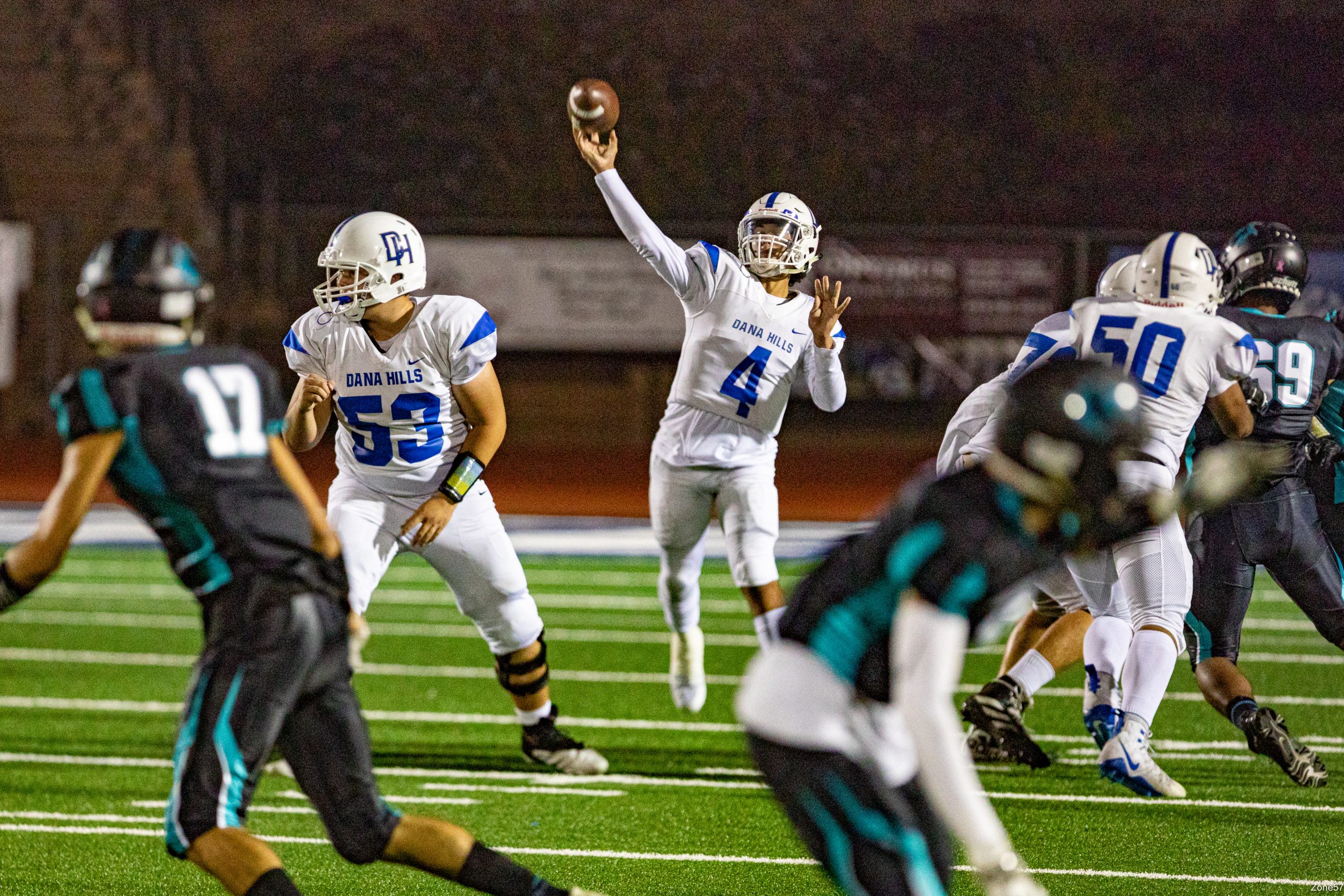 These dog days of summer usually come with signals that the football season is right around the corner.

In a “regularly scheduled” world, summer camp would have closed last week, and fall camp would start next week in preparation for Dana Hills High School’s scheduled season opener on August 21 against Los Amigos.

However, as things go in 2020, “regularly scheduled’ has been thrown out the window due to COVID-19. On July 20, just one day shy of a month away from the Dolphins’ season opener, the CIF State and CIF-Southern Section announced a revised schedule that pushed the opening of football season back to Jan. 8, 2021 and sent all high school sports back into their “wait until further instructions” mode.

“In some ways, it’s a relief,” Dana Hills football coach Phil Skinner said. “Relief that we have a plan. Up to this point, since we got canceled for summer football, we’re still on a wait-and-see thing. Now at least we have a date. Hopefully, that date is to come to fruition.”

Like the rest of the Capistrano Unified School District, Dana Hills was ready to go for summer conditioning camps on July 6, but just ahead of that date and eventual state guidance against all youth sports activities, those plans were canceled before they started.

For now, CIF-SS listed the official date for the first full practices of football season opening on Dec. 14. Whether that date sticks or if there are any conditioning camps (limited or otherwise) before then will depend on Orange County’s ability to physically reopen schools. Based on a state mandate, schools cannot physically reopen until their respective county is off the state monitoring list for 14 consecutive days.

“First and foremost, I really hope we get to have some preseason time,” Skinner said. “I really hope we get face-to-face time, workouts in the weight room. It’s a little bit of a take-a-deep-breath moment, that now we don’t start until December, that we get time to get back on campus and get some time in.”

Though December practices sound good in July, coaches also are aware these dates are still subject to change based on local health guidelines, as they saw for summer camps.

If the restrictions on schools continued deeper into the school year, Skinner said he would hope for a month to prepare for a season. If the shutdowns pushed back or canceled games on Dana Hills’ schedule, Skinner would want at least six regular-season games to salvage a fair and legitimate season. Skinner said potential alternate plans of only playing league games would hurt smaller leagues and put everyone on an uneven playing field.

As it stands now, Dana Hills’ schedule has already changed, in addition to the actual dates.

The revision of the CIF-SS calendar set off a domino effect that saw scheduled nonleague games for school after school eliminated. The revision removed “Week 0” from this football season, which was the week of the season-opening Los Amigos game. This meant that Dana Hills now needed to fill its Week 3 bye week to get a full 10-game schedule.

As football coaches raced to fill their new schedule gaps, they took to Twitter as a weeklong social media frenzy ensued, with coaches, administrators, media members and players sharing their schedules and trying to fit together puzzle pieces. Dana Hills found their fit, as a four-way trade was worked out.

“It was a scramble, an absolute scramble,” Skinner said. “I probably talked to 40 coaches in that time, working deals with our ‘zero week’ opponent, Los Amigos. It worked out good for us, but it was a crazy time. It’s all relief. There’s no complaints in this at all.”

The bye weeks for Saddleback High School in Santa Ana, Magnolia High School in Anaheim, Los Amigos High School in Fountain Valley and Dana Hills all lined up in such a way that allowed each school to easily slide in to each other’s schedules.

Dana Hills will now open Week 1 at Laguna Beach, followed by Week 2 at Trabuco Hills and Magnolia now following in Week 3. After those three openers, the Dolphins begin their journey through the newly formed Pacific Coast Conference.

Until they can get that schedule going, Dana Hills will go back to the format of these last several socially distanced months: Zoom meetings and home workout plans.

“We were going five days a week on the meetings,” Skinner said. “Offense meetings one day, defense meetings the next day. We cut it back to three days. You can only go over so much film and so much of your plans; you get to be beating the horse a little bit.”

From the schedules, to the format, to even the wetter winter weather, everything about the upcoming high school season for all sports will require adjustments.

“Everything’s going to be different,” Skinner said. “The ‘so what, what’s next’ mentality is going to have to work for us this year. We can’t let anything get in our way.”

Season preparations will continue at Dana Hills as the waiting game pushes on.