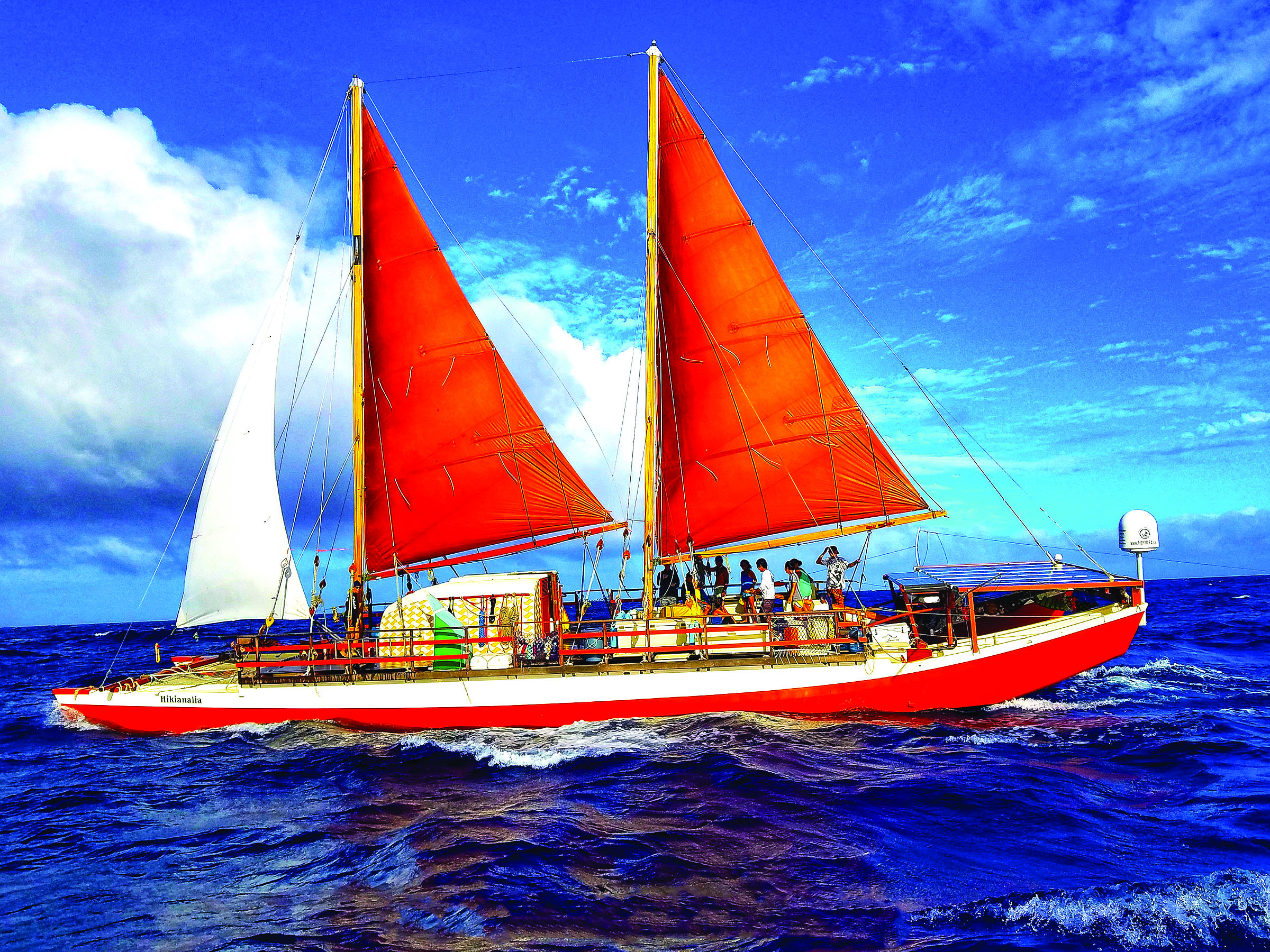 Hikianalia Plans a Stop at Ocean Institute for Education on Sustainability

The crewmembers of the solar- and wind-powered voyaging canoe Hikianalia will be greeted with ceremonial dance and chanting once she makes her stop at Ocean Institute on Oct. 23 for a week-long stay.

The Alahula Kai o Maleka Hikianalia California Voyage is a continuation of the Polynesian Voyaging Society’s campaign to promote an environmentally and culturally enlightened world. The canoe departed Hawai’i in August and has since been making stops along the California coast. Hikianalia is the sister vessel of the famed Hokulea in Hawai’i. Hikianalia was launched in 2012 originally as an escort vessel. She’s now used as a classroom, helping her passengers explore marine resources and provide training for the next generation of voyagers. Each of her hulls includes electric motor power from onboard photovoltaic panels that convert sunlight to electric propulsive energy. Hikianalia has a zero carbon footprint in accordance with the Polynesian Voyaging Society’s mission to care for Mother Earth.

Captain Mark Ellis has worked with the Polynesian Voyaging Society for more than 10 years. He’s leading this year’s crew alongside Captain Bob Perkins on a tour with stops in the Channel Islands, Redondo Beach, Catalina Island, Dana Point and San Diego.

Through a ceremonial exchange, the crewmembers of the Hikianalia will ask permission from California’s indigenous groups to step onto their ancestral land and acknowledge kinship upon approaching the harbor. The welcoming event will begin Tuesday, Oct. 23 at 4 p.m. and feature members of the Acjachemen Nation and the Hula Halau Lani Ola engaging in dance and song. Dana Point city officials will also be in attendance, including Mayor Richard Viczorek.

“We all leave together and we all come back together. When we come into a community, we want to show our respect to the indigenous people of that community, to our family members in the community and the overall community in general,” Ellis said.

On Saturday and Sunday, Oct. 27-28, the crew will offer Public Community Canoe Tours and Outreach Stations at Ocean Institute from 10 a.m. to 3 p.m. Disney’s Moana will have showings throughout the day. For the most up-to-date information on schedules and times, contact the Ocean Institute at 949.496.2274.

“This will be a really amazing time to break down our barriers and come together to learn about our ocean and our culture,” said Jenna Ishii, an organizer for the Society. “The public will get the opportunity to learn how to operate the canoe, talk to crew members and gain a deeper knowledge of caring for our planet.”

After the one-week stop in Dana Point, Hikianalia is scheduled to depart for San Diego before sailing back to Hawai’i. For a tentative port schedule for the California Voyage, visit www.hokulea.com for updates.

“Oftentimes, we approach a new area and we do not know how we will be received. I was once told it doesn’t matter how people feel when you arrive. What matters most is how they feel when you depart. When we arrive, people might be unsure about us. But when we leave, we want to make sure everyone has a good feeling about the experience, about what we learned from one another. We want to receive each other’s culture. We might not be the ones to change the world. But hopefully we can be a catalyst for others to want to leave this world a better place,” Captain Mark Ellis said.

Officials with the Polynesian Voyaging Society say the Fall 2018 voyage has been critical in developing leadership and preparation for an unprecedented trans-Pacific voyage in 2020.