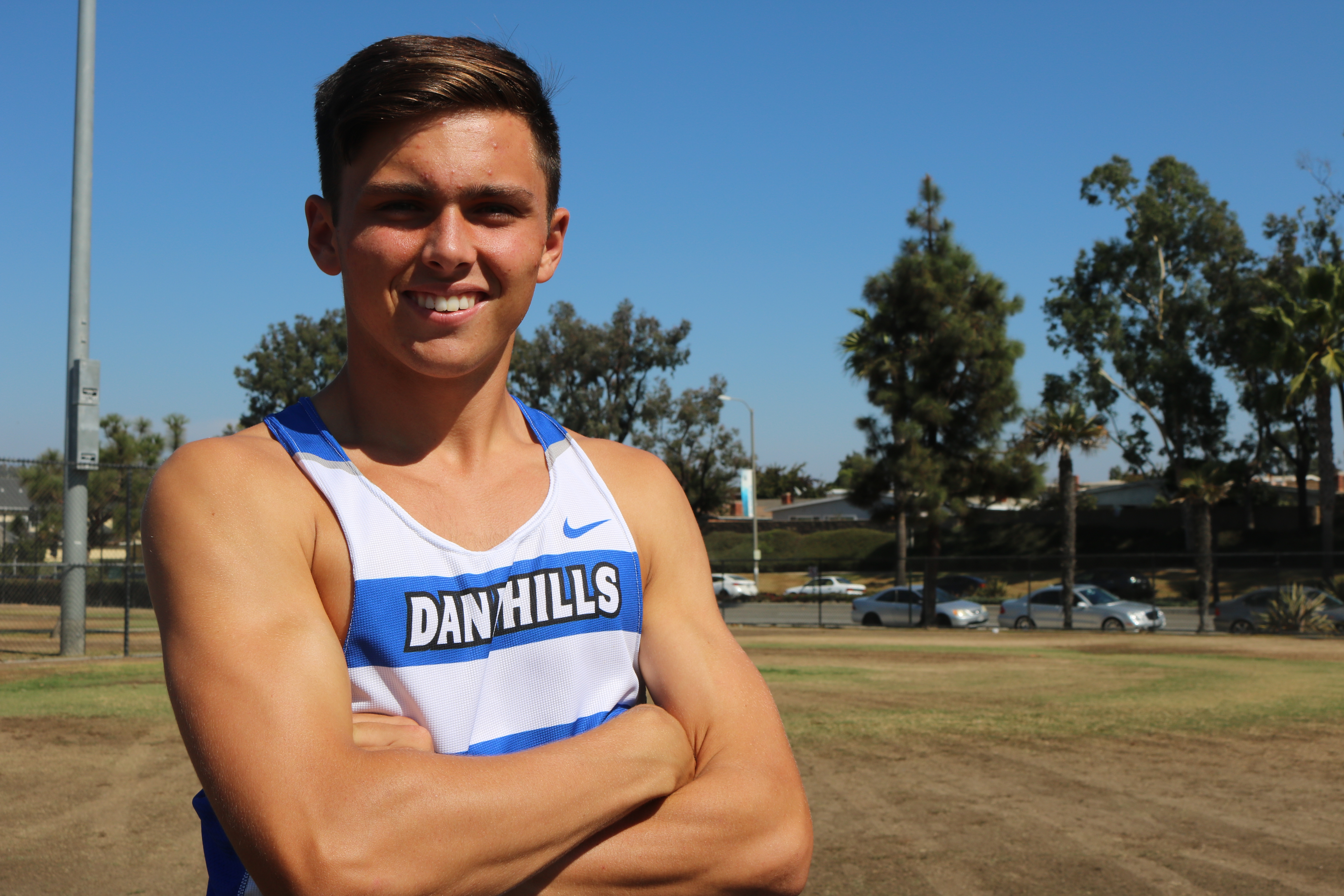 In order to shed heavy expectations and cast off the weight of carrying one of the best cross country teams in the state on his shoulders, Jack Landgraf had to look inward.

The process started with a form of meditation and visualization. It’s a useful tool he picked up this season that helps him block out what he calls the “politics of racing”, which include articles by the media and chatter amongst teammates and fellow competitors.

They all expect him to be at the top of every race he competes in. His performance in a race can usually dictate whether the Dana Hills High School team will win or not every week. The team, and Landgraf, is that good.

The day before every race Landgraf, one of the most accomplished runners in school history, closes his eyes and blocks out the noise.

The senior distance runner sees himself toeing the starting line the next day. He visualizes his opening stretch. He contemplates how he will run up a specific hill, how he will take on a certain section of winding trail and where he could potentially make a move if he needs to overcome a frontrunner. It’s in these moments of planning that he feels calm and is able to quiet the nerves.

“Over the last few weeks I’ve had a lot of stress on my mind. I’m worrying too much about everyone having these high expectations for me,” Landgraf said. “I just need to focus on myself and focus on the team … I just have to run my race, my way.”

The first time Landgraf used the visualization tactic was before last weekend’s Orange County Championships. He was the defending meet champion and felt good about his plan, but was unsure about how he would run the finish. He had only seen the course once before and figured he could improvise his way down the final stretch. Turns out that would come back to bite him, as a slight struggle over the final 200 meters caused him to be overtaken by JSerra’s Anthony Grover and place second as an individual.

It was hard for Landgraf to be disappointed for long, he said, because the Dolphins’ well-rounded roster won the team title for a third straight year. His effort also proved to him that the visualization technique was working. It could be the spark he’s been looking for that sends him on his way to accomplishing his lofty goals, he thought.

Landgraf has always been a gifted runner. At John Malcolm Elementary in Laguna Niguel he would routinely be among the fastest kids in P.E. class. At Marco Forster Middle School, Landgraf completed the Los Angeles marathon while in the seventh and eighth grade.

He broke on to the Dolphins’ varsity team as a freshman. He is a three-time team captain and doubles as a standout in track and field. His time of 14 minutes, 18 seconds in the three-mile is a school record. His 9:04 two-mile time is the fourth-fastest recorded at Dana Hills. He was the 2017 CIF-SS Division 1 3,200-meter track and field champion and has played an integral role on teams that finished runners-up at the last three CIF-SS and CIF State Division 1 Cross Country Championship meets.

The motto of this year’s Dolphin team is “Commitment”. Landgraf wears a blue Nike workout shirt with the word emblazoned on it to most practices. It’s a reminder that all of the Dolphins are on a quest to end the string of runner-ups at CIF together. Each one has to make sacrifices in order for them to get there, Landgraf said.

Landgraf works for Orange County Lifeguards and was able to structure his work schedule around his training, a luxury he wasn’t afforded as a first-year employee last year. He left his mornings, the preferred training time for distance runners, open and placed an emphasis on making every single workout no matter what.

It’s tough for him to stay home while the Dolphins football team plays on Friday nights or say no to a group of friends wanting to hang out the night before a big workout. But Landgraf knows his teammates are making the same choices and now saying no has become easier.

“I’ve kind of been focusing on myself and figuring out all my training so I can get State champ. But at the same time we have our team goal, which is to win state and go to nationals,” Landgraf said. “I think once I started to realize not only am I running for myself, but I’m running for my team to do better, that was huge.”

Determined to start his final high school campaign out strong, Landgraf blew away the field at the Dana Hills Invitational on Sept. 23, finishing in 14:17.9 to claim his home meet’s title for a third straight year.

Two weeks later, at the Clovis Invitational at Woodward Park in Fresno, he hit an unexpected snag. As he trudged up a hill at the two-mile mark he began to slow down. The front pack passed him and he “checked out mentally”. He finished nowhere near the top and now refers to it as the worst race of his life.

Struggling to find an answer as to why he uncharacteristically had a mental lapse while racing, Landgraf turned to his sports psychologist for help. The visualization technique he now uses was a product of their talks.

According to Dana Hills coach Craig Dunn, another piece to Landgraf’s success is something found at the core of every great runner—a strong will.

“You either have a positive attitude or you don’t,” Dunn explained. “Anyone can get out there and run but to do what these guys do day-in and day-out and compete at the level they’re at definitely takes a lot on the mental side. It’s about putting one foot in front of the other and your attitude changes what happens in the end. He’s a great example of having that good attitude.”

The race at Clovis and his subsequent second-place individual finish at the OC Championships were turning points, Landgraf said. He used to hear all the noise, thinking he had to finish in first place. Now he just focuses on what he can control, like running the race he envisions.

Landgraf and the Dolphins will run at the Riverside Invitational, site of November’s CIF-SS Finals, on Saturday, Oct. 21.

While out on the course Landgraf will be surveying every bit of the terrain. He’ll remember where he can push his prodigious talent to overtake opposing runners. He’ll store that information away, hoping it will come in handy in just a few short weeks.

“This year I have huge goals and high expectations of myself,” Landgraf said. “I don’t think there is anything holding me back besides myself and making the right decisions when it comes to the race.”