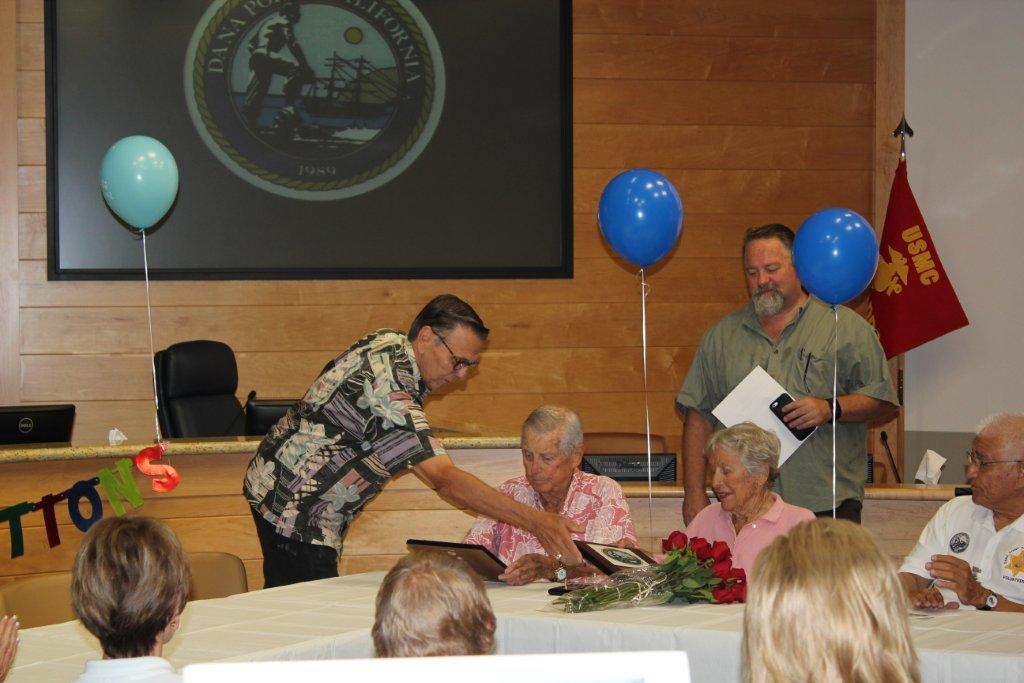 VIPS Honored for More than Two Decade of Service

After more than two decades of service to the city of Dana Point, Volunteers in Police Services Richard “Dick” Ranger and wife Carol Ranger were honored with a retirement party on Aug. 26 at City Hall.

The couple joined VIPS in January 1993, and in the 22 years since, have contributed more than 9,600 volunteer hours total—4,738 for Dick and 4,924 for Carol. Both have received recognitions too numerous to list here but include a 1995 Community Service Award and a 2006 President’s Volunteer Service Award from the USA Freedom Corps for both. The Rangers have been married for 65 years and are 29-year residents of Dana Point. They now reside at the Fountains at Sea Bluffs.

The retirement party also served as a celebration of the couple’s birthdays—Carol turned 89 on Aug. 9 and Dick was 92 on Aug. 27.

The Rangers said they chose Dana Point because they shared a desire to retire near “one ocean or another” and found the city’s climate and small town feel superior to East Coast options.

“The service to Dan Point by our VIPS is invaluable,” said Dana Point Police Services Deputy Bernice Lohrman. “They are great ambassadors for the city.”

According to VIPS coordinator and Administrative Deputy Rachel Puckett, VIPS have donated more than 152,000 hours of their time to the program since its inception in 1992 and saves the city approximately $100,000 per year. The program currently has a group of 21 volunteers.

Since 2014, the city has honored and bid adieu to a total of four VIPS—including the Rangers—with more than two decades of service.

Fran Cain retired from VIPS in January with a total of 13,300 hours of service.

“To me their service speaks volumes of their character,” said Lt. Russ Chilton, Dana Point Chief of Police Services. “To retire from a career and then make a decision to volunteer their free time to the community is tremendous. These people were truly part of the Greatest Generation—humble, generous and selfless—we should all take a lesson from them. When I look back at all the volunteers I’ve worked with over the years and hear their stories, I am blown away by the incredible individuals who have been and are a part of VIPS. I want them to know how special and valuable they are to both the city and police services.”