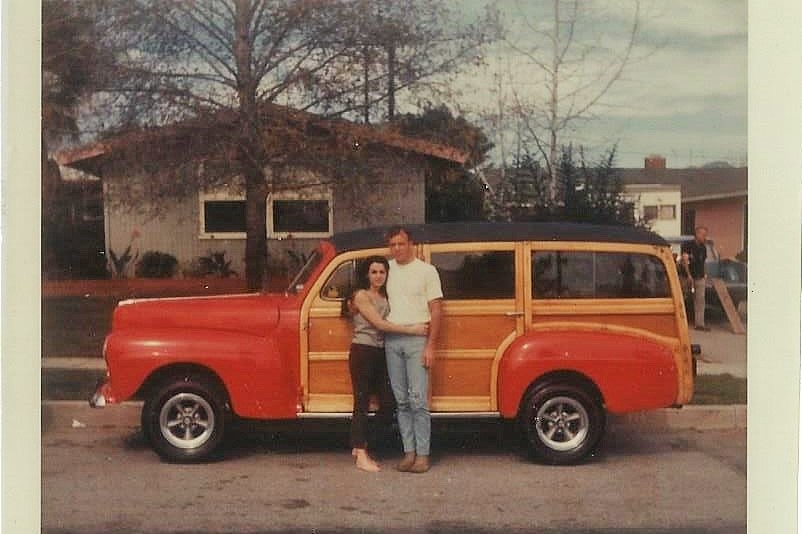 Even the backside of the visors painted with the signatures of local legends such as Phil Edwards, Micky Munoz and more of Janeann and Gary Clark’s 1946 Canadian Mercury, are soaked in storied California history.

The Clark’s Mercury and hundreds of other woodies will thunder into Doheny State Beach on Saturday, April 28, and April 29, bringing with them similar tokens of California beach culture lore as they gather for the 21st Annual Doheny Wood show presented by the Southern California Woodie Club (SCWC).

The Clarks reside in Capistrano Beach and were founding members of the Southern California Woodie Club. Now, Janeann and Gary are the president and assistant to the president, respectively, of the more-than-250-member club.

The Southern California Woodie Club hosts monthly shows during the summer months from San Diego all the way to Santa Cruz.

“Everybody loves a woodie,” said Janeann. “It just brings a smile to people’s faces.”

“This car, SUFRGRL, is actually Janeann’s car,” explained Gary. “We, just a few years ago, finally sold the 1948 Ford woodie that Janeann actually drove to high school while I was away at Vietnam.”

Woodie production ground to a halt for the most part in the early 1950s, but saw a resurgence in popularity in the 1970s due to the trend in California beach culture. Nowadays, fond memories and attachment to California lore keep these moment-in-time cars a prized collector’s item.

The Clarks mentioned there will be a wide variety of woodies including stock cars as well as modified, contemporized versions.

Janeann said although some people are purists, preferring woodies with all original stock-issued parts such as large drum brakes, upgrades and contemporary woodies have their positives.

“Modernizing your woodie keeps them on the road,” Janeann explained. “With things like modern brakes, you can be on the road, in and out with regular cars. Keeping the car moving, which is good for them, and it gets them seen.”

She mentions that today, the most dangerous part of driving her late 1940s vehicle is distracted drivers trying to take photographs while hanging out the windows.

In addition to drive-by photo spreads, the Clark’s expressed that a large part of passing along the tradition and heritage of the woodie car rests with artists that have continued to feature the woodie as a central piece of California beach culture.

One such artist is Jennifer Brennan from Capistrano Beach who created the poster and official art for this year’s Doheny Wood event.

“I grew up in Dana Point and my favorite view of Doheny has to be from Palisades Hill,” Brennan said via email. “It captures what I see as the quintessential Southern California lifestyle: surfing, beach volleyball, skating, biking, sun bathing, camping and enjoying our beautiful beaches.”

Brennan graduated from San Clemente High School in 1987 and now proudly calls herself the mother of three teens. She has been painting for over 35 years.

“I love to create beach and ocean landscapes,” Brennan said. “I’m currently creating acrylic and resin pieces and have many new beach abstracts that are inspired by my love of nature and the ocean.  All of my pieces are one-of-a-kind originals, and I love working on commissions. I will have a booth at Doheny Wood to showcase my art, and there will be a wide range to purchase from.”

Brennan mentioned she will also be featured in the Doheny Artwalk on June 10.

Doheny Wood begins at 8 a.m. with a Marine Corps color guard entrance. Three charities will be recognized this year including the Camp Pendleton branch of the Wounded Warriors, local California State Park Junior Lifeguard programs and the Huntington Beach Youth Shelter. Each of the charities will be receiving checks for $1,000 courtesy of the SCWC.

Adoptable Pet of the Week: Gerard