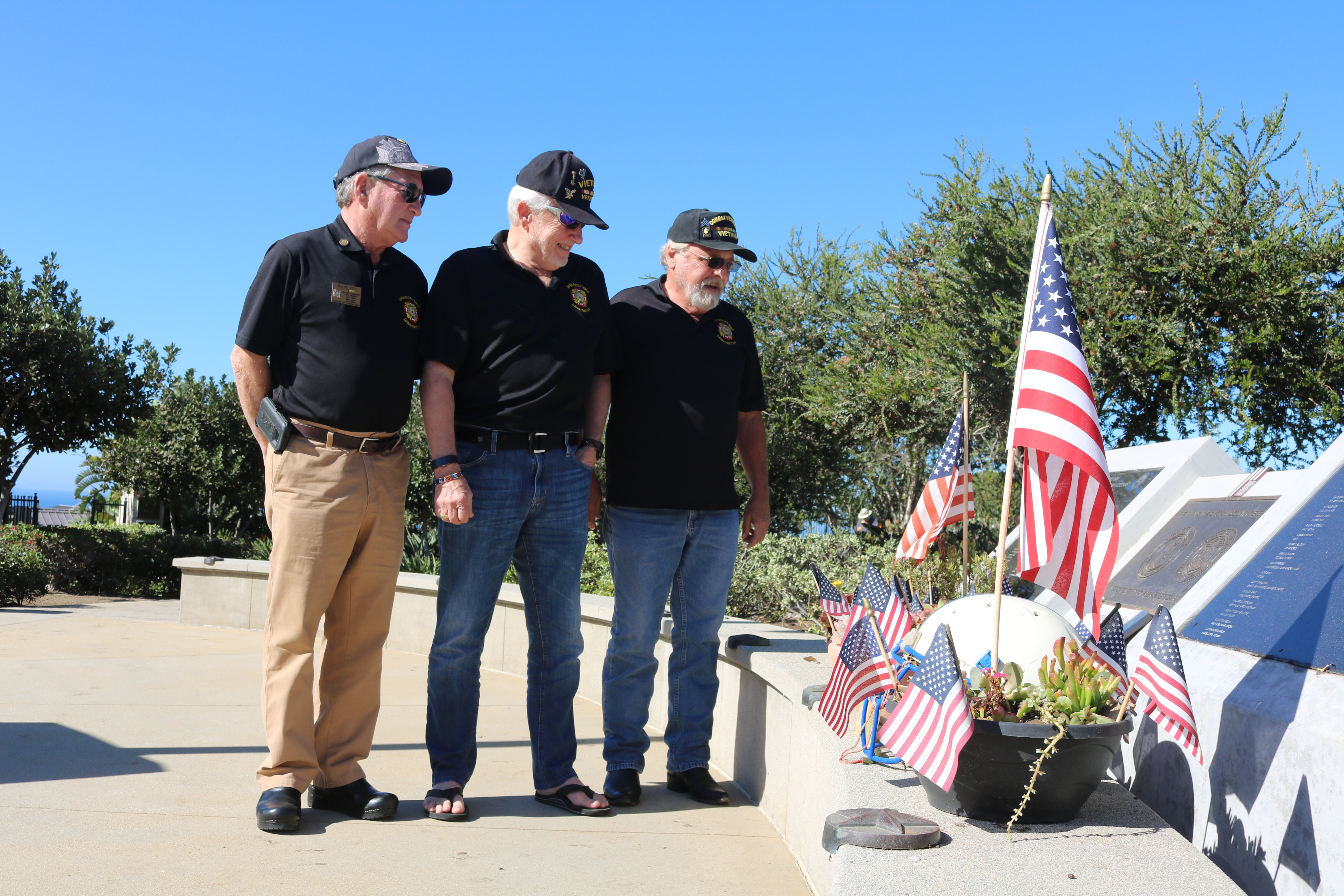 Veterans Day: A Time to Reflect, Support Those Who Served

Inside of Dana Point City Hall, seven veterans gathered around a table. They all served in different branches of the military, but they all have one common goal: to help other veterans in any way they can.

“We just give back, that’s just what we do,” said Bob Fowler, post service officer at Dana Point’s Veterans of Foreign Wars Post 9934 & Auxiliary.

As Veterans Day approaches, the former service men and women reflected on what the day means and why people should be involved in celebrating it.

“It’s a day to honor veterans, to remember what they went through and what they gave up,” said Marcia Kuehl, a Marine veteran and the post’s adjutant. “Some men gave up their whole families, their lives. On Veterans Day, we’re supposed to honor their memory.”

The veterans around her agreed.

The veterans said they believe the passing of an older generation of veterans—those who served in World War II, Korea and Vietnam—affects society, but there are ways to make it so their memories are kept alive.

“I think we need to start back at the young levels with what it means to be America,” Kuehl said.

She said when she was younger, she remembers veterans going into schools to talk about their stories and showing their pride for their country.

She added that they also need to share their stories with younger generations of veterans.

“Part of our job is to carry the torch, and have someone remember us, (and) do the things that we pay homage to,” Kuehl said.

On Del Obispo, inside the Dana Point Community Center, Site Director of the Senior Center Vanna Murphy has seen multiple veterans die in the past year

“There have been eight veterans who have passed away since last September, its affected all of us,” Murphy said. “The center has gone through a lot in past year; these men we lost dedicated their lives to our country.”

Murphy said there were two men that linger in her memory. One veteran was a Purple Heart recipient.

“He would bring it in all the time, he was so proud it,” Murphy said. “I think it made people realize what they’d done.”

She said another man was a colonel who flew a plane at 17 years old.

Outside her office, three WWII veterans were participating in the center’s Halloween celebration. Each of them have different stories and backgrounds, but all say they were treated with respect when they came home.

Howard Severance, a WWII Marine veteran and a Dana Point resident, said he hitchhiked home to Orange when he returned home.

“I got discharged in San Francisco, hitchhiked home in uniform, and people picked military up like that in those years,” Severance said while snapping his finger. “I’d just get in the car, and they’d ask where I was going. I was blessed. I don’t think I stood anywhere more than 10 minutes.”

On the other side, veterans in the Post’s office said it was very difficult for those who served in the Vietnam War to return home.

“When we came home, we wouldn’t even talk to each other,” Fowler, a Vietnam veteran said. “I took my uniform off at the airport because I didn’t want to get into fights.”

Kuehl said she saw her grandfather and father return from World War I and II with respect, but when her brother returned, it was the opposite.

“They were not respectful of the people I knew and loved that served,” Kuehl said. “I had to watch my brother come home, and he didn’t get anything. I would ask myself why society had forgotten the veterans.”

Today, the group sees veterans being treated the way they believe they should—with respect. Though, they all agree that respect should extend past Veterans Day.

“They put their lives on the line, and we always look at the veteran but we need to look at the families and their kids,” Fowler said.

Murphy said this is important because some of those veterans, like Severance, were married and had families that were beginning to grow.

“I was married, and we had a baby growing, so I was anxious to get out and get home,” Severance said.

There are several opportunities to commemorate Veterans Day in Dana Point this year.

On Friday, Nov. 4, Dana Hills High School will be hosting the annual Honor the Valor football game. Each member of the football team will wear the name of a veteran on their back to show support.

On Friday, Nov. 11, there will be a Veterans Day ceremony at the Dana Point Veterans Memorial at 10 a.m. The program will include an unveiling of the updated memorial plaques, which list the names of people who have died during the past year and who were members of the VFW Post 9934 or family members of Dana Point residents. The monument is located on Selva Road at Strand Beach, off of Pacific Coast Highway.

At the Community Center, Murphy said veterans will be recognized. The room will be decorated in red, white and blue, and each of the veterans will be asked to talk about an experience they’ve had in their military careers.