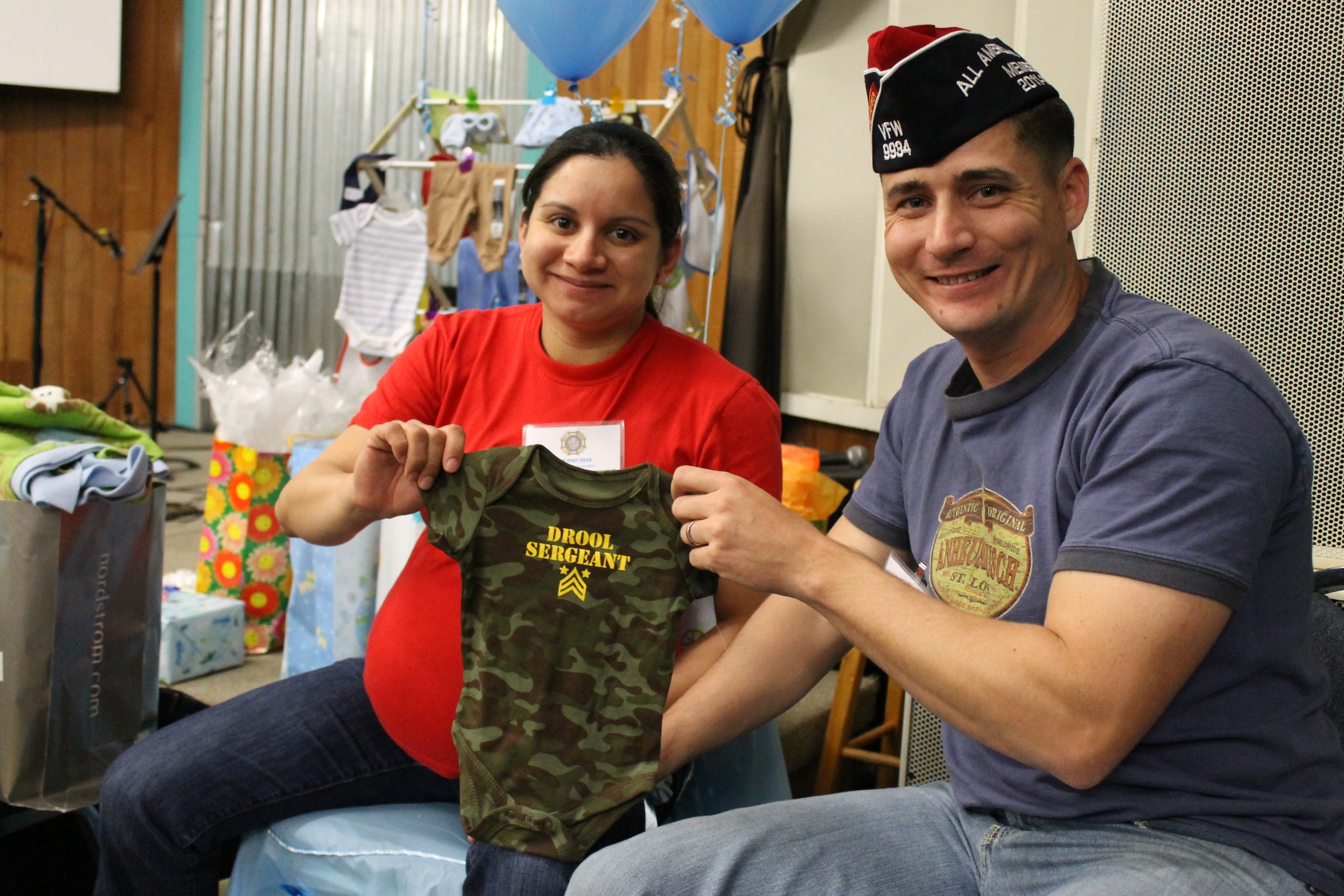 For the first-time in Post 9934 history, the Veterans of Foreign Wars put on a baby shower

Wiley Hall keeps watch, ready to intercept signs that could blow their cover.

You might think this is Ramadi, a spot along the Ho Chi Minh trail or the beaches of Normandy. But tonight, Hall’s mission is different. There are no enemies. No gunfire.

But the Army medevac helicopter pilot is on high alert.

Scouring the parking lot of South Shores Church, Hall secures his comrades’ secret. Because tonight, members of the Veterans of Foreign Wars Post 9934 are throwing a surprise baby shower.

Capt. Larry Iverson, a Marine, met Army Sgt. Lucia Hernandez back in 2005. After numerous letters, countless phone calls and tens of thousands of miles, they are here—patiently awaiting the arrival of their first child, a little man with a tightly kept name.

Col. Joe Snyder leads the monthly meeting—it’s business as usual. But hidden behind a whiteboard, a drying rack is delicately decorated in baby blues, greens and yellows. The bibs, blankets and binkies are all wrapped and tucked away for the unsuspecting mother.

“What happened to my Vietnam combat buddies,” asked Bob Fowler as the men “oohed” and “aahed” at camouflage onesies and denim overalls embroidered with a helicopter—Hernandez worked as an Army mechanic on Blackhawk helicopters.

Affectionately called Lou by her comrades, Hernandez runs circles around the men of the post, Fowler said. She is petite, mighty and at eight-months pregnant still helps with the cleanup after a meeting (and her own baby shower) and signs up to volunteer at this year’s Festival of Whales—a commitment her husband knows well.

“We couldn’t call each other when we wanted. But she wrote me everyday. She is a good woman … and I just knew,” Iverson said, of the woman he knew would be his wife when they first met. Iverson was based at Twentynine Palms, Hernandez at Fort Hood, when a mutual friend introduced them.

The pair met before Iverson’s first deployment to Iraq in August 2005.

In December, half way through Iverson’s seven-month tour, Hernandez was deployed to another region of the country. Their relationship endured deployments to Iraq, Afghanistan and Japan—during the latter Lucy (as he calls her) called with the good news—they were going to be parents.

Hernandez retired from the Army in 2009, after nine years of service and two deployments to Iraq. They married on September 27, 2010.

Snyder cuts the meeting short. The fellows of the post nonchalantly fill their coffee cups and chat with one another as Iverson casually guides Hernandez out the front door. With Lou out of sight, the men scramble to arrange presents—a crib, car seat, stroller, diapers and outfits to name a few.

The meeting is called back to order. Every one returns to the room. When Lou enters the place erupts with applause and by the look on her face, they’ve done it. With the element of surprise maintained, the Army, Marine, Navy and Air Force veterans from WWII, Korean and Vietnam wars are victorious.

And Larry and Lucia have all the necessary supplies for their next mission.