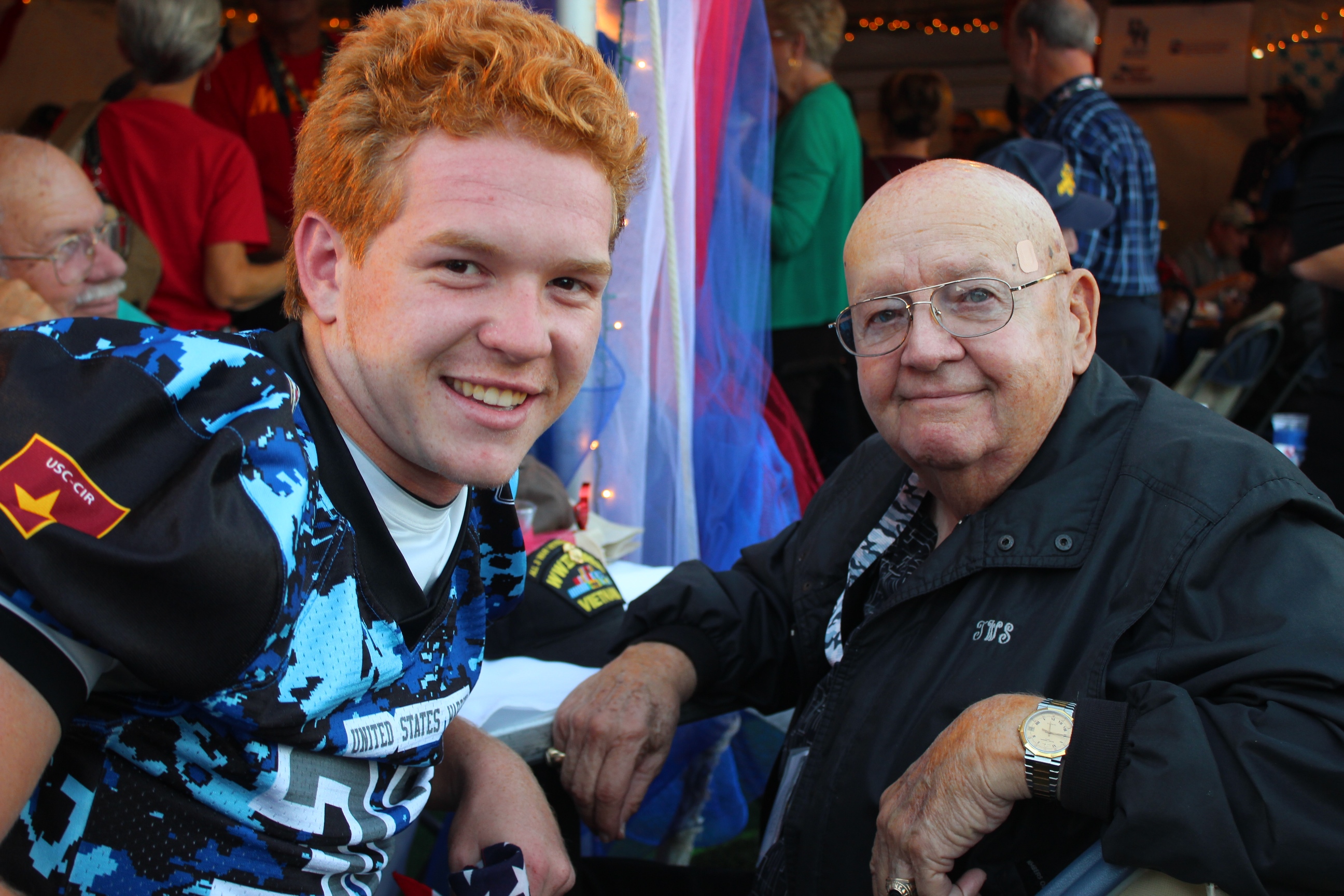 Story and photos by Andrea Papagianis, Updated with photos Friday, November 8 at 4:00 p.m.

John “Bogie” Boegeman wasn’t much older than the young man honoring him Friday night when he first drenched his combat boots in motor oil, protecting his feet from minus 65 degree temperatures.

Boegeman served in the Korean War for the U.S. Air Force. One day a medical transport landed and Bogie rushed to the side of a young soldier who had lost extremities in a blast. The young man looked at him and said, “Hi Lucky,” Boegeman recalled. It is a moment he will never forget.

Staff Sgt. Boegeman and 70 other veterans were honored at the Honor the Valor football game. The benefit game began last year with the backing of the program’s booster and varsity coach Todd Rusinkovich, to pay respects and support local veterans associations.

Veterans gathered at the field Friday as the sun settled over Dana Point. Greeted by players bearing their names on blue, camouflage jerseys, they shared their combat tales.

Tyler Dickenson wore his own surname Friday night, paying tribute to his great-grandfather William, who served in the Air Force during World War II. William “Bud” Dickenson passed away this fall shortly after celebrating his 70th wedding anniversary with wife Donna. Surrounded by her grandchildren, Donna was presented with Tyler’s game jersey.

“For our kids, this is one of the best ways they learn,” Allemann said. “This generation of students is one of the last that will be able to hear directly from a surviving WWII veteran and share in their experience.”

The night’s teachings go far beyond the football field.

In a pre-game ceremony, Col. Jason Bohm, commanding officer of the 5th Marine Regiment, set a tone for the tribute game, calling on players, and the community, to take another moment to honor the sacrifice servicemen and women continue to make.

“Since this war that we are in began in 2001, our nation has sustained approximately 30,000 casualties,” Bohm said. “To put that into perspective for you, according to the 2012 census the total population of Dana Point is just over 34,000.

“So, if you can imagine nearly every single citizen of this community becoming a casualty,” Bohm paused, “that is the cost of going to war. That is the cost that your veterans are paying.”

For Boegeman and the other veterans honored, the night was an affirmation of their service.

Boosters and players raised funds all season long toward a $50,000 goal. Clay Wilemon, president of program’s booster 12th Man Club, said the organization is on track to surpass last year’s $30,000 mark. Proceeds from the game will be donated to the Veterans of Foreign Wars Post 9934 and the Dana Point 5th Marine Regiment Support Group.