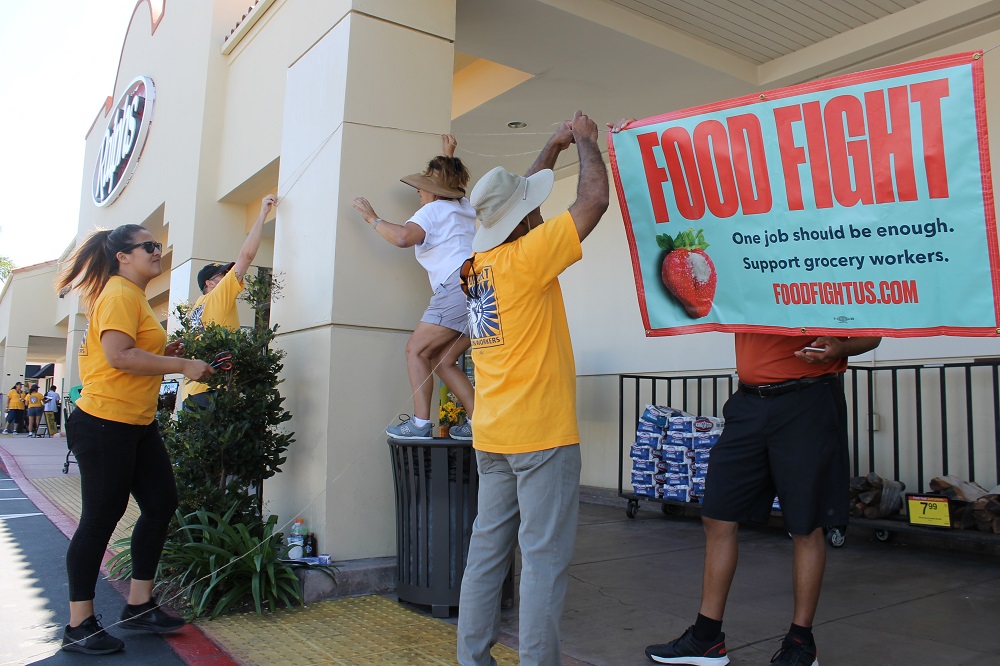 By Cari Hachmann and Lillian Boyd

The United Food and Commercial Workers organized demonstrations at several Ralphs stores in San Clemente and Dana Point on Tuesday, Aug. 20, as part of a 10-day protest within the region to demand fair wages and better treatment for grocery store workers.

“The employees are a little upset that Ralphs gave their executives a 32% wage increase in the beginning of the year, and they’re offering less than 1% to their employees,” Huffman said.

Greg Conger, the union president for UFCW 324, said negotiations with the grocery store executives seem to be going nowhere.

“So now we are taking the next steps in notifying customers of a potential strike,” he said.

Conger said that contracts expired March 3 and the union has been negotiating on and off since then.

After the latest round of talks, UFCW stated on its website that the union had presented several comprehensive proposals on health care and wages, but management’s response was to offer (employees) only another nickel a year.

“We are not asking to hit the jackpot,” said Huffman. In today’s economy, she said grocery store workers are struggling to survive and provide for their families on current wages, which she said hover between $12 and $15 an hour.

Representing grocery workers across Southern California, UFCW 324’s goal is to help protect and improve the livelihood of all workers, according to its website, ufcw324.org.

Conger said this is the first time the union is rolling out a text-message notification system to customers. Early warning alerts will be issued to subscribed cell phone numbers six hours ahead of a strike.

“We’re asking for maintenance of our health care plans, pension plan, and a reasonable wage increase. And we’re asking for customer support. As a courtesy to our customers, we want them to be able to plan ahead in the event of a strike,” Conger said.

John Votava, a spokesperson for Ralphs, provided a statement on behalf of the company.

“The negotiations process can take time to reach reasonable solutions that are best for our associates, our communities and our company,” Votava said. “Ralphs is working toward an agreement that affirms its commitment to associates, bolsters the company’s long-term success, and ensures its continued presence in the community.”

Votava added that customers “will find all Ralphs stores throughout Southern California accessible, fully stocked with fresh merchandise and staffed.”

The UFCW Local 324, which is based in Buena Park, plans to take its protests north, demonstrating at 190 stores within the region to alert as many customers as possible, according to union representatives. Residents can text “NOTICE” to 23396 for alerts and updates on the Ralphs store strikes. According to Votova, company leaders and union officials will again meet on Thursday, Aug. 22 through Sunday, Aug. 25 to continue to work toward an agreement.