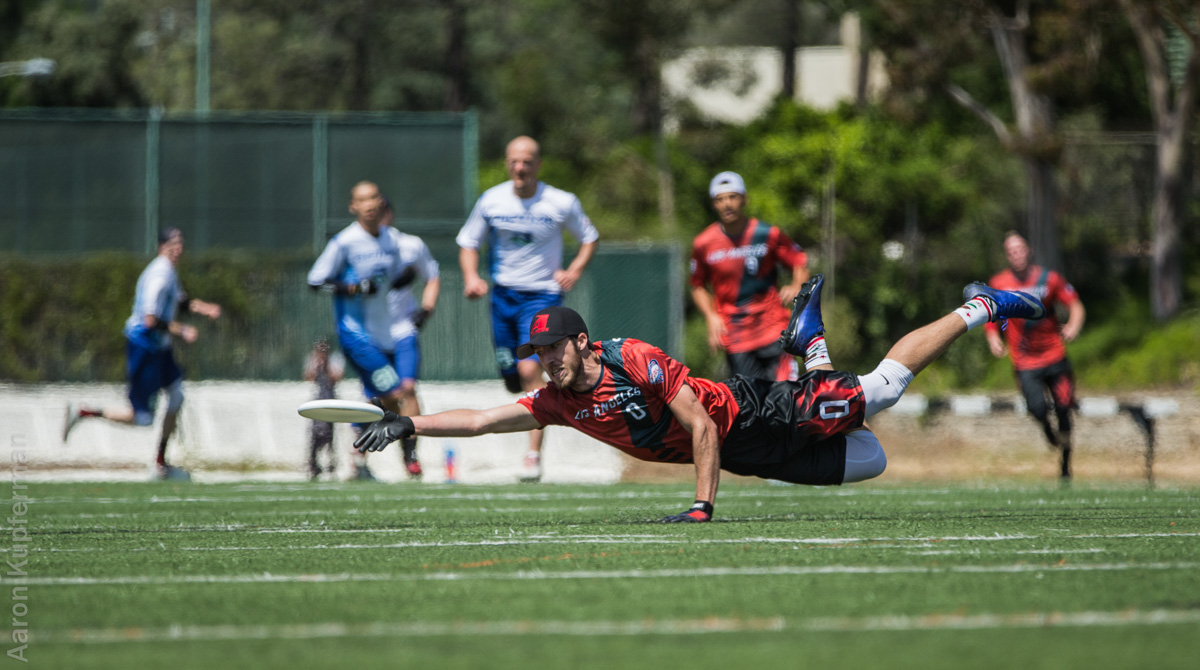 Daniel Smeltzer was first introduced to ultimate Frisbee in freshman P.E. class at Dana Hills High School. The fast-growing sport was beginning to take hold in the Southland, and Smeltzer and his buddies gravitated toward it.

His passion for the free-flowing game took on new meaning when he walked on to campus at Cal State Long Beach in the fall of 2004. Smeltzer joined the school’s ultimate club team, and eventually became the captain.

A career in business took him on a different path in the following years, but Smeltzer never let ultimate stray far from his mind.

A chance business proposition materialized in 2014 that Smeltzer could not refuse. He was asked to come on and become a co-owner of a professional ultimate Frisbee franchise in Los Angeles, and he bought in.

Now in their third season, the Los Angeles Aviators are in the hunt for the American Ultimate Disc League championship, and are attempting to grow their fan base and grab a foothold in L.A.

We caught up with Smeltzer, who runs the sales and logistics department for the team, to talk about his love for the sport, how he became a co-owner of a pro sports franchise and the Aviators’ historic season.

Dana Point Times: You’ve been around the sport for a while. Have you seen its popularity rise at all since you started playing in high school?

Daniel Smeltzer: In 2015, there were 5.1 million active players of ultimate in America. It’s grown to a point where almost every university and college across the U.S. and Canada has an ultimate Frisbee team. That’s really what drives players into the professional leagues. There are also vibrant youth programs in places like Seattle, San Francisco and Austin that are critical for providing a pipeline of players that come into college.

DPT: Why did you want to get involved with a professional team and become a co-owner?

DS: Ever since I learned about the sport, I got more into it. I come from a (background) where my current job is sales for a transportation and operations company. We move goods for businesses. With my experience and love for the sport, (the other owners) and I saw an angle for me to fill a role, which we needed for both sales and operations. There is a ton of travel involved with players figuring out hotels and flights and rental cars so that was something I was well-suited for.

DPT: How does it feel to be a co-owner of a pro sports team?

DS: It’s pretty exciting. I would never have thought that I’d be in this position. I just had a real passion for the sport and where it was going and I’d love for this to be a full-time job in the future … But it’s something that’s exciting to be a part of given the passion I have for the sport and seeing it develop.

DPT: The team is having a great year and you’re in a playoff race. How exciting has this season been for you and the team?

DS: It’s a really tight race in the west division, it’s insanely competitive. Five of the six teams in the division (currently) have a spot in the playoffs. We’re tied for second and we’re one game behind the first-place team with three games to go. We’ve never won a league title. Last year was the first time we reached the playoffs. This year looks to be our year where we make it all the way.

DPT: What’s been the team’s biggest strength this year?

DS: Our team has a little bit of a different approach. If you look at the stats overall in the league, some teams are very reliant on their star players. Our team has depth and that’s been to our advantage. We have some star players like Bryan Nguyen, who was voted All-Star player of the AUDL last week, and we have other guys who are just huge contributors. So while Brian might be leading our stats, he may not be in the top-10 in the league. The wealth is spread amongst the players on our team.

DPT: What makes ultimate Frisbee stand out in a saturated sports market like Los Angeles?

DS: We offer a unique sporting experience where it’s more of a community feel. Especially at this point when our average game is netting around 400 people. There’s just a tremendous community spirit. And it’s a competitive price in terms of a game day experience. It’s basically the price of a movie ticket for the whole family to see a pro sports experience.

For more information on the Aviator’s season and remaining schedule, visit www.laaviators.com.