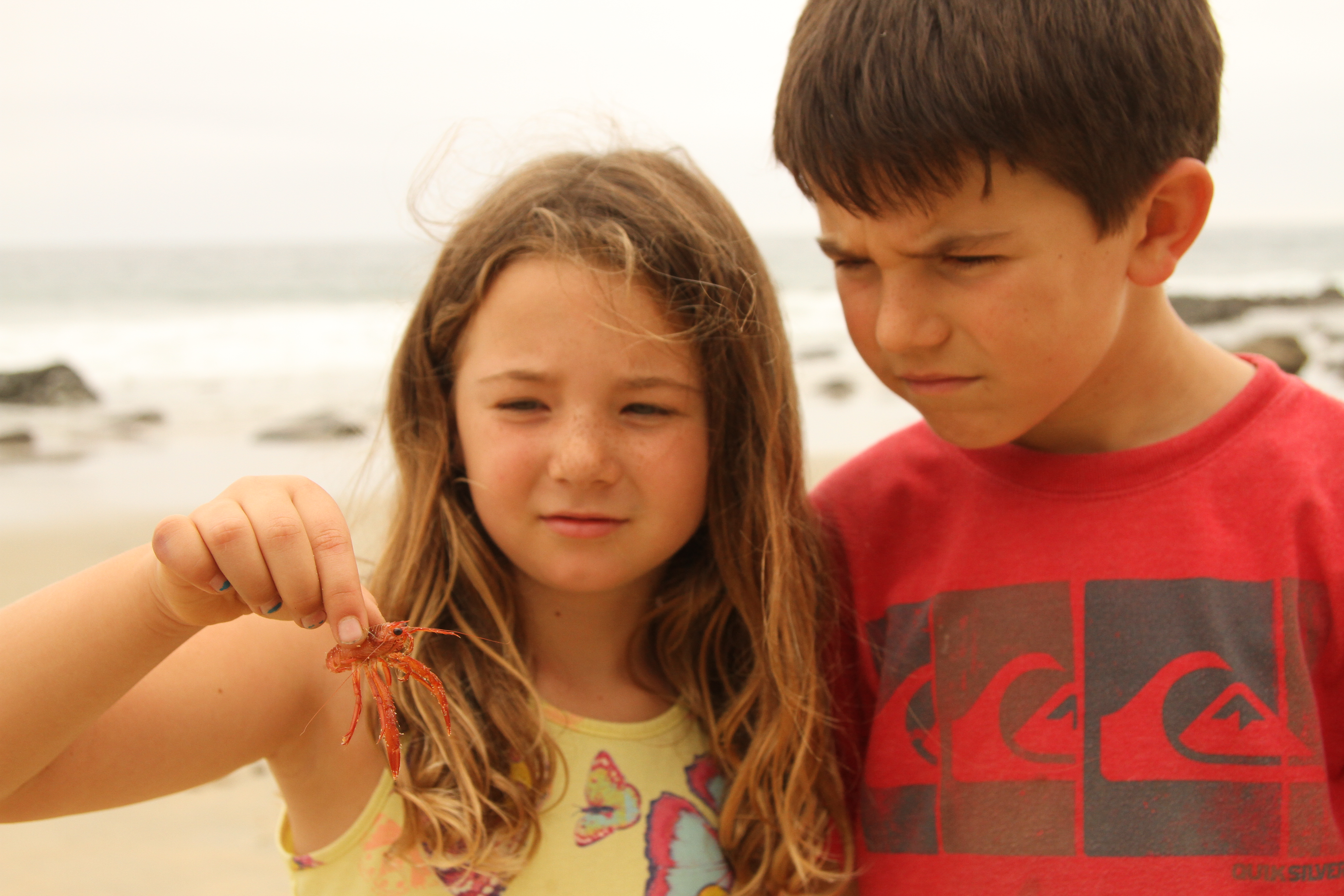 Tuna Crabs: Is El Niño Rolling Out a Red Carpet?

At first glance, Salt Creek Beach in Dana Point looked as if a plush red carpet had been rolled out atop the sand on Sunday. But upon closer inspection, beachgoers were astonished to discover the crimson blanket was actually made up of hundreds of thousands of wriggling tuna crabs.

The tuna crabs, also known as pelagic red crabs, or by their scientific name Pleuroncodes planipes, have been causing quite a stir, making appearances all along the Southern California coast over the last few weeks and leading many to speculate their appearance is a predictor of an upcoming El Niño weather event. The abundance of crabs has also brought tuna in greater numbers and much larger than normally present this far north of Mexican waters.

The crabs, typically from 1 to 3 inches long and resembling tiny lobsters, have been a popular subject of news reports and social media posts from Newport Beach to San Diego, as the site of so many on the beach is a relatively rare occurrence, one that longtime anglers say precedes El Niño weather patterns and makes for some exceptional fishing.

Anglers are fairly familiar with the creatures but normally see them in deeper water and much farther south in warmer water near Baja California, Mexico.

“This year we started seeing the crabs nearby in deeper water in about February,” said Brian Woolley, captain of the Dana Wharf Sportfishing vessel Sum Fun. “Initially they were in about 300 to 360 feet of water, riding the current that has brought a mass of warm water from Baja up here this year.”

With the warm equatorial water comes ocean life native to it, from the bottom of the food chain on up, and that has been good for Southern California anglers, he said.

Tim Sullivan, a marine biologist at the Ocean Institute, explained that ocean upwellings are also an important part of the food chain leading to the abundance of crabs and the fish following them.

“When an upwelling occurs it brings food closer to the surface and feed the plankton that then becomes food for larger drifters like the red crabs,” he said. “Then, in turn, the red crabs become a wonderful food for a variety of birds, fish and marine mammals.”

The crabs are more drifters than they are swimmers and are at the mercy of the waves, Sullivan added. When they come closer to shore—as they have while drifting along with the unseasonably warm current—onshore winds wash them ashore as they are unable to escape the breaking waves.

“Where the warm water goes, that’s where the fish are going to be,” Woolley said. “We are at the mercy of the currents. Typically we see signs such as tuna crabs first appearing in July and August, building in August through September and then we see good fishing into October. This year everything is happening on a more advanced schedule. It’s all about the water temperature.”

Woolley—who has worked aboard the Sum Fun since 1997 and as captain since 2000—added that he and fellow longtime fishermen and boat captains all recall an abundance of tuna crabs foreshadowing El Niño events. The last pronounced El Niño happened in 1997, when the crabs were also seen in abundance, although some were also seen in 2002. Both years had better than usual fishing, he said.

“There have been other signs as well,” Woolley said. “Normally we see good kelp growth during the winter when the water is cooler, somewhere between 55 to 58 degrees is prime for growth. This year the water never stayed in that range for long and the kelp really didn’t grow.”

That, along with the crabs, an early appearance of yellowtail, bluefin tuna sightings starting in May and yellowfin being caught in larger numbers this month are all strong evidence of a coming El Niño, he said. Woolley also said he feels that signs of the cyclical El Niño pattern have been building over the last few years.

The great fishing the crabs have brought has been amazing for Clifton, who grew up as part of a fishing family, making trips out of Dana Point and is now an accomplished angler, sponsored by Accurate Fishing and captain of her own boat the Nauti Girl.

“Ever since last summer there has been year-round yellowtail when it used to be only seasonal,” she said. “We started seeing tuna in May, when we normally don’t see them until July or August.”

Adding to a number of big tuna catches off of the Dana Point coast in the last couple of weeks, Clifton reeled in a 134-pound bluefin tuna on Sunday—the biggest she’s ever taken—fishing approximately 11 miles out of the harbor and only slightly south of the city.

“We were following birds to find schools of tuna,” she said. “I have never seen anything like this around here. The tuna were actually breaking the surface of the water. It looked like a feeding frenzy. We were seeing 100- to 200-pounders above the water. At first we thought we were seeing dolphin.”

When filleting her catches, Clifton makes a point of checking the stomach contents of her fish to see what they’ve been eating and says she often sees the red crabs, but in smaller numbers and mixed with a variety of other small fish.

“It’s crazy,” she said. “All the fish I’ve been catching lately have had stomachs completely full of red crab. I have not filleted a fish with any fin bait in it since January. I’ve seen red crab prior to this but not to this extent. The fishing has been epic.”

WILL WE SOON BE SAYING HOLA TO EL NIÑO?

Sullivan said it is impossible to be 100 percent sure but the signs are indicative of the weather pattern, caused by unusually warm temperatures and known to bring heavy rains to the area.

“There are so many variables and weather is certainly a very important one,” Sullivan said. “Currents such as the warm one the red crabs are riding are often changed by wind. We’ve seen red crab cycles before and they do happen when water gets warm but El Niño patterns are a continuum, not stop-and-start events.”

Sullivan pointed to recent satellite imagery showing that warmer water in the Eastern Pacific off the coast of Central America near the equator as another sign of a building of an El Niño condition, but what the future effects of that are going to be is still speculation, he said.

“NOAA (the National Oceanic and Atmospheric Administration) has been making statements for four or five months calling the warm water an indicator of possible El Niño conditions,” Sullivan said.

On June 11, NOAA released an El Niño Southern Oscillation (ENSO) advisory issued by the Climate Prediction Center and the International Research Institute for Climate and Society that said there is a greater than 90 percent chance that El Niño will continue in the Northern Hemisphere through the fall and around an 85 percent chance it will last through the winter of 2015/2016.

The advisory also predicts below normal hurricane season activity in the Atlantic and above normal activity in the central and eastern Pacific hurricane basins. Impacts of the weather pattern along the coast of California are predicted to be minimal through the summer but then begin increasing through late fall and winter.

As with all forecasting, the only thing to do is to wait and see. While Southern Californians anxiously await the much-needed rains El Niño could bring, there will be plenty of good fishing to pass the time.