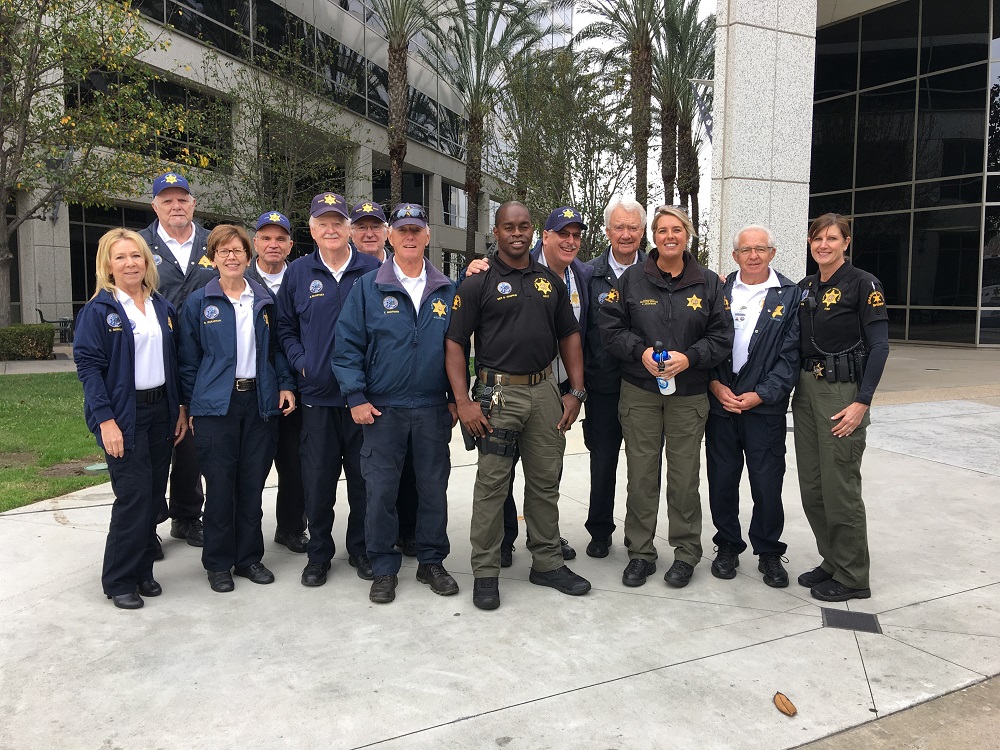 Walking into the Orange County Sheriff’s Department (OCSD) Dana Point Police Services (DPPS) offices at City Hall, one would expect to be greeted by an on-duty, in-uniform deputy or possibly a stressed out plainclothes administrative assistant.


Instead, you may be greeted by Manny Jurado, a 77-year-old resident of Dana Point with a radiant smile and comforting demeanor. Jurado is one of 15 active members of the Volunteers in Police Services, affectionately called VIPS, a program at OCSD Dana Point Police Services. VIPS such as Jurado perform a plethora of tasks to assist patrol deputies and administrative staff.
The VIPS program began in 1991 and has since donated more than 800,000 volunteer hours. In the 2017 fiscal year alone, the VIPS volunteered over 4,600 hours, saving DPPS more than $120,000 dollars.
Jill Jackson is a Crime Prevention Specialist with DPPS and leads the VIPS team. She explained that the current 15 members are an eccentric group of characters, largely comprised of retired but active seniors.
Jackson explained that the volunteers perform any one of a variety of vital tasks including van patrols, bicycle patrols, special event assistance and providing front counter administrative assistance.
When performing van patrols, VIPS patrol the city in a marked Dana Point vehicle serving as an extra set of eyes and ears for Police Services. They look for suspicious activity to report to Sheriff’s Dispatch, patrol and check parks, report any roadway hazards, issue citations for parking violations, check neighborhoods for illegally posted signs and graffiti and assist with traffic control when necessary. Van patrol is also responsible for providing residence checks when requested by a homeowner that will be on vacation or away from their home for an extended period of time.
Bike patrol functions much like van patrol, but focuses primarily on the beaches and the Dana Point Harbor. Our bike VIPS work in teams of two, looking for anything suspicious and issue citations to illegally parked vehicles at our beaches and harbor.
With the number of annual special events Dana Point hosts, VIPS provides help in setting up and providing security at the Sheriff’s Command Post as well as assisting with traffic control, issuing equipment and offering patrol support. Over the past year VIPS have supported OCSD at special events including Doheny Blues Festival, Ohana Fest, DUI Checkpoints, National Night Out, Veterans of Foreign Wars Car Wash, Dana Point Winter Fest, Dana Point Grand Prix, Festival of Whales, Dana Hills High School graduation and Paw Patrol.
The VIP position also works inside the station at DPPS, providing assistance to the public when they come to the front desk and via telephone. They are the first point of contact and are responsible for providing information to citizens and visitors to best of their ability. When necessary, they will request a deputy to take a report, sign off on a ticket or provide more thorough information on a crime that may have occurred. Volunteer statistics, hours and other miscellaneous housekeeping duties are handled from this position.
Manny Jurado, mostly volunteering at the front counter, has been doing the VIPS job since 2010 and says he enjoys being the first face of the Sheriff’s office.
Not only enjoying the invaluable civic duty of enabling OCSD DPPS deputies to carry out their roles, Jurado states that he feels as if he is continuing to actively contribute to his community.
“I want to be relevant,” Jurado said. “As you age, I think most of us want to know we are still contributing. I am still an asset to this community.”
Anyone interested in participating in the VIPS program is encouraged to contact Jill Jackson and DPPS. Dana Point City Hall. 33282 Golden Lantern Ste. 140. 949.770.6011. www.danapoint.org.