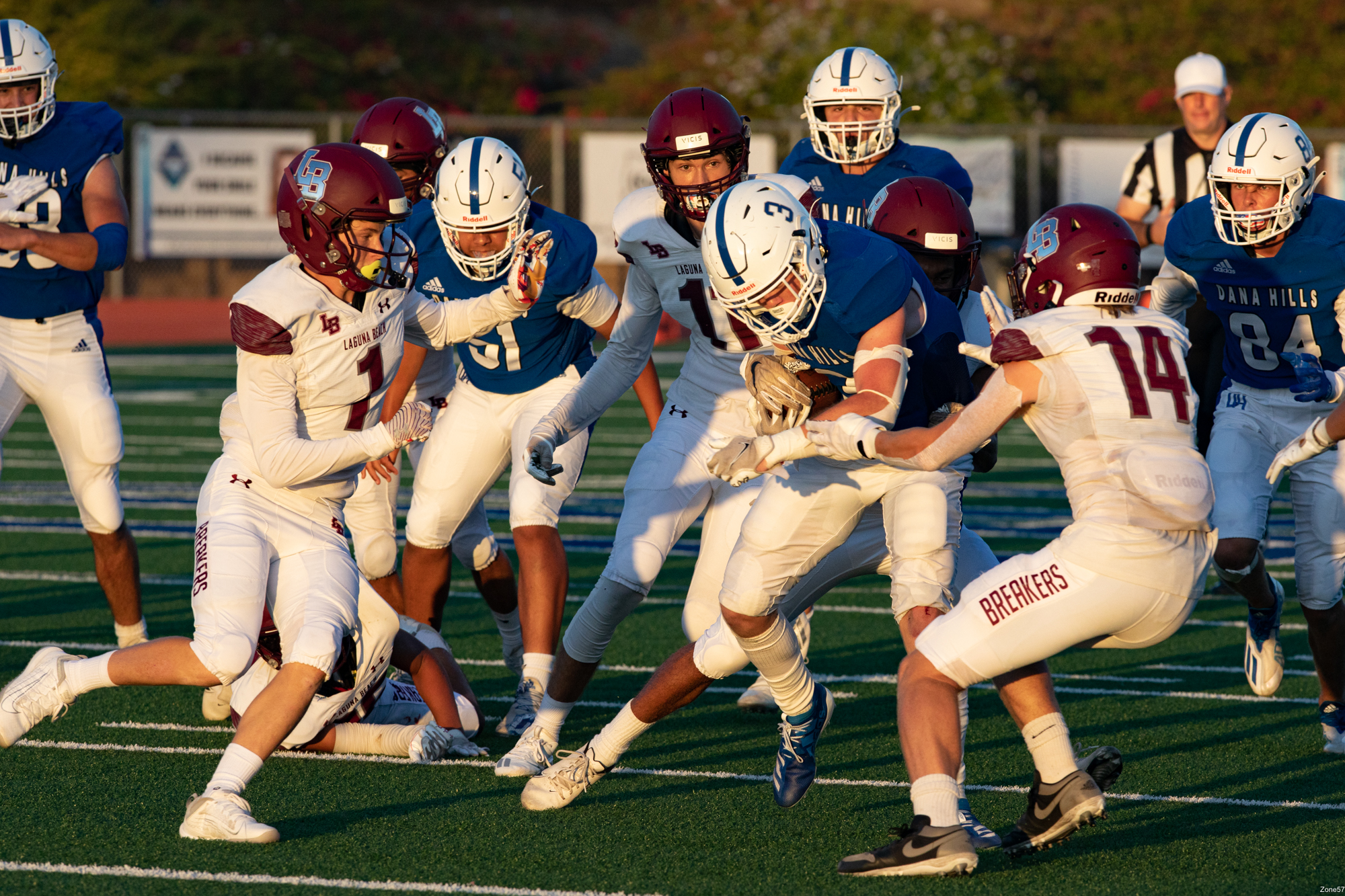 DANA POINT – The Dana Hills football team knew it was going to be an uphill battle this week with around 10 players out due to injuries and COVID-19 protocols, but what really beat the Dolphins on Friday night, Sept. 3, was the downhill-rolling boulder that Trabuco Hills unleashed.

Trabuco Hills senior running back Drew Barrett ran for three touchdowns and 323 yards on 29 carries as the Mustangs wore down and broke through the Dolphins in a win, 28-17, in a nonleague game at Dana Hills High School.

“It’s skill against power,” Dana Hills coach Tony Henney said. “When you’re the skilled guy, you can’t make any mistakes because the power is going to be consistent. (Barrett) is a tough runner, and after the second or third series, they (Trabuco Hills) realized they could impose themselves a bit, and the more we had to tackle him – big, thick kid – it was going to be harder and harder for us.”

The Dolphins had another strong game in the air as senior quarterback Bo Kelly completed 25 of 35 passes for 323 yards with two touchdowns and an interception. Senior receiver Omarjaye Black caught 10 passes for 137 yards and a touchdown, and senior receiver Owen Chambers caught five passes for 92 yards, including a 64-yard touchdown.

TOUCHDOWN: Dana Hills gets into the ballgame. Kelly hits Chambers on a short route, and Chambers beats his defenders on a 64 yard TD. PAT is missed. @bokellyy @OwenCha16498928

Dana Hills was also strong in its pass defense as the Dolphins held junior quarterback Will Burns, who threw three TDs in the Mustangs’ opener over Katella, to 6 of 15 passing for 39 yards, an interception and three sacks.

Ultimately, Dana Hills lost this game in the trenches, as Trabuco Hills (2-0) sacked Kelly four times, almost completely negated the Dolphins’ running attack – Dana Hills ran for 20 yards total – and Barrett broke off a pair of 60-plus yard rushes in the second half that swung the game.

“I told our kids the only thing that could fix their 28 points and their sacks against us is a full year in the weight room for us,” Henney said.

Trabuco Hills led at halftime, 7-6, but Dana Hills went ahead for the first and only time in the game on their opening drive of the half. Senior kicker Kian Afrookhteh knocked in a 25-yard field goal for the lead, 9-7.

Trabuco Hills sets up inside the Dana Hills 10 on this 60 yard run by Barrett. Dana Hills leads 9-7 late in the 3rd quarter. @THHSAthletics pic.twitter.com/m0vXgJxv5b

On the ensuing drive, it almost seemed like Dana Hills had met the challenge up front, but then Barrett burst through the middle of the defense. With Dolphins defenders dangling off his arms, Barrett ran 60 yards to set up Trabuco Hills inside the 10. Barrett ran in the 2-yard score to put the Mustangs back ahead, 14-9.

After Dana Hills was stopped deep and Trabuco Hills fielded a punt at the Dolphins’ 36-yard line, Barrett again set up the Mustangs with a 28-yard run to open the drive. Burns ran in a 5-yard touchdown to extend the lead, 21-9.

Dana Hills didn’t go quietly as Kelly stepped up his game, and Black broke a play. Kelly got the ball to Black on the left side, and Black eluded an ankle tackle to sprint up the sidelines on 37-yard score. The two-point play was converted, and the Dolphins were back within a score, 21-17.

Dana Hills got the defensive play it needed with an interception by Jacob Georgia on Trabuco Hills’ second play of the ensuing drive, but the Dolphins effort was snuffed on a fourth-down attempt at the Mustangs’ 17.

Then Barrett broke Dana Hills’ back with a 68-yard touchdown run to put Trabuco Hills up 11 points, 28-17, with just over three minutes to play.

Despite the icing nature of that play, it was the chase-down effort of the Dana Hills defense and that late surge by the Dolphins offense that encouraged Henney going forward.

“I thought that even when it looked bleak a couple times that we kept fighting,” Henney said. “I think that’s important for the rest of the year, because we’re going to play some good teams and you have to have that in you. I thought that one of the best plays of the night, to me, when they broke for that 70-yard touchdown, our kid ran and tried to make the play. That’s something we’ll highlight just about effort.”

This was Henney’s second game as Dana Hills head coach in his 13th season as a head high school football coach in Southern California. Before the game, Henney recalled Trabuco Hills as a “special place,” as his last stint as an Orange County coach was one season with the Mustangs that resulted in a CIF-SS title in 2014.

Any wistful thoughts of days past with Trabuco Hills (2-0) were wiped away early, as Barrett and the Mustangs got the jump on Dana Hills (1-1) on the opening drive.

Trabuco Hills fed Barrett six times on the opening drive, including a 22-yard run on 4th-and-1 and a 2-yard touchdown run to grab the lead, 7-0.

Midway through the second quarter, Dana Hills got on the scoreboard as Chambers broke a short screen pass 64 yards down the Dolphins’ sideline for the touchdown.