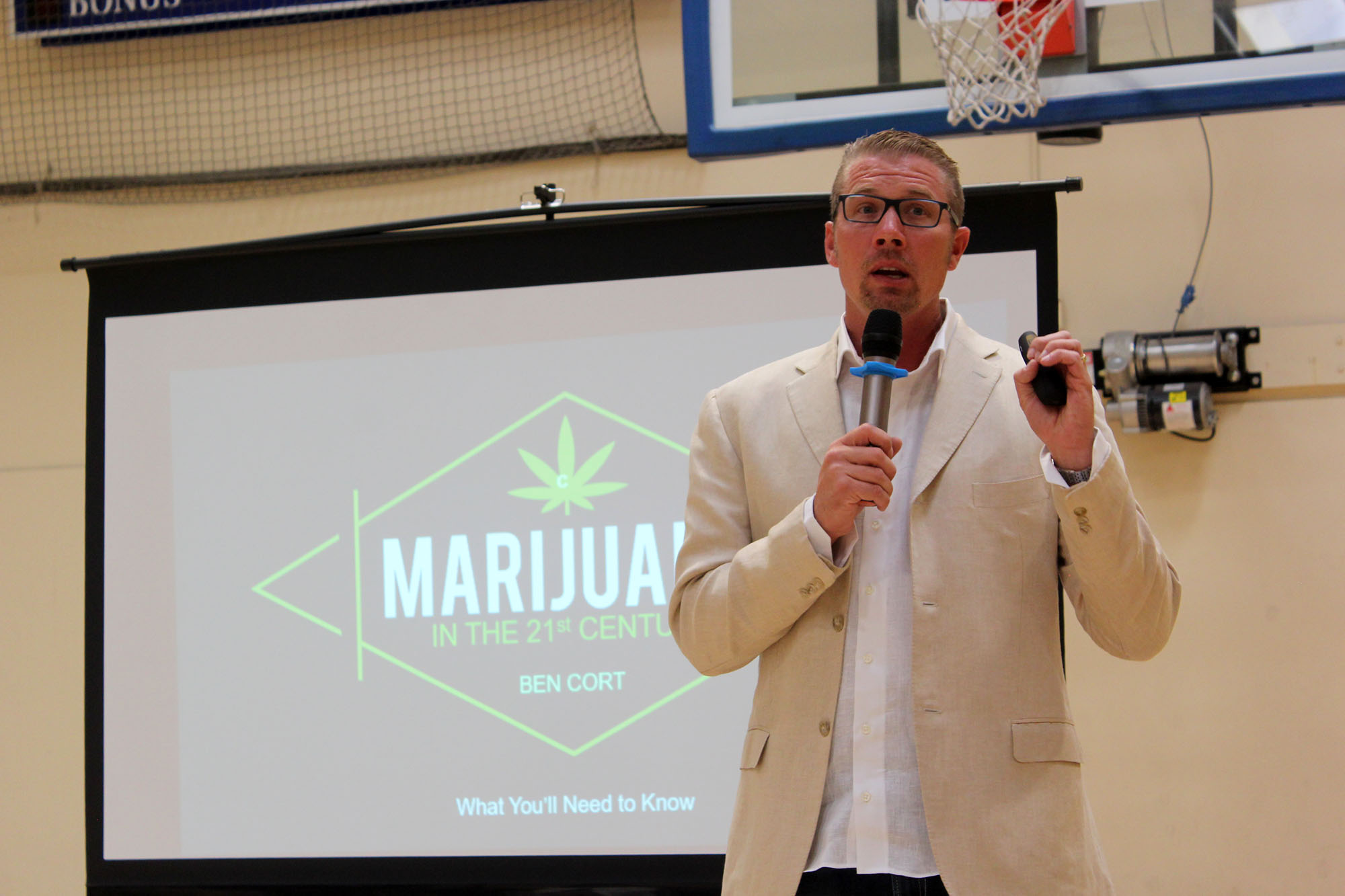 In response to a citizen initiative being circulated that looks to repeal Dana Point’s prohibition against cannabis dispensaries, roughly two dozen people gathered on Monday night, June 20, to attend a town hall discussion where panelists expressed their apprehensions over the impact of marijuana on the community.

The panel was put together by Marci Mednick, a community development specialist and leader of Providence Mission Hospital’s youth substance-use prevention initiative, after she heard about the citizen initiative.

“We wanted to get all the information out to the people of Dana Point and try to make a forum where we can all have a good conversation and really be informed about what we should do in response to that initiative,” Wyatt explained.

Wyatt was on Dana Point City Council when Proposition 64 passed, legalizing recreational marijuana use in California for those 21 and older. At the time, the city discussed how it should react to Prop 64 and decided to take “the cautious approach and continue to prohibit the retail cannabis shops in the city,” Wyatt said.

“This initiative would change that position; that’s the purpose of it,” Wyatt continued. “The city is not here tonight in terms of taking a position on this. … They’re actually not allowed to weigh in on an initiative when it’s in the qualification process.”

The panel did not include representatives of medical or policy-related groups that are in favor of dispensaries for recreational marijuana use.

Following the meeting this week, Mednick explained that she selected Cort and Headrick to bring in a scientific-based argument against the legalization of cannabis retail after working and presenting with the two of them over the past decade.

She selected Chipman as a panelist to share his experience fighting against cannabis retail organizations in San Diego after hearing him present for the Stanford Tobacco and Cannabis Prevention Toolkit.

If voters pass the initiative—pending its placement on the General Election ballot—up to three marijuana dispensaries could operate within a commercial use zone, more than 750 feet away from schools, day care facilities, youth centers, and some parks.

Such shops would also have to be more than 600 feet away from any school or day care facility that is located outside of the city. The City Council would also have the authority to allow for additional cannabis retail permits. One permit would be allowed per permit-holder.

According to the proposed measure, operation hours for dispensaries would be limited to 9 a.m. to 9 p.m. Businesses would be required to maintain security measures and prohibit those under 21 years old from entering the store. Cannabis graphics or products would also be prohibited from being visible from outside the store.

Cort, author of Weed Inc.: The Truth About the Pot Lobby, THC and the Commercial Marijuana Industry, gave a presentation on what he’s experienced in Colorado following the legalization of marijuana in 2012.

“Personally, I actually open my book up with this: I don’t care about casual adult use at all,” Cort said. “Their brains are fully myelinated; do your thing. Don’t drive, don’t let kids see it, whatever. What I care about is youth use, quite a bit, because youth use is where the problems come from.”

Citing a 2016 study from the Substance Abuse and Mental Health Services Administration (SAMHSA), Cort explained that youth’s decreased perception of risk associated with cannabis use leads to an increase in youth use.

Touching on how cannabis potency has changed over the years, Cort added that the potency of THC, the main psychoactive compound found in cannabis, has greatly increased since the 1970s. Humankind has interacted with cannabis plants for millennia, Cort said, but never at the THC levels that the market offers today.

“In 1950, when we began measuring THC, you see what naturally occurs inside of cannabis, which is somewhere between 0.2-0.5% THC,” Cort said. “We have found mummified examples of cannabis inside of tombs in ancient Asia and Africa, which should tell you how important this plant has been to us forever.”

Cort explained that the potency of THC in cannabis up until it was originally criminalized was doing very little harm to the human brain and body. He added that as THC potency has increased, so has the rate of cannabis dependency.

“Now, as we’ve seen the potency of THC increase—more importantly, the gap between THC and CBD increase—we started to see more and more issues associated with this,” Cort said. “I want you to pay very close attention to this, because this is the nature of commercialized sales of anything, certainly anything with addictive potential.”

Dr. Headrick spoke from his experience as a family physician and addiction specialist at the Headrick Medical Center and the damage that cannabis use has caused for some of his patients. While there have been studies that show promising medical treatment with marijuana, Headrick emphasized that bringing dispensaries into Dana Point is moving too fast.

Headrick added that there’s some research being conducted on cannabis use in treating PTSD, osteoporosis, traumatic brain injury, stroke, heart attack, cancer and seizures, but “it needs a lot more research.”

Headrick added that despite the potential, there’s a well-documented downside associated with marijuana use.

Dr. Headrick’s concern with allowing dispensaries to operate in Dana Point is the risk cannabis poses to kids’ developing brains. His dream is that kids going through high school never try an alcoholic beverage or a drug in all four years, hoping to stop kids from using before they ever start.

“Good discoveries are going to be made from CBD and low-dose THC, but we need to go slow, and I really think a dispensary is going backwards, especially for my dream,” Headrick said.

The third panelist, Chipman, is a small business owner and community activist with San Diegans for Safe Neighborhoods. The group advocates for assisting local law enforcement and closing cannabis retailers in San Diego.

“We know everything we need to know about marijuana,” Chipman said. “We need to spread that to everyone we know. But a couple in Compton kept marijuana shops out of Compton; it would only take this little crowd here to keep marijuana out of Dana Point, going door to door, getting literature, telling your neighbors.”

Chipman added that 75% of cities and counties in California do not allow cannabis retail in their cities. Dana Point resident Michele Leonhard noted that the neighboring City of Mission Viejo voted against legalizing cannabis sales during its May 24 meeting.

“There are cities and municipalities all over the state that have voted not to have this come into their city,” Leonhart said. “So, I do not understand why this beautiful beach community that is all about health and living well would bring something like this into the city.”

“California voters clearly agreed with that, as do the vast majority of Americans across the country,” Smith continued.

Cannabis is already being consumed in Dana Point, Smith said, regardless of the ballot measure.

“The question is whether or not those who are consuming it are buying it from a business that’s local to the community or traveling across the city limits to purchase it elsewhere, where they’re paying taxes to another community,” Smith said.

Smith added that the National Cannabis Industry Association has seen this occur across the state of California, where cities lose tax revenue to neighboring cities that allow for cannabis retail. Additionally, there’s danger in people getting their cannabis from the “underground market,” in terms of products not being properly tested or labeled, Smith said.

During the panel, Chipman argued that anyone over 18 with a medicinal marijuana card can sell the drug illicitly on the street and in schools.

Smith argued that underground sales of cannabis are happening because of lack of access to legal cannabis, adding that people prefer to purchase cannabis through a licensed facility. He further noted that it’s already a crime to deal marijuana to minors, and that passing the proposed ballot initiative wouldn’t change that.

“This initiative doesn’t make that legal,” Smith said. “It’s against the law under the current law and under any future law. … That shouldn’t happen. If somebody does that, they should be prosecuted. That’s not the intent of this law.”

The petition has until Aug. 12 to gather signatures from 10% of registered voters and receive verification by the Orange County Registrar of Voters to qualify for the upcoming General Election.