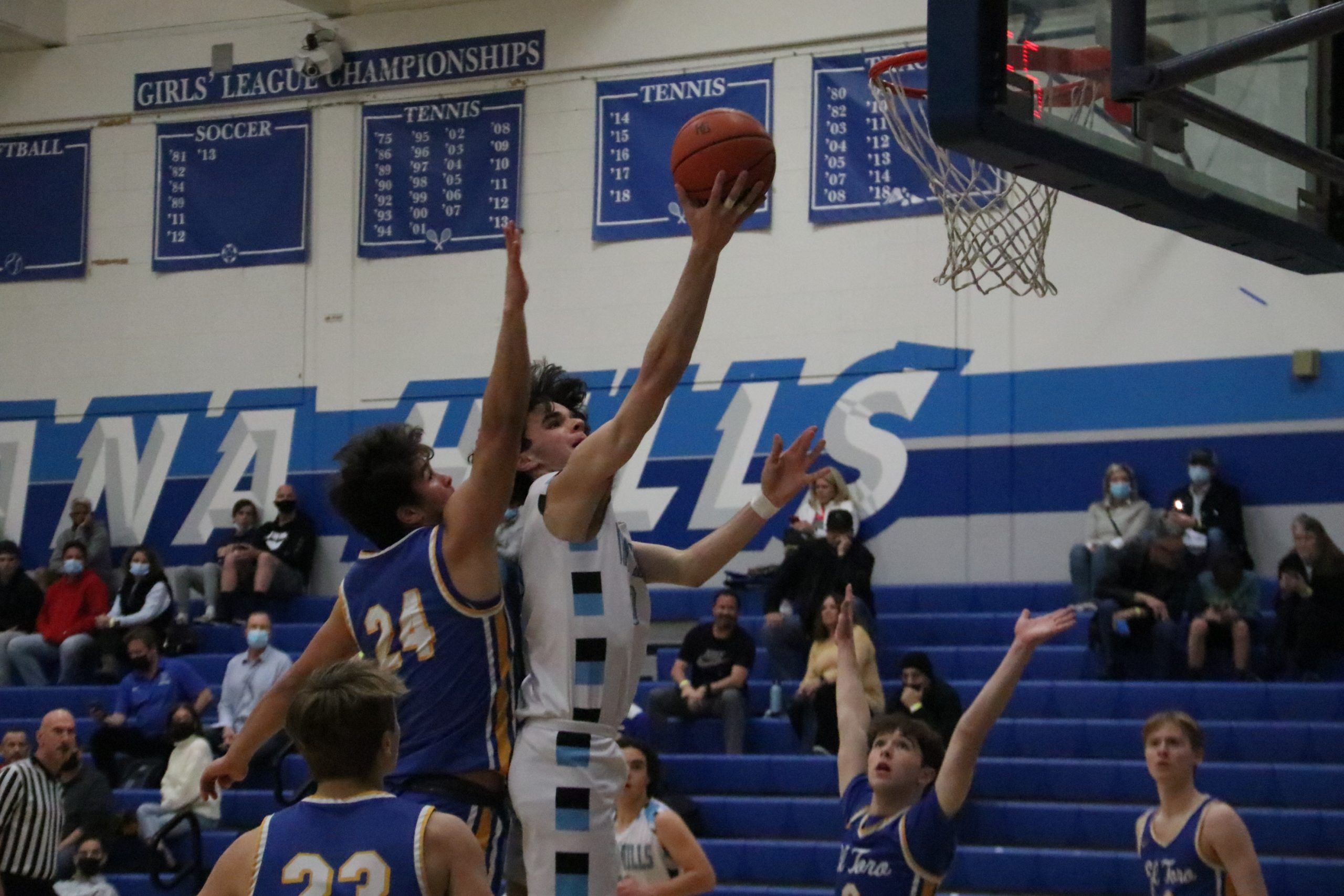 The Dana Hills boys basketball team has hit a rut in the most crucial portion of its Sea View League season.

While the Dolphins’ playoff fate might still be safe due to their No. 1 ranking in CIF-SS Division 3A, a potential playoff berth could be in the hands of a CIF committee deciding at-large selections, as an automatic spot out of league might have slipped away for Dana Hills.

With an uncharacteristic shooting night by Dana Hills, El Toro capitalized on late opportunities and knocked down free throws to upset the Dolphins, 45-38, on Wednesday, Jan. 26, on senior night at Dana Hills High School.

“It’s one of those things,” Dana Hills coach Tom Desiano said. “We’re such a perimeter-oriented team, and if our shots don’t fall, we’re going to have to defend. It was a low-scoring game, and we just didn’t execute the way we needed to, and (El Toro) did. I give them credit. They came out and played aggressive and smart, and they deserve the win.”

It was the third loss in a row—all at home—for Dana Hills (15-7, 1-3), and represented the Dolphins’ lowest offensive output of the season with only 38 points. The previous low was 39 points in a tournament win in December.

Dana Hills opened league play with a 67-48 win at El Toro, but the Dolphins followed up with a pair of losses to second-place Aliso Niguel, 71-65, and league-leading San Juan Hills, 69-48. A win over last-place El Toro on Wednesday would have tied Dana Hills with Aliso Niguel for the league’s second and final playoff spot heading into the Dolphins’ trip to Aliso Niguel on Friday, Jan. 28.

Instead, Dana Hills has to hope to win its final two games—Friday and then next Thursday, Feb. 3, at San Juan Hills (ranked No. 1 in Division 2A)—for a chance at a second-place tie with Aliso Niguel, if El Toro can upset the Wolverines next Thursday. Otherwise, the Dolphins will have to lean on their overall record and ranking for an at-large playoff selection.

“It’s just next game up. That’s all we can do,” Desiano said. “At that point, it’s just up to the CIF. Right now, it’s going to be tough for us to get to second place, and at that point, we just have to hope our resume is good enough to get us in. Only thing we can do is worry about Aliso on Friday and see what happens.”

Dana Hills had a similar pattern in league play last season. The Dolphins also opened up with a win over El Toro and followed with losses to Aliso Niguel, San Juan Hills and El Toro in that order. Dana Hills finished 1-5 in league last season and did not make the playoffs with a 2-9 overall record.

The Dolphins last made the playoffs in 2020 and lost in the first round of Division 3AA.