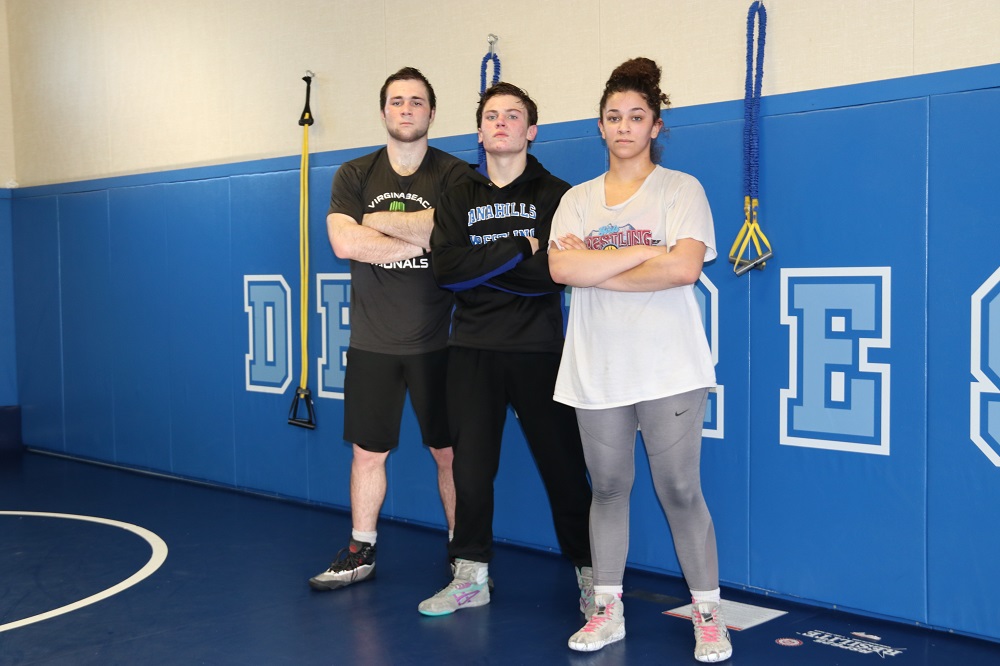 The championship season of the wrestling schedule is here, and three Dana Hills seniors are aiming right for the top of the podium.

A season of dual meets and widespread weekly tournaments are out of the way, and Josh Harkey, Gavin Walker and Layla Donahoe are ready to show their individual might starting in the Coast View Conference tournament on Saturday, Jan. 25, at Aliso Niguel High School.

Each of those three showcase the trademark of a Dolphin wrestler: toughness.

“What (Coach Reza) Abedi started when he came over here so many years ago (1994) was just making tough wrestlers,” Dana Hills assistant coach Eric Romm said. “They’re tough kids and they don’t care if the opponent is better, ranked higher, seeded higher than them. They just want to wrestle a tough match.”

At 195 pounds, the Cal Poly-bound Harkey, ranked No. 3 in the state, might have the most expectations placed on him.

“My goal has been to be a state champion since last year after state,” Harkey said. “I realized it was within reach, it was possible to do. In the offseason, I went to nationals. I really started grinding, working hard and trying to perfect my skills and refine what I’m really good at.”

Last season, Harkey won a CIF-SS championship and finished third at Masters and in the top 12 at State. This season, Harkey opened the season ranked No. 5 in the state in his weight class and fought up to the top ranking. He’s dropped a couple spots to No. 3, but nonetheless, the high ranking is validating for Harkey.

“I remember all of my junior year that I felt under-ranked,” Harkey said, “but then this year, they’ve finally started noticing I’m the real deal.”

Harkey, who is strong on the underhook and can move and throw his opponents with ease, should repeat as conference champion this weekend and move on to the CIF-SS Coastal Division championships on Feb. 14-15 with Masters on Feb. 21-22 and State on Feb. 28-29.

Walker, ranked No. 21 in the state at 145 pounds, sees this championship season as a chance for redemption after an injury-plagued junior season.

“Last year was a complete failure to me,” Walker said. “I didn’t fulfill all the expectations I had. That changed my complete mentality. It made me realize how little time I have left, and what I have to do, how hard I have to push myself.”

Walker finished second in the conference last season and sixth at CIF-SS. Walker will again compete for the conference title individually, but he wants to try and bring up the whole team’s efforts beginning this weekend.

“We went 0-4 in league duals,” Walker said. “It wasn’t good. It was all a learning experience. This is where we have to peak. I want to go to State with my buddies. I don’t want it to just be me, Josh and Layla. I want to see the juniors there. I want them to do what I couldn’t do.”

Donahoe put in a lot of work over the offseason to prepare herself for this point.

Donahoe finished second at 189 pounds at the CIF-SS Southern Regional last season and seventh at the CIF-SS Finals to qualify for State. Donahoe went 0-2 at State, but she said that it was “because of a mistake.”

For this season, Donahoe dropped down to the 160-pound weight class, gained more muscle mass and sometimes practiced twice a day. Donahoe is ranked No. 6 in the CIF-SS.

“I was hoping to do a little bit better in some of my tournaments,” Donahoe said, “but overall, I’m proud of myself.”

Donahoe, one of only a handful of girls in the program, benefits from wrestling alongside, and sometimes with, the boys and said she can gain strength by simply wrestling against them.

“Layla always tells me if we have a girls practice, I’m not going,” Romm said. “I want to practice with the boys. She knows how tough it is and how to get better. She’s the kind of girl that fights for herself and advocates for herself every day.”

In wrestling, the hard work shows. Skill, technique and strength go a long way, but at the top levels when the best wrestle the best, toughness wins out.

The Dolphins have that in spades.

Zach Cavanagh
Zach Cavanagh is the sports editor for Picket Fence Media. Zach is a California Journalism Award winner and has covered sports in Orange County since 2013. Follow him on Twitter and Instagram @ZachCav and follow our sports coverage on Twitter @SouthOCSports. Email Zach at zcavanagh@picketfencemedia.com.