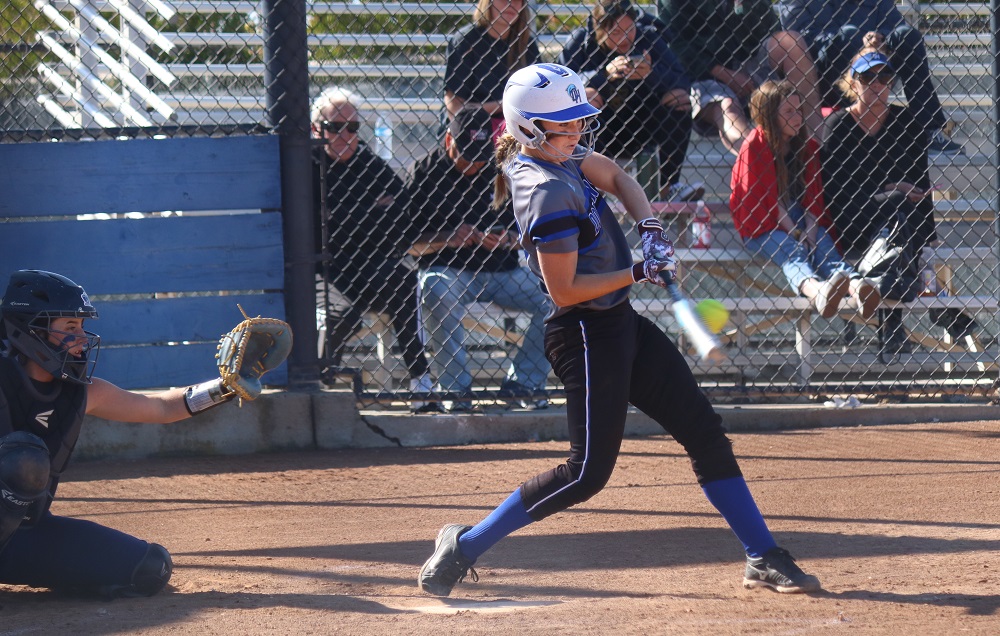 From the Top: Top of the Dana Hills Softball Lineup has Dolphins Contending in League

It would have been easy to expect less from the Dana Hills softball team this season.

The Dolphins graduated their top six RBI leaders from last season and were moving up to the tougher South Coast League. No more years of breezing through the Sea View League as its pacesetter.

With youth coming to the table, Dana Hills figured it would need time to sort out what it has and who it is. Through 15 games, the progress report is promising: the Dolphins are strong and in the thick of it in the South Coast League.

“We tempered our expectations for this group,” Dana Hills coach Brandon Cosenza said. “Let’s play loose, let’s have fun, let’s see what happens. These kids have so much heart. They come to practice every day with an awesome energy.”

Dana Hills (11-4-1, 2-1) is powered by the top of the batting order with contributions from every grade level. The Dolphins’ top three run-scorers and top four hits leaders are the first three and four spots in the order, respectively.

Junior Jackie Stillwell hits lead-off and is the co-leader in hits with 17 and is third in runs with 14. Batting second is freshman Kaci Palmer, who is tied with Stillwell at 17 hits and leads the teams in runs with 16. At the No. 3 spot, senior Terra Goetz is second with 16 hits and 15 runs scored and leads with six doubles. Batting cleanup, sophomore Piper Tago is third in hits and the team leader with 17 RBI and four home runs.

“They play together as a team,” Cosenza said. “We don’t really have any superstars on this team. They love competing and play really well for each other.”

Junior Chloe DePierro is second in RBI with nine, and Palmer, senior Sam Montero and junior Margo Hopper are tied for third with seven RBI.

Stillwell also produces the speed needed at the lead-off spot with a team-high 10 stolen bases, doubling the total of her next-closest teammates: DePierro and Palmer, both with five.

While a big contributor on offense at the top, Goetz also returned as the team’s top pitcher from a year ago. In 57 innings over 12 appearances, Goetz is limiting opponents with a 1.35 ERA and a .194 batting average.

All of this has put Dana Hills in the middle of a very competitive South Coast League.

Aliso Niguel is the leader at 3-0, and Dana Hills right behind at 2-1. San Juan Hills and Mission Viejo are tied for fourth at 2-2, and Laguna Hills brings up the rear at 0-4.

With 10 days off between games for spring break, the Dolphins need to be sharp before hosting Mission Viejo on Tuesday, April 9. The Diablos beat Dana Hills, 7-5, on March 21.

Dana Hills plays at Aliso Niguel on April 16 and hosts the Wolverines on April 18. The Dolphins wrap up the season at San Juan Hills on April 22.