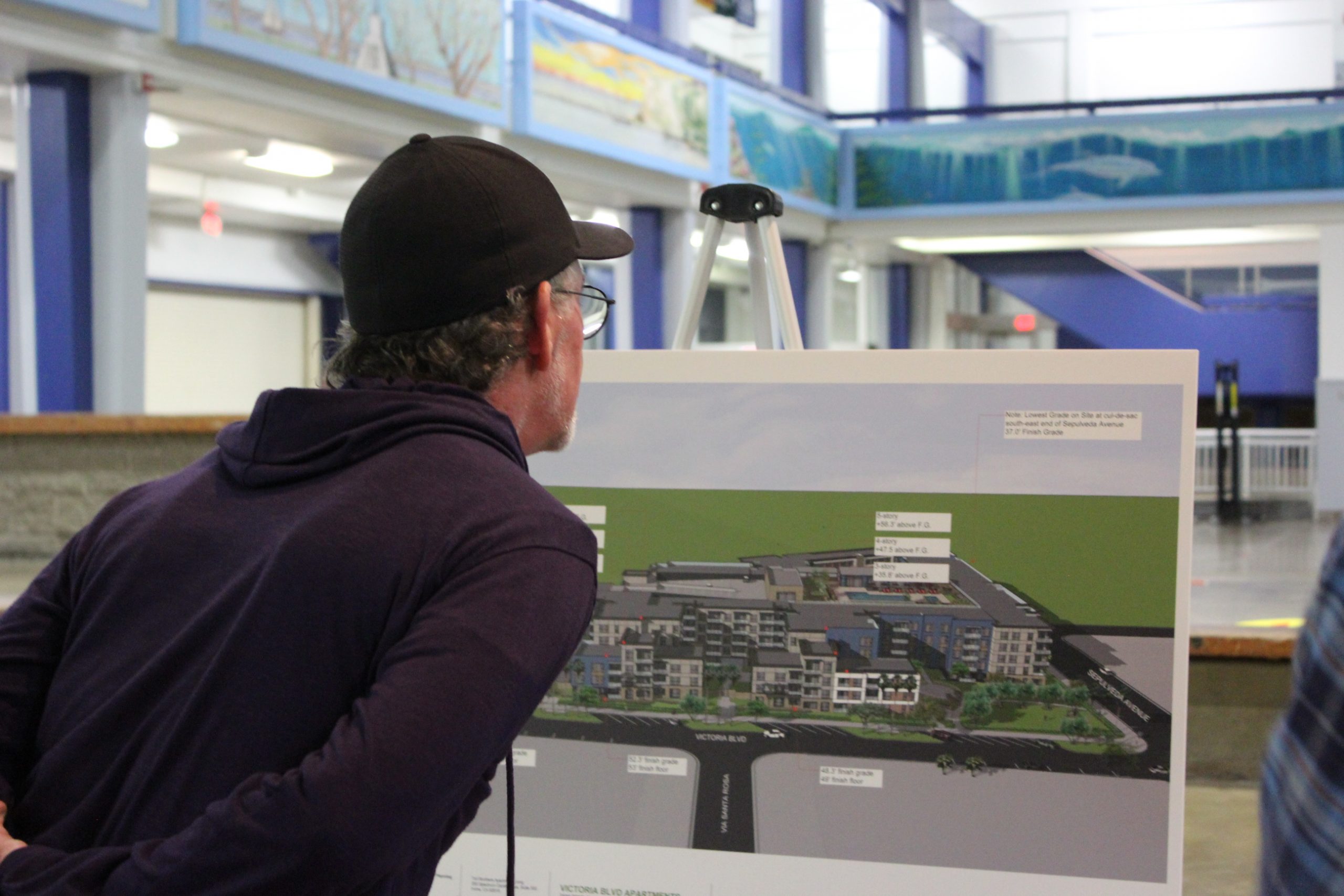 As part of a public outreach effort on Nov. 16, the housing construction company Toll Brothers shared renderings for its proposed project—a high-end, “park and stay” style apartment complex—and gathered input from the community.

The Toll Brothers’ project at the school district bus yard off Victoria Boulevard and Sepulveda Avenue, below the Pacific Coast Highway overpass, aims to provide a more beneficial use to the community than the site’s current use.

With the proposed project, Toll Brothers is looking to provide increased community benefits through the addition of a park, dog park and added street parking. Through an agreement with the district, the developer intends to provide $40 million toward upgrades at Dana Hills High School.

“Back in 2018, the school district feels that this property has run its course as far as being of use in its current state for them and they decide that they want to try to get a developer to come and provide some improvements, on a ground lease,” McCann said. “The property is going to continue to belong to the school district, but on a long-term ground lease.”

“One of the nice things that comes out of it is there were some leaking, underground storage tanks creating some environmental issues and when our project started to move forward, the school district decided it was time to clean them up,” McCann continued.

By January 2019, CUSD and Toll Brothers entered into an agreement, which allowed the housing developer to begin an entitlements process for the Victoria Boulevard Apartments.

The maximum height of the apartment complex would be five stories, with some portions of the building featuring three-, four- and five-story stacks.

In response to public input from the previous workshops, Toll Brothers modified the design so that there is a gradient, with three-story apartments at the front side of the complex facing Victoria, with four- and five-story apartments behind.

In a resolution enabling the housing construction company to move forward with the entitlements process, the Dana Point City Council included directives to ensure the project benefits the community as a whole.

Within the directives, the council restricted the complex to a maximum of 365 units with a maximum height of 65 feet. An additional 10 feet is allowed for roof-mounted equipment and another 10 feet for recreational structures.

The project plans show an amenities space that reaches the 65-feet maximum, but is “well, well below” the height limit, McCann explained.

Toll Brothers also plans to provide the nearby churches with up to 50 parking spaces on Sundays, as they currently use the bus yard as overflow parking.

“Parking ultimately is not really going to be an issue here,” McCann said. “Traffic, we were concerned about that as well. We’ve got people coming in to spend a lot of money, they expect to have a good lifestyle, they expect to be able to get in and out of this place, feeling like they’re not going to war every day.”

“So, a traffic impact analysis was initiated,” McCann continued. “Effectively, what they came to was really no meaningful impacts to any intersections but for one.”

That analysis concluded that the apartment complex’s projected impact on traffic is less than the city’s thresholds of significance and would have minimal impact on Congestion Management Agencies’ monitored intersections and State Highway system intersections.

McCann explained that by 2045, the city expects traffic concerns with the 5 Freeway onramp from Camino Capistrano at Stonehill Drive, will become an issue, whether the project moves forward or not.

“Effectively, we are not making the traffic any worse than it could otherwise be with this site,” McCann said. “I know people find that hard to believe. Apartments have a very even flow of traffic.”

To mitigate traffic concerns, Toll Brothers plans to contribute funds to the neighboring City of San Juan Capistrano to address challenges at the intersection.

Toll Brothers anticipates that the city’s eucalyptus trees would mostly hide the apartment complex from view from the freeway overpass.

“This project will not obstruct views, not be an eyesore for the community and rather sit in this hole,” McCann said.

On the corner of Sepulveda and Victoria, the apartment complex would feature a half-acre park with amenities open to the public. The project would also feature a dog park for the Dana Point community.

Though discussions are ongoing, the housing construction company also plans to set aside approximately $6 million for public and capital improvements in Doheny Village.

During the public workshop, community members voiced concerns about the project’s impact on traffic, parking and safety, as well as the noise impact from construction. Other residents commented that the project’s funds committed to Dana Hills High are sorely needed.

“My main concern with the density of this project would be traffic flow,” Dana Point resident Rhonda Dunlevie, said.

Dunlevie noted that with summer music events like the Ohana Festival, traffic in the area is already greatly impacted. She further voiced concerns over how the city or developers intend to mitigate traffic flow issues.

“You want single-family residences, you want two-story condos, I could entertain that,” Neumeyer said. “I’d rather see it stay a bus yard.”

Katie Anderson, a Dolphin Foundation member and president of the Parent Teacher Student Association at DHHS, commented that the high school is in desperate need of funds for repairs.

“Speaking as a resident, I do believe that this opportunity is a win-win for both our community and our high school,” Anderson said.

“We are—here at Dana Hills High School, to speak from that perspective—in desperate need of upgrades to this 50-year-old building,” Anderson continued. “Our kids deserve a lot better.”

“Change happens,” Michele Ploessel-Campbell said. “This is a change though that will ultimately benefit the youth in our community who come through this school. And that matters.”

Ploessel-Campbell noted that the funds are just a start and not “the full amount of money we need to rebuild Dana Hills into a modern school.”

“It’s shameful that our students are in classrooms that are boiling hot in the summer, that do not have equal access to technology that people just up the road have,” Ploessel-Campbell continued.

Ploessel-Campbell, commenting on the school district’s previously failed bond measures, noted that this project brings funds to the school without costing taxpayers.

Back in June, the CUSD Board of Trustees reached an impasse over whether to place another bond measure to fund facility upgrades at the high school on this year’s General Election ballot.

Before going to the Dana Point City Council, the apartment project will face numerous hurdles including the California Coastal Commission’s consideration for a local coastal plan amendment and coastal development permit.

The complex would also require a site development permit, tentative parcel map, certification of a project-level environmental impact report and subsequent grading and building permits, as well as a General Plan amendment, zone change and adoption of the Victoria Boulevard Specific Plan.

“We’re definitely getting closer and closer to having something we think we could bring to a Planning Commission, but it still has a ways to go,” McCann said.

The Victoria Boulevard Apartments was placed on the Dana Point City Council’s agenda for Nov. 15, giving the elected officials a chance to speak on the project in a public setting as the workshop fell on the same day as a Coastal Commission meeting—when the city’s vacation rental program and a pilot program to address the erosion of Capistrano Beach were approved.

City staff noted that the entire City Council would likely not be able to attend the public workshop, with Mayor Joe Muller emphasizing the importance of gathering the council’s input.

During the meeting, City Council discussed the zoning process for the apartment complex. Muller commented that when the city looks at its zoning or building codes, it does not look at it in terms of specific projects or plans.

“I think when we talk about Doheny Village and what’s going to happen down there, we need to look at the village holistically, what do we want to see and what should the zoning look like,” said Muller, whose term on the dais is set to end early December.

“And it’s very difficult to do that when you have a very specific project going on and you’re trying to figure out an area of the village that has not been up-zoned,” Muller continued.

Muller noted that when discussing the Doheny Village zoning, it’s important that the council is “not discussing a project that has not been approved.”

Toll Brothers looks to release a draft environmental impact report for public review by early January 2023. After the report, which will include assessments on traffic, noise and air quality, is published, the public will have 45 days to submit comments.

By Spring 2023, Toll Brothers plans to have the project in front of the Dana Point Planning Commission and City Council for public hearings.