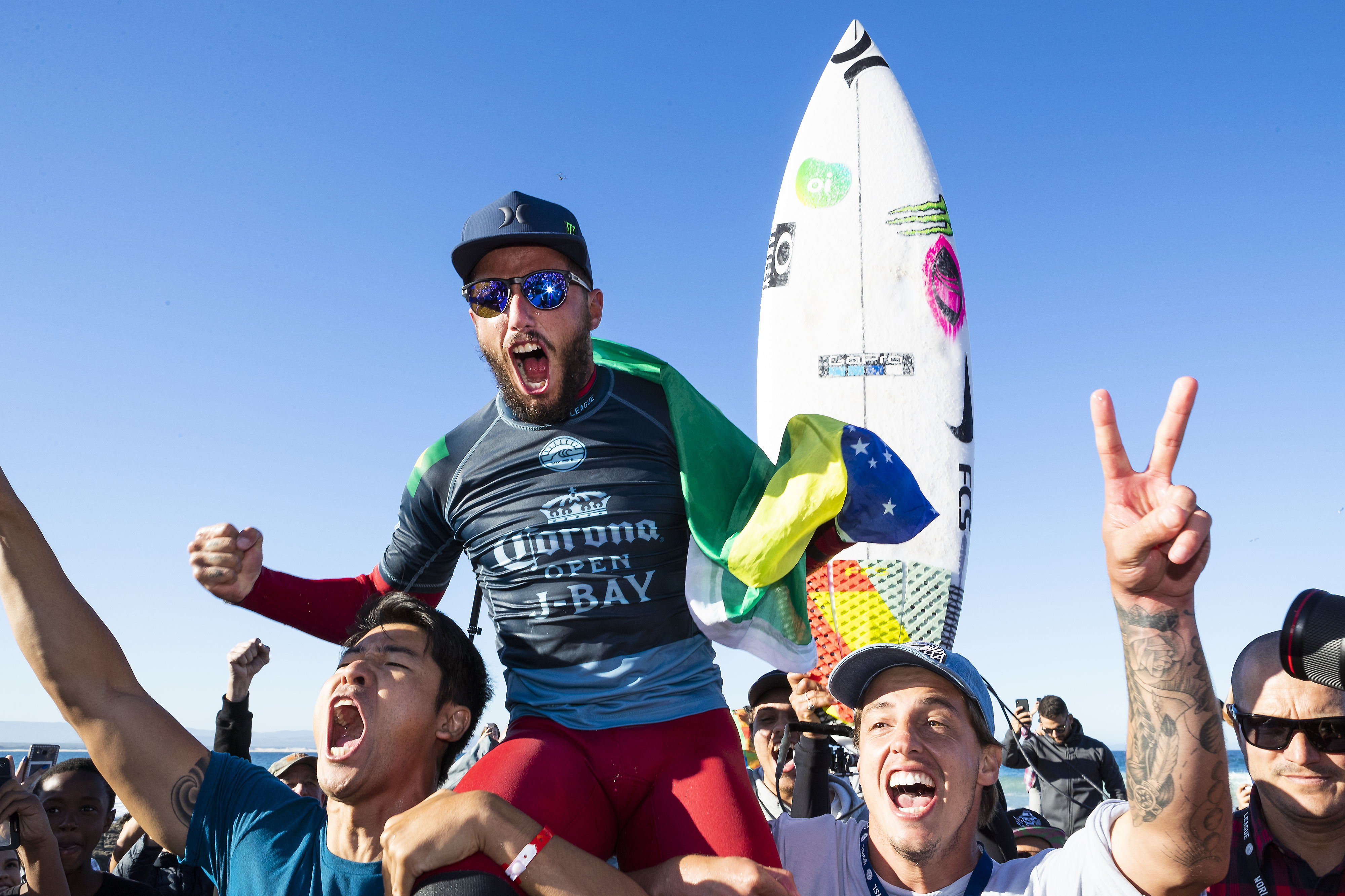 Not to belabor the point, but it really is too bad the Hurley Pro won’t be coming to Lower Trestles this September.

San Clemente transplant Filipe Toledo just won the WSL Corona Open J-Bay in blistering fashion and now leads the world title race. It would have been fun to see what he could do with a little home-field advantage. Just the same, Toledo seems to possess that rare ability to surf lights-out no matter where in the world he is. Case in point, this was Toledo’s second win at the famed South African right point.

“Back-to-back wins is always something that I’ve dreamed of,” said Toledo from the winner’s podium. “It could not be more special here in J-Bay after last year, and this year we’ve had such good waves again. Thanks, God. Thanks, Jesus. Thank you to my family and everyone supporting me. I feel so blessed right now.”

“When it is finals day, it is just something that clicks,” Toledo said. “It is now or never, and I put it all on the line. That is always my strategy, ‘Go big or go home.’ It is easy like that and I went big. Finals is one of those heats where it is first or second, there are no losers, so I just go really big and put all my work on the wave. That is why I train. That is why I’ve been really focused.”

That’s not to say it was all a walk in the park for Toledo. Meeting rookie Wade Carmichael in the final, he had his work cut out for him. The two met earlier in the year in the final of the Oi Rio Pro.

“Repeating the final with Wade Carmichael, who has been really solid the whole event and surfing really well, it was a pleasure to surf against him. He took down some really big names,” Toledo said.

Carmichael took out Jordy Smith, another San Clemente transplant, in the semifinals and Santa Barbara’s Conner Coffin in the quarterfinals. The result gives him a clear advantage over San Clemente’s Griffin Colapinto in the race for the 2018 Rookie of the Year award.

“I had no expectations coming into this year,” Carmichael said. “I am really happy. I just want to keep improving my surfing. I’m having that much fun, and I want to keep going. I am enjoying every minute of this. I want to thank everyone.”

As far as the race for the 2018 WSL World Title goes, Toledo finds himself in a commanding position with two event wins this season. He’s sitting out front of the pack by about 4,000 points at the moment. Behind him is Australia’s Julian Wilson, who appears to be his biggest rival for the title. After that, Brazil’s Gabriel Medina and Italo Ferreira are in the mix, if they can get some momentum during the back half of the season. Medina is especially dangerous after the tour turns the corner. With his third-place finish at J-Bay, Smith has cracked the top five.

As far as local talent goes, Colapinto made it to round four, but got tangled up with an interference call. He finished with a ninth-place result and sits at number 10 in the world. Kolohe Andino got tripped up in round three and Pat Gudauskas unfortunately bowed out in round two.

For the first time in 20 years, the women of the WSL Championship Tour also got a crack at J-Bay. As of press time, the early rounds of the contest had run but the event has since been put on hold due to lack of swell. When it does resume this week, Ventura’s Lakey Peterson will be looking to extend her ratings lead over seven-time world champion Stephanie Gilmore. Peterson is contending to be California’s first world tour champion since Tom Curren back in 1990.

Grom of the Week: Luke Wyler