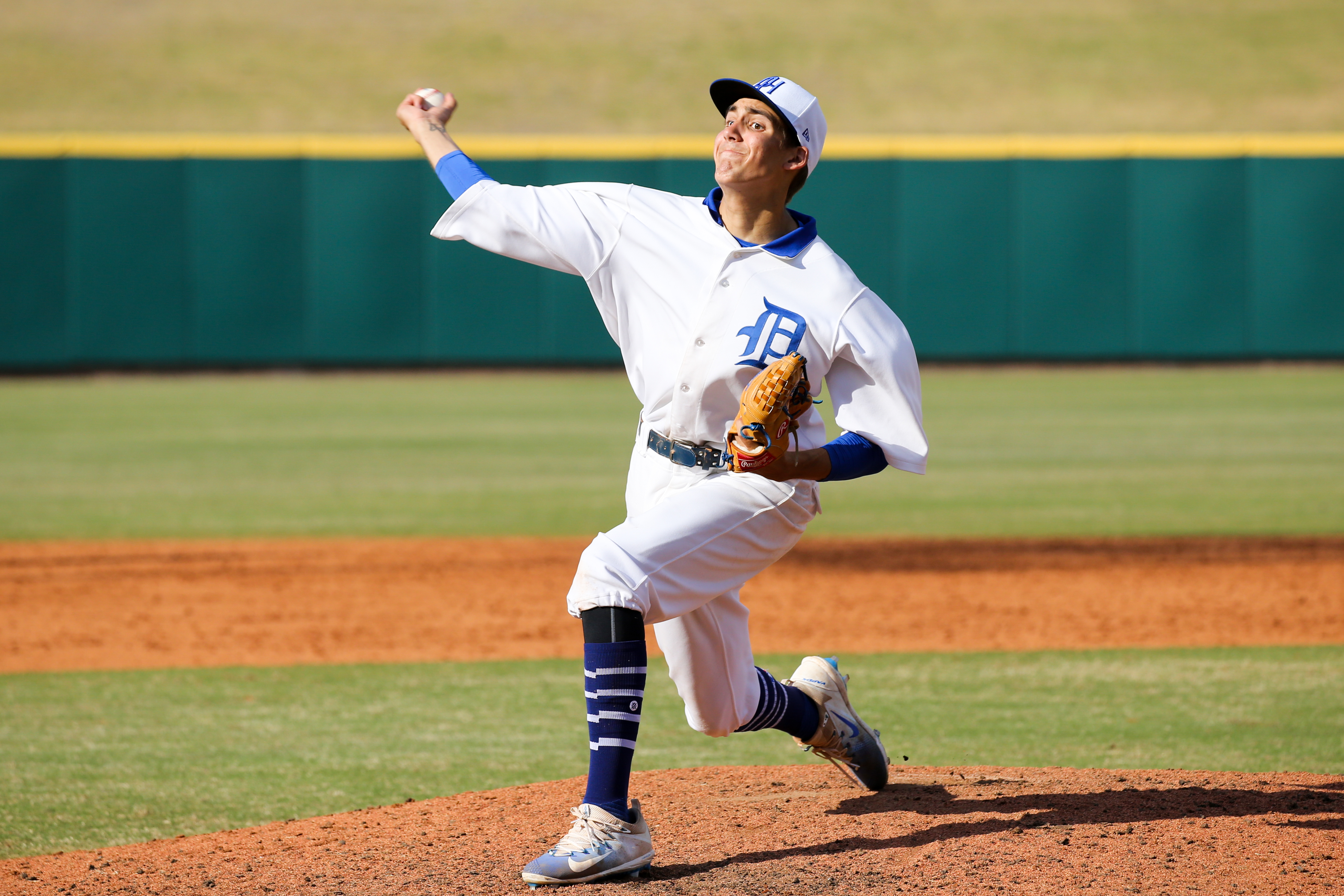 Watching Hans Crouse pitch is like to watching a symphony orchestra play out on a baseball diamond.

First, the conductor grabs the attention of the crowd.

Before every outing, Crouse, a 6-foot-5-inch right-hander, stands behind the mound, takes off his hat, bows his head and points upward as a sign of his faith.

As he settles into his windup, which can fluctuate between a traditional delivery, a shimmy-shake offering or even a quick-pitch, the dozens of big league scouts in attendance raise their radar guns in unison behind home plate, signaling to the audience that they are about to witness something special.

Then the music starts.

A devastating 96 mph fastball is the opening note, accompanied by the “ooh’s” and “ahh’s” of the fans in attendance at Dana Hills High School, where Crouse spent the last three years baffling varsity players.

His sharp, downward breaking curveball offers a change in tempo.

His body language, whether he’s laboring through an at-bat or cruising to a one-hit shutout, delivers the excitement of a percussion section. His delivery, which comes across his body, is violent but effective. His fist pumps are on the level of Tiger Woods in his prime.

He’s also not afraid to let out a chorus of roars when he ends a pressure-packed inning.

“I’m always going to be competitive. I don’t think it’s something I can tame because it’s who I am out there on the mound,” Crouse said. “After the game I’m fine with being your friend, but during the game I’m not trying to be your friend. My mentality is to attack every hitter and get outs for my team.”

All parts of Crouse’s game add up to a highly-touted prospect that many are projecting to be a first-round pick in Major League Baseball’s amateur draft on June 12.

Baseball America has Crouse ranked 37th overall in its 2017 draft rankings, and www.mlb.com ranked him the No. 8 high school prospect in March.

The journey to the draft has been a fulfilling one for Crouse, who went from being the skinny freshman to dominating hitters on the world stage in the span of three years.

Crouse broke through onto the Dolphins team as a sophomore, pitching behind his older brother, Marrick. Marrick, who now pitches for USC, was the team’s top pitcher and Hans was No. 2. The desire to get to his brother’s level, coupled with a timely growth spurt that added 15 pounds to his frame, vaulted Crouse into another stratosphere.

He hit 90 mph on the radar gun as a sophomore. The following summer he hit 95 mph.

As a junior, Crouse pitched 73 innings, amassing a 1.15 ERA to go along with 96 strikeouts. He pitched four complete games, threw a no-hitter and won a wild-card playoff game in the CIF-SS Division 1 Championships. In October of 2016, Crouse helped the USA Baseball 18U National Team capture gold at the COPABE Pan American Championships in Mexico. He was the winning pitcher in the gold-medal game against Cuba, where he allowed no runs and struck out 11 in seven innings.

He also developed a slider that summer, which he used to great effect during his stellar senior campaign.

Scouts and large crowds were a regular occurrence at Dolphin Stadium whenever Crouse took the mound this season. The pressure could have gotten him off his game but Crouse never wavered.

Crouse pitched 67 innings as a senior, striking out 99 batters while compiling a microscopic 0.88 ERA. Crouse was the main attraction when the Dolphins played their opening game of the high-profile National High School Invitational in North Carolina in March, where scouts outnumbered fans in the stands.

“I actually enjoy it. It’s a good time for me,” Crouse said of the herd of scouts watching his every move. “The radar guns don’t bother me. It actually gets me more pumped up.”

“I love when he’s pitching because he’s so focused. He’s got a knack for being locked in on everything that’s going on in a baseball game,” Dana Hills coach Tom Faris added.

Crouse recently put the finishing touches on his resume, and now he will wait and see where he goes in the draft. He recently threw a bullpen session for the Miami Marlins and went to Angels Stadium for a workout on June 6. He said the Toronto Blue Jays, Cincinnati Reds, Minnesota Twins, Texas Rangers and Boston Red Sox have also shown serious interest.

Regardless of where he goes, Crouse will be ready to take his wide range of talents with him.

“I have a bit of nerves going. The draft can be such an unpredictable thing. But I’m really excited,” Crouse said.