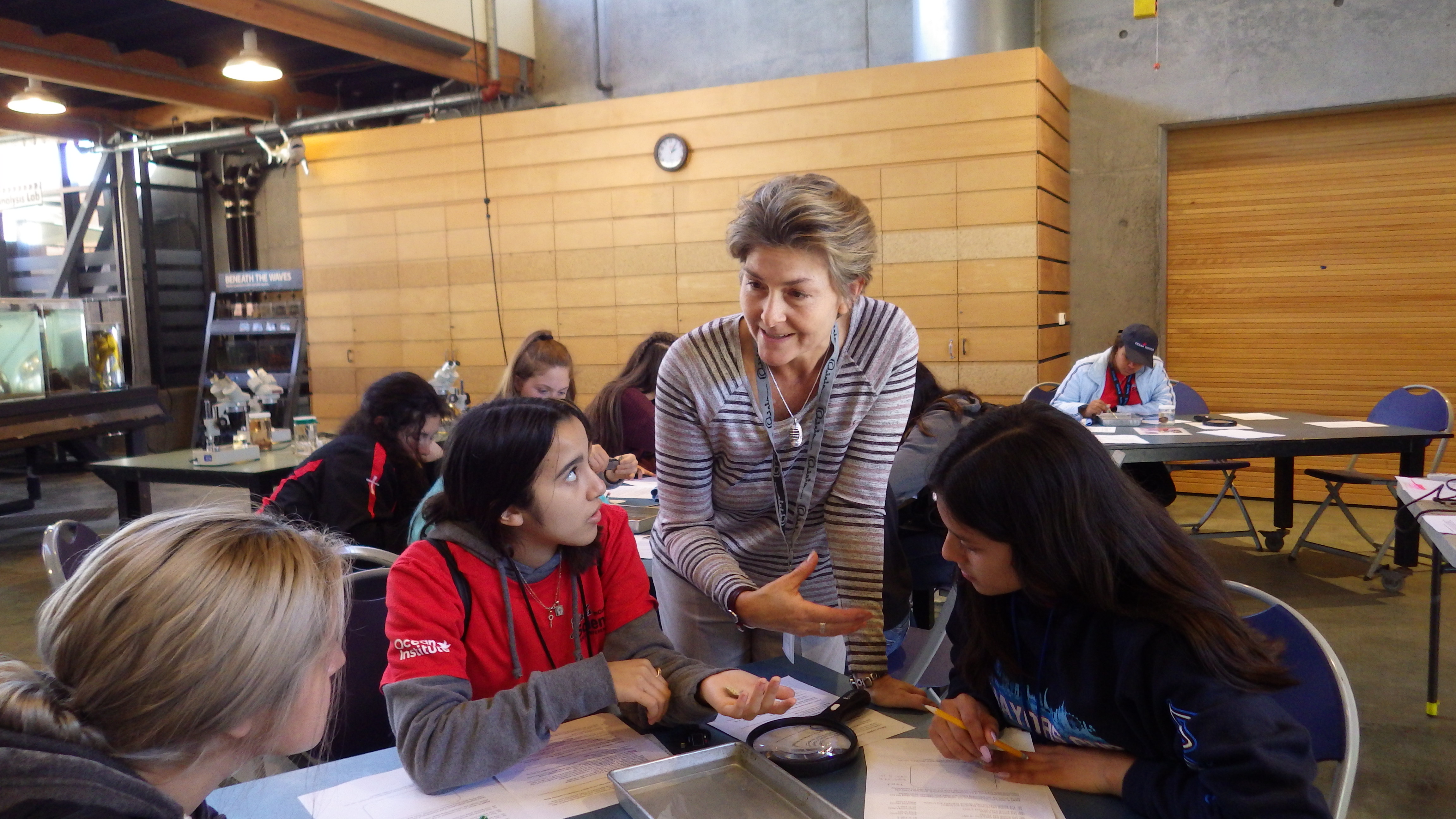 Half of the 120 students participating in the Girls in Ocean Science Teen Conference of the Ocean Institute on March 17 prepare to board the RV Sea Explorer. Photo: Daniel Ritz

A student examines a specimen at the Girls in Ocean Science Teen Conference at the Ocean Institute on March 17. Photo: Daniel Ritz

Students getting hands on with the red octopus, named Houdini", at the Girls in Science Teen Conference at the Ocean Institute on March 17. Photo: Daniel Ritz

When Jennifer Hofmeister of the Scripps Institute in San Diego, handed a red octopus, named Houdini, over to a small group of high-school girls to observe his color change and compression abilities, she believed she was handing them more than they animal, she was giving them a real life tool.

“It’s important for them (the students) to truly understand the challenges ahead of them,” Hofmeister continued, explaining how there is a historically structured and reliable drop-off in female participation in the sciences post required education.

During the 14th Girls in Ocean Science Teen Conference on March 17 at the Ocean Institute, more than 120 high-school girls Angeles were educated, inspired and enabled by an all-female all-star line-up of guest speakers from across California in order to encourage the female voice in the ocean sciences.

The conference is organized, guest speakers are elected and contacted, thanks to a committee of young female volunteers at the Ocean Institute. The committee, overseen by Ocean Institute staff, manages the entirety of the event from the catered food as well as being sure to offer a diverse range of inspiring female special guests.

The students, who partake in the conference either by individual application or scholarship opportunities funded by the Ocean Institute and their donors, are all from San Diego to Los Angeles county.

“These girls are getting exposure equal to, or better than, things I had my eyes opened to during my Environmental Studies undergraduate studies of the University of California Santa Barbara,” said Erica Chuc, of Dana Point, a volunteer at the Ocean Institute for more than 15 years.

Chuc, whose daughter is a member of the Teen Conference Committee, said she treasures how this conference and their speakers engage the youth, teaching them, as she called it, “thinking on their feet.”

The students literally had to think on their feet when they boarded the RV Sea Explorer for a half day of whale-watching and observing on-deck guest speakers including Dawn Garcia, an Avian Ecologist from the Altacal Audobon Society and Lei Lani Stelle, a professor of Biology at the University of Redlands. During the a.m. boating session, students saw two Gray whale breach and show flukes, and experience Ocean Institute volunteer Georgina Stone called, “a monumental moment.”

On land, Dr. Shana Goffredi, a Biology professor at Occidental College, also believed one of the most important parts of the teen conference is making young women aware of the breadth of opportunities available through the ocean sciences.

Goffredi in particular does this through a series of samples and specimens from the deep sea, one of which, appropriately, officially is called the “Yeti Crab,” which Goffredi and her team personally discovered.

As the girls scour over the samples, brought up the depths of places like the miles-deep Monterey Canyon in Northern California, the students eyes sparkle and much like in the case of Houdini the red octopus, you could hear their “eww” turn to “ohhhh.”

At the end of Goffredi’s slide show showcasing her and her teams scouring of the ocean floor, she reminded the young women what many of us already know and often fail to remember, humans beings have reached and studied only five percent of the oceans floor.

In what may have once been a man’s world, Sir Isaac Newton said, “What we know is only a drop, what we do not is an ocean.” The Ocean Institute, and the young female committee that orchestrates the Girls in Ocean Science Teen Conference, believe a more level playing field is soon to come, and that science, and women, will be better for it.