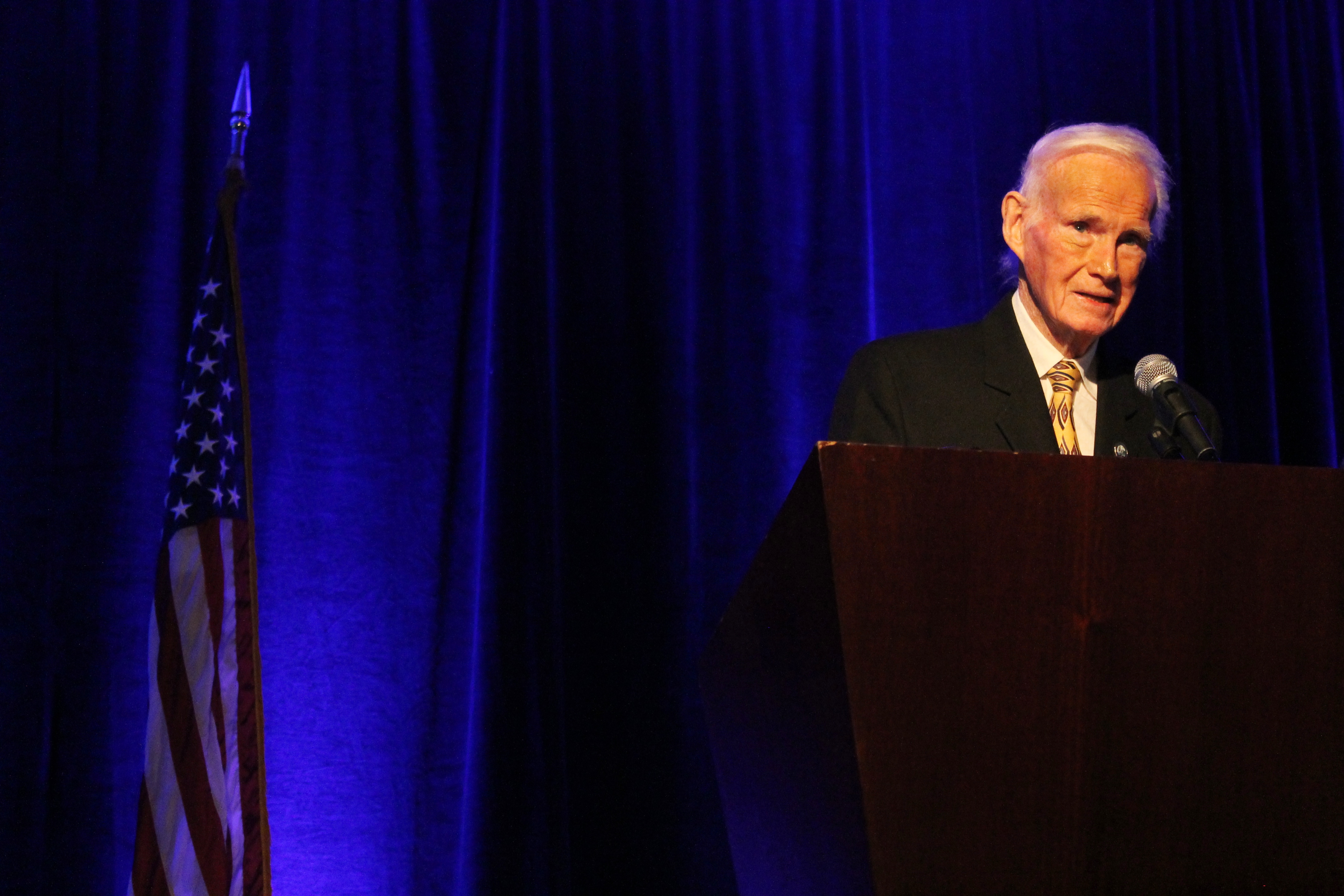 The Voice of Dana Point

Gene Burrus sits down at a small table inside a tucked-away room in the Dana Point Community Center. It’s a place he knows very well, having volunteered his time inside the building for the past 14 years. It is 11 a.m. and he’s just made the rounds greeting a group of seniors that gather every morning to have coffee and eat lunch.

As he sits down and pulls a chair up to the table, he grabs a copy of an old photograph out of his jacket pocket. The photo is a popular one. It is a picture of the Burrus family, standing in front of the old City of Dana Point welcome sign, circa 1933. The picture is now a mosaic on the pedestrian bridge that crosses Pacific Coast Highway. Burrus, 86, was six years old at the time and on vacation with his family from Phoenix. Burrus knew the city by the sea was special then and he feels the same way now.

After a career of broadcasting his signature voice out to thousands of people through a career in radio and television, Burrus returned to Dana Point in 1986 with his wife, Gladys. Since then he has volunteered countless hours at the community center and served as the voice of Dana Point Youth Baseball and the Festival of Whales Parade. He’s even got a ballfield named after him.

On Jan. 30, in front of hundreds of people at the Laguna Cliffs Marriot Resort & Spa, Burrus was honored as the Dana Point Chamber of Commerce’s Citizen of the Year.

“When you volunteer, you do it for two reasons. Number one is to be of service. And also, it does something for you too … which is a wonderful experience,” Burrus said.

As his 87th birthday approaches, Burrus is gearing up for another season of announcing Bronco, Pony and Mustang baseball games. He makes it out to four or five games a week and prepares the same way he did while working for his first radio station back in Glendale, Ariz. in 1952. He shows up early, takes notes and makes sure he can pronounce every player’s name correctly. If there’s one thing that Burrus is, it is a professional.

After serving just under two years in the United States Navy at the end of World War II, Burrus returned home and immediately pursued his broadcasting passion. He earned his radio announcing and engineering certificates and set to work, doing commercials, interviews and even hosting his own country music radio hour.

Burrus entered the world of television in 1958, when they did not have teleprompters or advanced studio equipment. If he had to film three commercials in one day, Burrus would memorize the scripts in a hurry and move on to the next project. It was difficult at first, but he turned it into a science. That work ethic and skill behind the microphone and presence in front of an audience has stayed with him to this day.

“We’re just lucky that we found him and he lives here and has the background that he has,” former Dana Point Youth Baseball board member Rene Cortez said. “He’s always early prepping. That’s just his natural way.”

Cortez, along with former board member John Bott, originally “discovered” Burrus 10 years ago when they were searching for someone to announce baseball games. Bott ventured into the senior center one day and was introduced to the man who would soon become a household name for Dana Point ballplayers and their families.

Burrus has watched generations of players grow up through Dana Point Youth Baseball. Gene and Gladys never had children of their own, which makes the time they spend with the youngsters special.

Because his announcing booth sits next to the dugouts, Burrus is in prime position to listen to the players banter during games. They talk about movies, video games and things they did at school before being snapped back into focus by their coaches. Burrus admits he grins ear-to-ear when he sees it happen.
“The players are like grandchildren to my wife and I. An extended family, that’s the way I feel about them … there’s a close-knit group here,” Burrus said.

Burrus’ other family is in the senior center.

Once a month, Second Harvest Food Bank delivers 96 bags-worth of non-perishable food to the center to be delivered to those in need, and Burrus is in charge of organizing it all. He makes sure the volunteers know what to do and that the bags are ready to hand out to the seniors who need extra help.

His golden voice is also lent to the bingo room and senior dances, where he does the announcing.

When Burrus showed up 14 years ago, there was no flag-raising ceremony in the morning. He quickly changed that. On days he is there, he makes sure something is said around the flagpole about the fighting men and women, past and present.

“He’s brought the senior center to where it is today,” Dana Point senior center director Vanna Murphy said. “People listen to him. He has that voice. It’s why they call him ‘the Voice of Dana Point.’ When Gene gets on the microphone, they respect him so much and believe in him and everything he does.”

Burrus has traveled all over the United States, lending his voice to any who would listen. In Dana Point, he was discovered by the likes of Murphy, Bott and Cortez, but they never would have found him had he not entered the doors of the senior center, looking to help others.