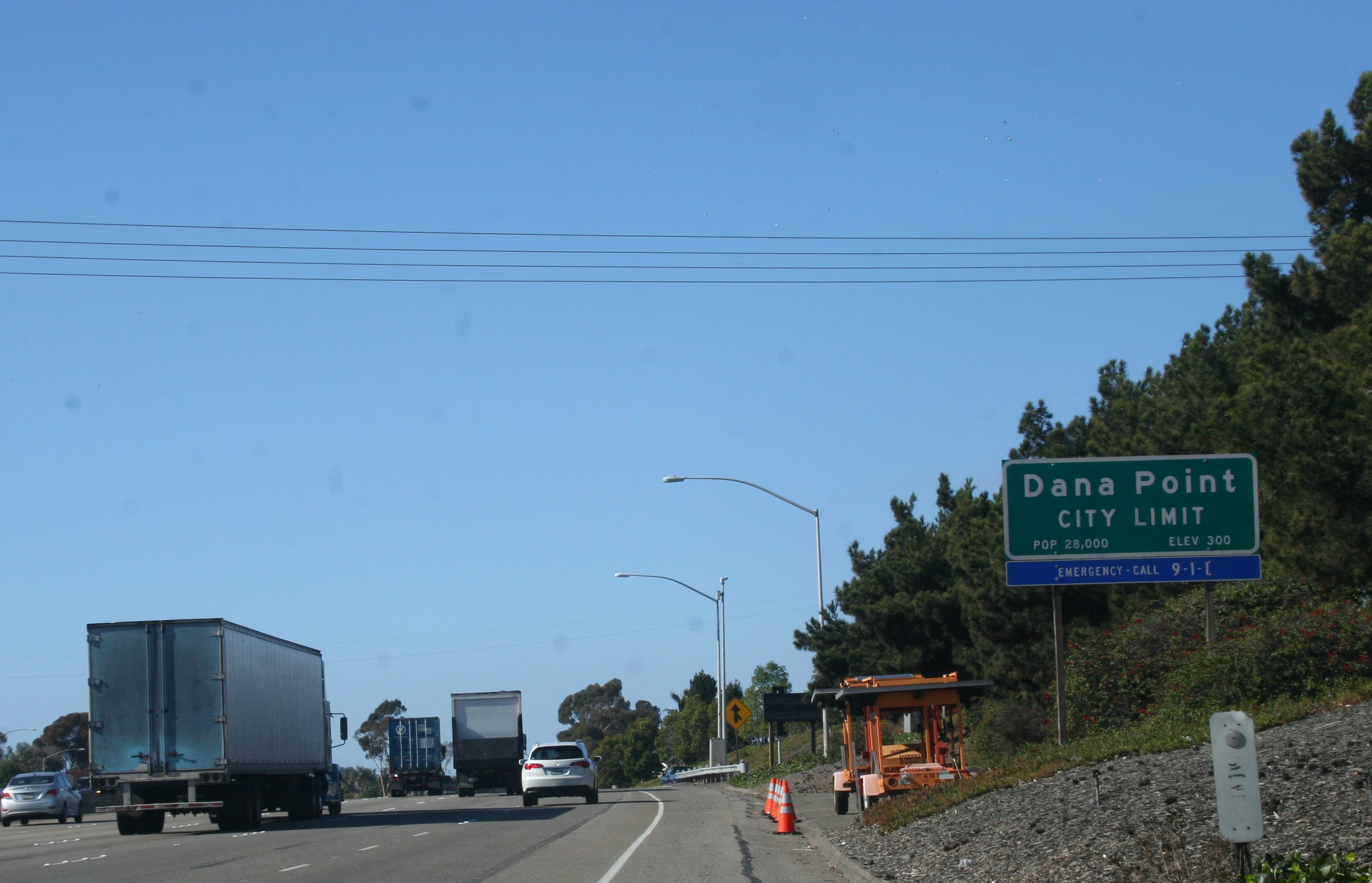 The City in the Middle

Although local Interstate 5 projects scheduled to begin major construction in 2013 are situated closer to neighboring cities to the north and south, Dana Point area motorists will feel the effects.

As Caltran’s I-5/Ortega Highway interchange and the Orange County Transportation Authority’s I-5 widening projects kick into full gear this year, the patience of drivers traveling into, out of and past the city will be tested.

Dana Point City Manager Doug Chotkevys said he is concerned about the duration of time these projects—and others nearby, such as work being done to the Camino Capistrano and Camino de Estrella on- and off-ramps—will impact traffic flow into the city.

“The Camino Capistrano off-ramp construction has been dragging on for far too long and I hope that these other projects do not follow suit,” Chotkevys said.

Dana Point is essentially “bookended” by the projects aimed at eventually improving traffic flow along the stretch of I-5 between San Juan Capistrano and San Clemente.

From a transportation standpoint, we’re caught in the middle,” Chotkevys said. “My hope is that these improvements be completed as quickly as possible to avoid a prolonged impact to the Dana Point area and that Caltrans incentivize their contractors to complete  the work as early as possible.”

Read on for overviews of each project.

Traffic has long been a concern of many San Juan Capistrano residents, but in the coming year, those concerns will be shared with residents of cities to the south, including Dana Point and San Clemente.

Caltrans is scheduled to begin major construction for the massive Interstate 5/Ortega Highway Interchange project in mid-February. It’s a project that’s been on the minds of traffic officials, San Juan Capistrano city leaders and residents for more than a decade and will likely stay that way for at least two more, when it’s scheduled to be completed in the spring of 2015.

The $86.2 million project will completely rebuild the Ortega Highway bridge over I-5, construct a new northbound loop on-ramp, reconfigure the northern portion of Del Obispo Street leading to the bridge and apply several changes to existing on- and off-ramps.

Traffic engineers identified the interchange as a major choke point and initiated a study of the area in 2000, according to Caltrans’ 2009 project report. At the time the report was published, the overburdened interchange carried about 99,000 cars per day. Engineers said the current configuration could not accommodate a projected increase in traffic of around 121,000 cars by 2030.

Within the project’s scope area, studies also showed that accidents along Ortega Highway occurred at twice the rate of the state average and “at a much higher rate” on the I-5 southbound off-ramp for similar areas. According to the report, the roadways in the area featured nonstandard lane widths—10 and 11 feet, when Caltrans requires 12 feet—and that Ortega Highway, which predates I-5, did not have the required shoulders—about 8 feet—for bridge separation.

“This is a whole reconfiguration,” Roberts said. “Part of this project is to relieve congestion because the area is growing.”

Although San Juan Capistrano will bear the brunt of construction, increased congestion along detour routes make this a local problem for all motorists traveling through the city.

“It is a regional challenge,” former city council member Laura Freese said. “Dana Point, Laguna Niguel and our other neighbors to the north and south are definitely going to feel it because they use that interchange and they use Del Obispo and our other streets to get to the freeway. They’re all going to have to figure out alternate routes.”

One of Freese’s last acts as a council member included establishing the Economic Preservation Committee, a group made up of city officials and local business owners that aim to curb the adverse effects of the project on business, especially in downtown.

Together, the group has already formulated several ideas and voiced some of their concerns with Caltrans and the department’s contracted project management firm CALTROP. Following Caltrans’ closure of a Chevron and Jack in the Box, both on the corner of Del Obispo Street and Ortega Highway, the committee submitted their own design for a welcome banner to be wrapped around raised chain-link fences. Caltrans combined their own design standards with the committee’s suggestion to produce the current banners, which serve to welcome and inform motorists.

The committee has also reached out to the city and the Orange County Transportation Authority to consider lowering rates to use Historic Town Center Park for events, creating a trolley service to carry passengers from JSerra Catholic High School into downtown and decreasing Metrolink fare prices.

Caltrans is bound by strict rules that prohibit promotional projects that do not focus on traffic, according to Roberts. Caltrans and CALTROP have both taken on community outreach efforts, however, through informational meetings, publishing reading material and social media tools, like Facebook and Twitter, to inform residents of construction updates.

By the end of the month, Caltrans expects to have a complete project schedule, according to Roberts. For now, the city and the committee have been told that construction work would be limited to evening and early morning hours. Full closures are expected on the northern portion of Del Obispo Street, going as far west as El Camino Real, for two separate periods of three and four weeks. Proposed dates and times of the closures will be included in the project schedule.

San Clemente’s highway project is on track to get underway later in the year, with the first work being done on “Segment 2” of the larger Orange County Transportation Authority project, the widening of Interstate 5 between the San Clemente city line to just south of Avenida Vista Hermosa.

The project will widen I-5 to accommodate a high occupancy vehicle lane through the length of the project and is slated to last until 2014. The third segment of the total project, which includes the widening of the Avenida Pico exchange, is scheduled to begin construction in 2014 and last until 2017.

San Clemente Assistant City Engineer Tom Bonigut noted that the process of preparing for the widening of the interchange had already begun. Two properties, the Shell Oil station and Burger Stop, will have to be acquired by OCTA and Caltrans because they will have to be demolished to accommodate the widened road.

Julie Toledo, who is handling community outreach for OCTA on the project, said the appraisal process for the properties is ongoing now. Once that is completed, which she estimated should take a couple of months, negotiations between OCTA and the property owners will begin.

Toledo believes that since all of the public outreach on the project had shown the two businesses as being eliminated, the public, the city and the business owners themselves were all aware of what was going to happen.

The takeover of two businesses in San Juan Capistrano—the Chevron gas station and Jack in the Box, both on the corner of Del Obispo Street and Ortega Highway—had caught residents and city officials there by surprise.

Toledo and others from OCTA have become fixtures at city events and meetings, trying to get the word out about the project. OCTA has a regular booth at the monthly Farmer’s Market on Avenida Del Mar and has been meeting with a number of stakeholders throughout the city, including civic groups and homeowner’s associations. Toledo said a larger community meeting would be held at the end of the month to provide updates on the project.

Another unrelated project that will affect residents of San Clemente and Capistrano Beach is the widening of the overpass on Camino de Estrella/Camino de los Mares. The project is being done by Caltrans and is on track to be completed in May, David Richardson, a spokesman for Caltrans, said.

The project was conceived because of the increased traffic at the exit over the last several years, Richardson said, and is adding an additional left-turn lane to the off-ramp in an effort to eliminate or reduce traffic problems on I-5.

As drivers approach the exit, the traffic light can sometimes delay drivers coming off the freeway, Richardson said. The bridge is being widened to accommodate that traffic. The project necessitated the removal of three palm trees to accommodate the widening of the street and the bridge.

Richardson said Caltrans had contacted the city about possible mitigation of the issue but did not receive a response and thus went ahead with removing the trees.