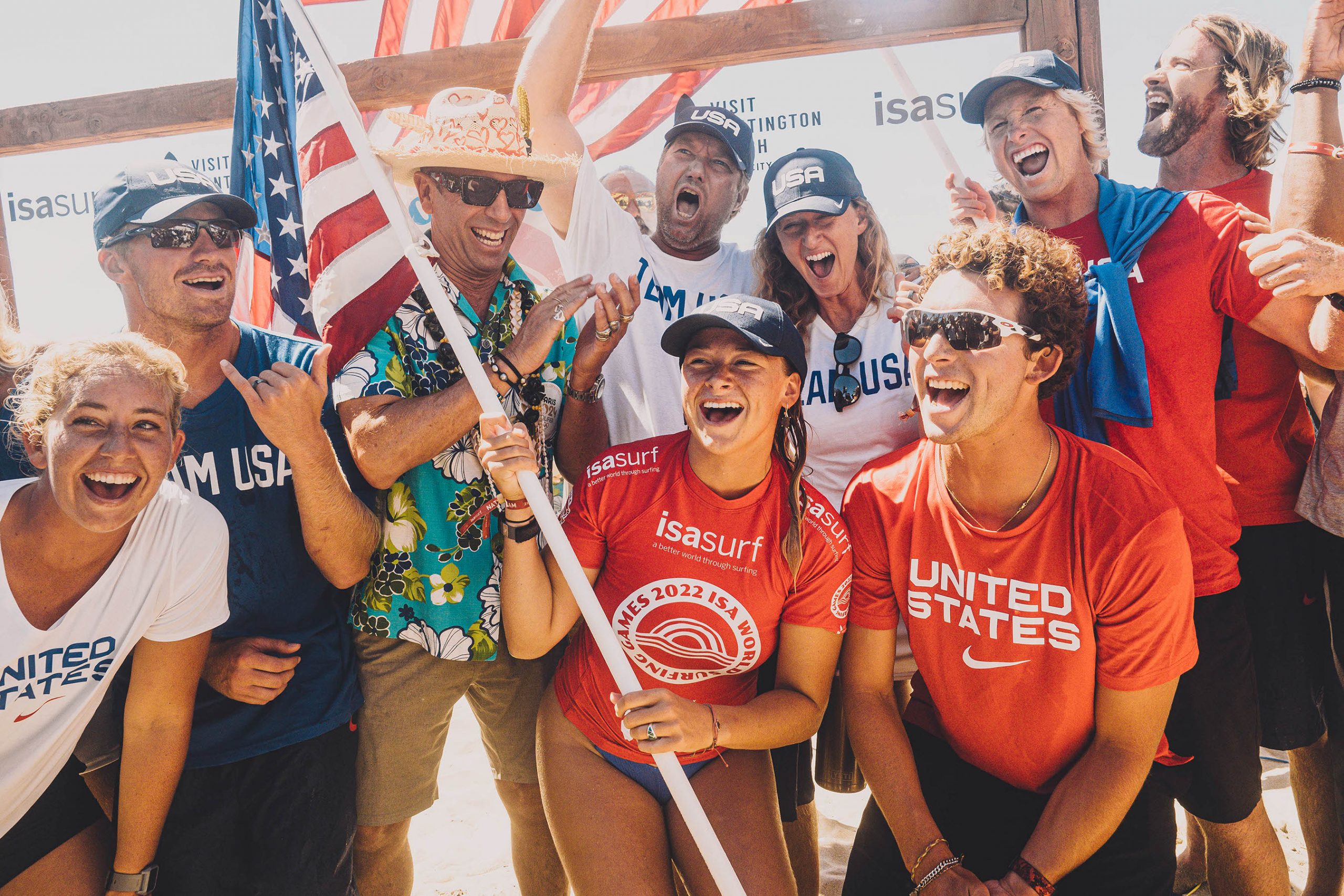 After a high-pressure, high-stakes week of surfing at the ISA World Surfing Games in Huntington Beach, San Clemente’s Kirra Pinkerton came out on top, winning the women’s gold medal and leading the American squad to their first team gold since 2009.

Not only that, thanks to a new rule change, by virtue of winning the women’s division, Pinkerton has earned an extra Olympic spot for the American women.

“I’m incredibly happy right now. I don’t even know what to say; this whole week has been really cool,” Pinkerton said after the victory celebration.

Heading into the finals, Pinkerton was the only American surfer left in the draw after fellow San Clemente surfer and 2020 Olympian Kolohe Andino and Santa Cruz’s Nat Young were knocked out of the event.

Hawaii’s Gabriela Bryan and Zoe McDougall also had strong showings throughout the contest, but when it came down to crunch time, it was 19-year-old Pinkerton who had the weight of her country on her shoulders.

In the final, she faced seasoned competitors in France’s Pauline Ado, Australia’s Sally Fitzgibbons and Peru’s Daniella Rosas, all of whom competed in surfing’s inaugural Olympic event in Japan.

Undaunted, the 2018 WSL World Junior Champion settled into the final early, posting a 5.0 right out of the gates. The pressure mounted as the time ticked off the clock, and Pinkerton found herself needing a score. Finding a diamond in the rough, she paddled into a mid-sized wave, went to work, and came away with a 6.30—just enough to turn the heat and win the gold.

In celebration of her biggest win of her young career, Pinkerton was chaired up the beach by teammates and Lowers regulars Andino and Griffin Colapinto.

“Every heat has been almost impossible,” she said afterward. “The fact that it all came together at the end, I’m just in complete awe right now.”

Pinkerton’s win was enough to put the American team over the top in the overall points standings. Edging out the Australians by a mere 185 points, the U.S. won team gold—for the first time in more than a decade.

And because of Pinkerton’s effort, the U.S. Surfing squad has earned an extra spot for a woman on their roster at the upcoming 2024 Paris Olympics. The surfing event will be held at Teahupoo in Tahiti—also known as French Polynesia.

On the men’s side of the draw, Japan’s Kanoa Igarashi earned the top spot on the podium, which followed a strong season of the WSL Championship Tour that saw him make the prestigious Rip Curl WSL Finals at Lower Trestles.

Having grown up in Huntington Beach, Igarashi’s win in front of the hometown crowd was especially sweet for the 2020 Olympic silver medalist.

“That was definitely really special,” Igarashi said. “Obviously, an individual win is great, but to know that I secured the spot for Japan in the Olympics coming up, wow, that’s such a special feeling. Whether I go or whether one of my teammates goes, just knowing that there will be someone there representing, that means a lot.”

Similar to Pinkerton, Igarashi’s win guarantees an additional male surfer for the Japanese team at the 2024 Paris Games.

“The Olympic wave is truly rolling strong after an historic event in Huntington Beach. USA and Japan can now look forward to competing in the mind-blowing waves of Teahupoo as a part of Paris 2024,” said ISA President Fernando Aguerre. “It has been so special to have this incredible event take place in the location of the very first World Surfing Games at the start of the long surfing paddle to the Olympics in 1996.”’