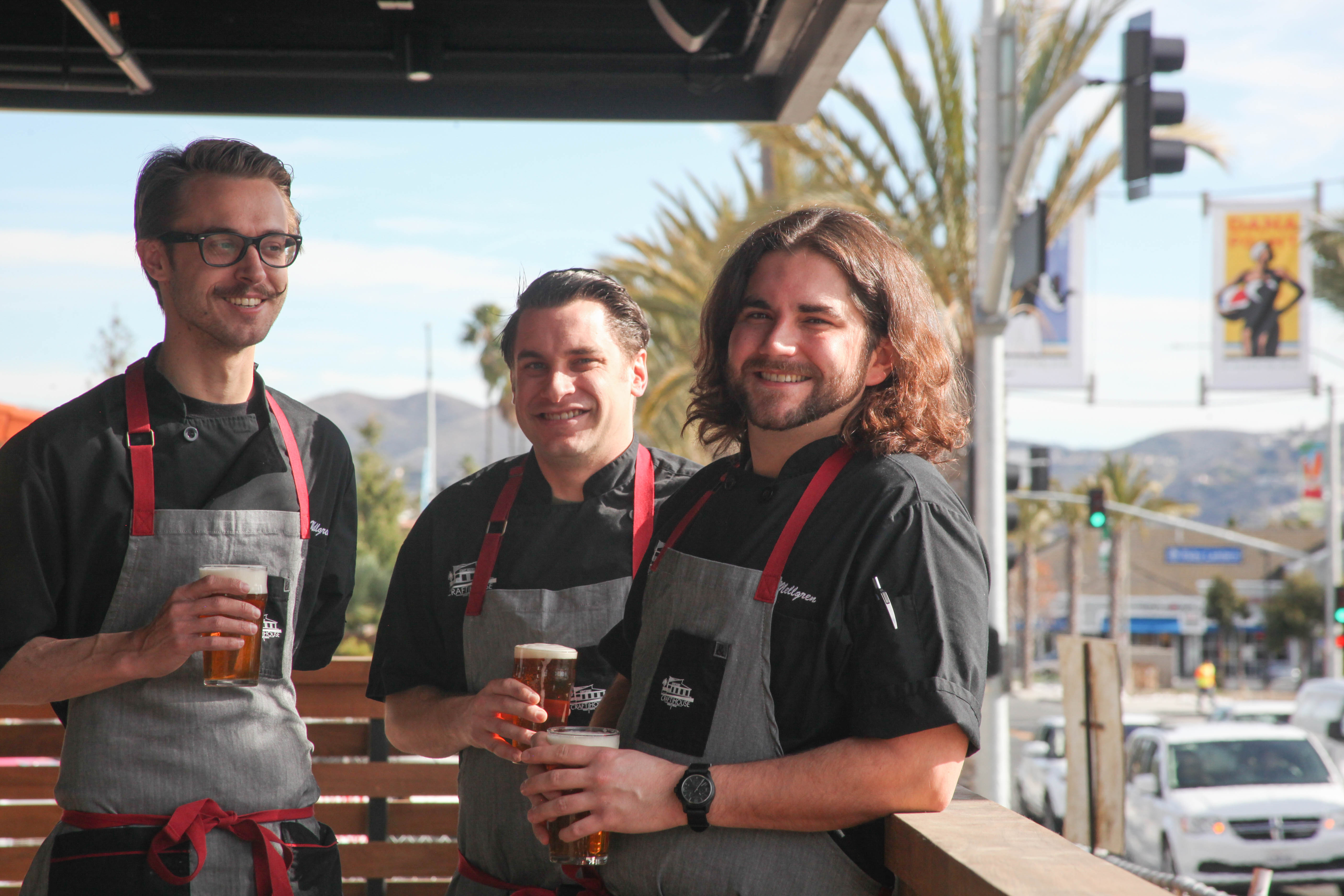 Story and Photos by Alex Paris

Perhaps the greatest advantage of beer is its versatility. It can be simple in taste or extremely complex. It can be as pure as four ingredients or formulated to adopt almost any flavor from any ingredient imaginable. It’s the amenable, unassuming nature of beer that’s conducive to widespread appeal. There’s a flavor out there for everyone, and some people become so passionate about those flavors they feel compelled to create and share them with everyone else. It’s an inherently community-forming craft.

Pioneers of the local craft scene, such as Pizza Port and Left Coast, have helped create a thirst for quality that they themselves—and a new wave of passionate entrepreneurs—aim to quench. The beer culture in south Orange County is diversifying and expanding, and listed below are the breweries and some of the trendsetters contributing to that shift in the tri-city area.

After opening their doors in Solana Beach in 1987 and again in Carlsbad in 1997, Pizza Port chose San Clemente as its third locale in 2003, making it the first brewery to establish a presence within the city’s borders.

The company has been brewing its own beer since 1992 and the San Clemente Pizza Port is no exception, offering patrons a wide array of house-made craft beer, much of which is served exclusively on location.

Pizza Port brewer Trevor Walls said customers constantly push him to adapt their selection. A small cask stashed in a fridge behind the bar is symbolic of Pizza Port’s experimental, community-centric way of brewing. It holds one-off beers with ingredients almost everyone loves but almost no one else brews with—things like Mexican chocolate, Nutella and even Captain Crunch cereal. The brewery has also been known to utilize ingredients from the farmers market down the road in addition to indigenous herbs such as sage.

Walls said his first taste of Pizza Port’s El Camino IPA—the first India Pale Ale brewed in San Clemente—came long before he began working for the brewery. A big part of what makes San Clemente brewers unique, he said, is that they all make exceptional IPAs. Though the brewpub serves a wide variety of styles on tap, a whopping six out of 24 are IPAs—a result of the constant demand from customers for new variations of the style.

Walls attributed some of the local preference for IPAs to how it complements the bold local flavor in the area, such as the spice of Mexican fare and other bold cuisines.

“South Orange County in general is a culmination of a lot of people; it’s a melting pot,” Walls said. “So their beer has to be unique; it’s got to stand out.”

Established in 2004, Left Coast Brewing Company is the second oldest brewery in San Clemente and by far the largest in volume and distribution. The brewery offers six beers available in bottles year-round in addition to a beer club that grants participating patrons priority access to two different bottles of barrel-aged beer every three months.

Left Coast’s barrel-aged beer is occasionally available on tap at their tasting room in San Clemente, which is set to add three more taps in the near future. The brewery is also preparing to open a new taproom near the Spectrum Center in Irvine, which will sport 20 to 30 taps, with up to 10 taps allocated to barrel-aged beers.

Master Brewer Randal DiLibero said the inspiration for new beers comes from a variety of sources. Sometimes the brewers will discuss the beer they’re drinking and suddenly have an epiphany. Or, as in the case of their triple IPA, it comes from customers’ demand for a certain style. The Del Mar Street is a German-style beer created with Oktoberfest in mind. DiLibero was inspired by the similarities between the German festival and San Clemente’s Fiesta Music Festival held annually on Del Mar Street, and he knew the summer heat necessitated a crisp lager. Another unique beer that’s coming out this week, Orange County IPA, derives its flavors from actual Orange County oranges as well as Mandarina Bavaria hops, which smell remarkably like mandarin oranges.

It seems fitting that craft beers’ influences are so various, since the way people experience craft beer varies so much.

“You might not be able to describe the complexity,” DiLibero said, “but there’s a lot to talk about not just the flavor itself but how it makes you feel as a person. What does it remind you of? Does it smell good? Is it harsh? Drinkable? You break it all down and then start talking about the flavor profiles. The more you explore, the easier it gets to talk about complexity and the little things.”

The fledgling brewery is growing up fast, with enough popularity to triple their capacity from 1,200 barrels of beer to 6,000 before their second anniversary. Though standing on their own now, the San Clemente brewery was originally hamstrung by delayed construction, which resulted in Pizza Port lending a hand and a brewery to produce their first beer, San Clemente IPA. That beer inspired the crowd favorite “No Name IPA,” and the brewery is now known for its hoppy beers. But they’ve already won awards for their Irish Red and Schwarzbier, and have a wide variety of other styles such as Unicorn Juice, the passion fruit flavored American Wheat Style, and a Honey Blonde Ale that’s available only at Board and Brew.

The way the brewery seamlessly transitions into the tasting room creates “the feel of a production facility, kind of like sitting in the kitchen of a restaurant. We wanted it to be that way because you get to interact with everyone” says Tom Cordato, a partner at Artifex.

And Artifex listens to the court of public opinion: if sales are down on a particular beer for a couple months, they won’t brew it again and brew something else instead.

In an effort to offer something new, Artifex recently acquired eight wine barrels to age beer in. They also hope to start bottling for the local market by the end of the first quarter and open a tasting room outside of the tri-city area by the end of the year.

Artifex originally chose San Clemente for its geographic centrality and for the potential Orange County has to emerge as a craft beer-centric place.

Johnny Johur, one of the brewing partners, was surprised by how friendly and helpful other breweries have been and said local collaboration with the brewers at Pizza Port and Left Coast provides motivation and inspiration to “continually make better beers.”

The unassuming locale and casual atmosphere of The BrewHouse conceal an almost daunting selection of 30 rotating taps of craft beer, one of which is the establishment’s recipe brewed in collaboration with Valiant Brewing, and none of which have been repeats since The BrewHouse opened its doors last year in San Juan Capistrano. Guiding visitors through the menagerie of brews are the owners, bartenders, brewers and beer enthusiasts, Ron Bland and Andrew Reed.

“Every individual who comes in here has a different way of looking at things and different things that they want out of their experience, so you just have to figure out what that is based on that individual,” Bland said. “I can sit down with someone and in 10 minutes get a good idea of what their palate is really like.”

Although they keep a few familiar beers on tap, some brews are so exclusive that Reed and Bland have to pick up the kegs themselves because the brewers don’t distribute. Perhaps the most exclusive beer they serve is their own, which, for the moment, can only be had there. It’s a Belgian strong blonde style that cycles with its two variants—a blackberry version called Berry Vunderf’l and a cherry version called Rainy Sundae that has “a very robust cherry quality without tasting like cough syrup or anything like that because we use real cherries instead of artificial flavoring,” Bland said.

Bland said he first developed his craft beer palate by purchasing bottles of the same style of beer from different breweries and sharing them with fellow members of his beer club, the Orange County Beer Society. The BrewHouse’s massive list of bottles and brews on tap demonstrates that he still does a lot of purchasing but now shares them with his customers.

San Juan Capistrano has a new brewery in planning called Docent Brewing. Partner Joe Wilshire recently signed a lease for property close to the San Juan Creek Trail on Calle Aviador and hopes to open the brewery sometime in the third quarter of this year, contingent on state approval. Wilshire and his three partners plan on brewing a wide spectrum of beers mainly for the residents and visitors of San Juan Capistrano.

“We really want to focus on our tasting room, having a place the locals can go to hang out to taste new recipes and take a growler home,” Wilshire said. “It will all be indoors but will have nice views of the mountains.”

While Dana Point has yet to add a local brewery to its landscape, a handful of the city’s restaurateurs have embraced craft beer as an integral part of their dining appeal. Establishments such as The Shwack Beach Grill, StillWater Spirits & Sounds and the soon to open Craft House have made a point of offering diverse selections of craft brews. The Shwack has 12 taps and usually at least one serving a brew from San Clemente to accompany its beach town atmosphere. StillWater has 50 beers on tap with a portion dedicated to a different local brewery each month to serve a variety of their styles—this month it’s Left Coast.

Though the name hints at brewing, Craft House isn’t in the business of brewing its own beer. However, Dana Point’s newest eatery, slated to open in early March, values craft brew and plans to have a house beer on tap called 1914 Heritage Ale—an extra special bitter style co-branded with AleSmith Brewing Company of San Diego.

“We chose that for the house beer because it’s the happy medium between the hop enthusiast and the light beer drinker,” said Craft House owner and chef Blake Mellgren. “It’s something that fits the full spectrum.”

The restaurant will have seven other craft beers on tap representing breweries from San Diego to Paso Robles, with an eclectic farm-driven menu to pair with them. They describe their food and drink menus as “living, breathing things” that will be different every time a diner visits. Craft House sous chef Crews Wells describes their philosophy in the same way that local craft brewers do.

“As much as we want to educate people and share our knowledge with people, we’re not trying to tell them how it is,” Wells said. “We’re trying to figure out their palate and the best way to make them happy.”

The restaurant will open with limited hours initially. Eventually, Mellgren plans to expand their hours to include Mondays, dedicating them to tap takeovers, full beer dinners, wine dinners and industry nights.

With more breweries cropping up on the horizon, south Orange County is poised to develop a reputation as a destination for unique, quality beer.