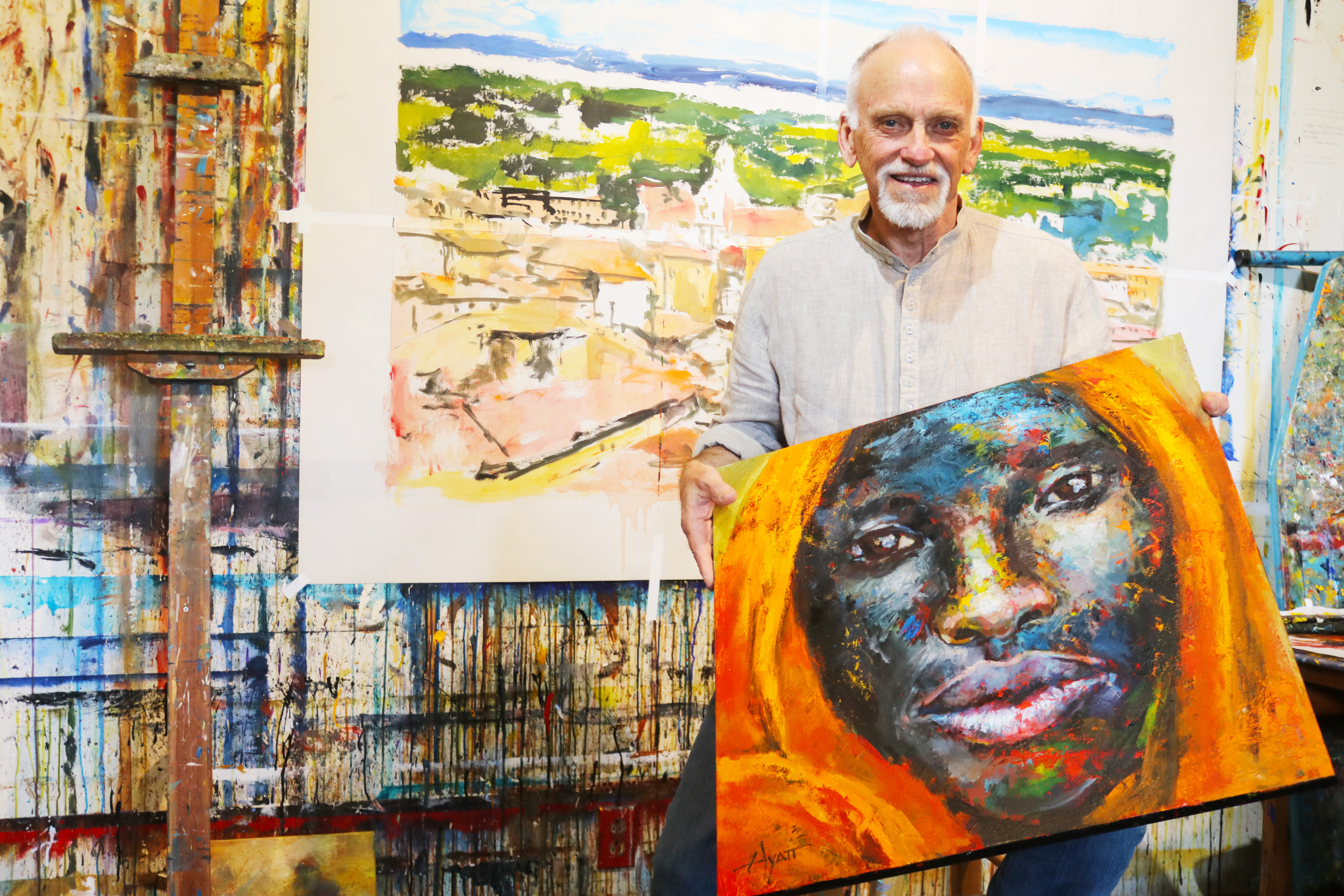 By age 27, Dana Point resident and artist Hyatt Moore had achieved all of the long-term goals he had set out for himself to achieve. He was the art director at SURFER Magazine, he owned his favorite sports car, a Porsche, as well as a sailboat, and he found the right wife.

Fifty years later, his wife Anne was the only one of those four “goals” that remained in his life.

The rest, Moore let go, embarking on a life-long redirection toward following his passion in what he referred to as a “pursuit of quality.” Having reinvented himself many times over, he now produces art for an international audience from his home in Dana Point, and there’s no indication he has any intention of stopping.

Breaking down and out

Moore, who grew up in Palos Verdes outside of Los Angeles, moved to Dana Point in 1969. His father was an artist, but only produced art as a hobby.

“People always used to say I was an artist like my dad. I always took that to mean I couldn’t take art seriously,” Moore said, referring to his original perspective on art.

Moore said that he’s always been drawn to beauty around him. He is naturally drawn to things evident of the imperfect nature of the world and things that look distressed.

This insight into an attraction to beauty, novelty and inspiration came to a head after Moore realized that although he had achieved his goals, depression had set in and he was less happy than he had ever been.

Nine hundred miles into the Mexican Peninsula, Moore had a spiritual breakthrough after reading the Late Great Planet Earth by Hal Lindsey. Moore’s father had hounded him to read the prophetic book surrounding the Christian rapture and after Moore read it, he had an epiphany that he was to invigorate his spirit and live an exciting life. He later claimed this epiphany has remained a foundational thread throughout his life.

“I turned myself in,” Moore said. “I turned myself to God and also realized I had to start acting on the things that inspired me. I had to believe in this to make it happen. I told myself I could no longer be afraid of what I could offer. I wanted to have a life of purpose.”

Just one year later, Moore left his job at SURFER Magazine and moved to Guatemala where he would take a position as an art director for Wycliffe Bible Translators in Guatemala. He believed this would allow him to be creative, but surround himself with a changing and stimulating environment.

While working in rural Guatemala, Moore felt moved to begin painting again, initially painting with crude materials on sketchbooks. Inspired to paint the indigenous and local people, Moore would paint mostly portraits and would leave them with the subjects.

Four years later, Moore became the president of Wycliffe and was driving down Pacific Coast Highway in Laguna Beach when he saw a large canvas painting in a gallery window.

“I don’t know what hit me,” Moore remembered with a smile. “I thought to myself, ‘I can do that.’ Not exactly that. But I could paint. I knew it right in that moment. In that moment, I became a painter.”

In that moment, for the second time, Moore said he acknowledged the powerful driving force that followed his inspiration.

“There’s nothing more exciting than getting the initial idea. It all gets more complicated from there. You start to see beauty around you where it has always existed.”

Moore began capitalizing, and prioritizing, his painting. He set a time and space dedicated to crafting his artistic skills. Today, he gives seminars to new painters, and said prioritizing is an important step.

“A lot of people break out their paints, paint for an hour, and then have to clear off the dinner table. It’s doing that again and again. You are fighting too much inertia,” said Moore.

Later that year, after Moore had made large-scale changes at Wycliffe in this newly aroused creative state, he was voted out of his position as president by Wycliffe’s board of directors. It was at this point that Moore decided to commit to painting full time.

“I realized that if I didn’t take this seriously, there was no excuse for me,” Moore said.

Now, Moore and Anne work as full-time artists in their home, which doubles as a studio high in the hills above Dana Point. He described making a living with painting by entering into a new level of commitment to his passion.

Moore still paints portraits of people from a variety of cultures, but says that he has branched out to other forms of art as well. Although admittedly, his wide appeal can be a marketing challenge, Moore said he is enjoying his art more than ever.

Recently, at the Dana Point Symphony performance on Feb. 2, Moore gifted guest conductor Miguel Campos Neto, from Brazil, with a newly finished portrait. He also recently finished a project called The Beatitudes that will also be released in book form.  The Beatitudes is Moore’s conceptual interpretation of the famous introduction to Jesus’ Sermon on the Mount.

“I will never be bored. I’ve been granted a gift that will interest me for the rest of my life,” Moore said. “Maybe I will have yet another ‘stoplight’ life-changing experience, but that’s good, and it’s exciting.”

By not limiting himself to his goals, Moore has elevated himself again. He said only one goal remains during this phase of his life.

“My only goal is to explore what I love as far as I can for as long as I have the time to.”

View Moore’s art and a calendar of gallery events on www.hyattmoore.com.