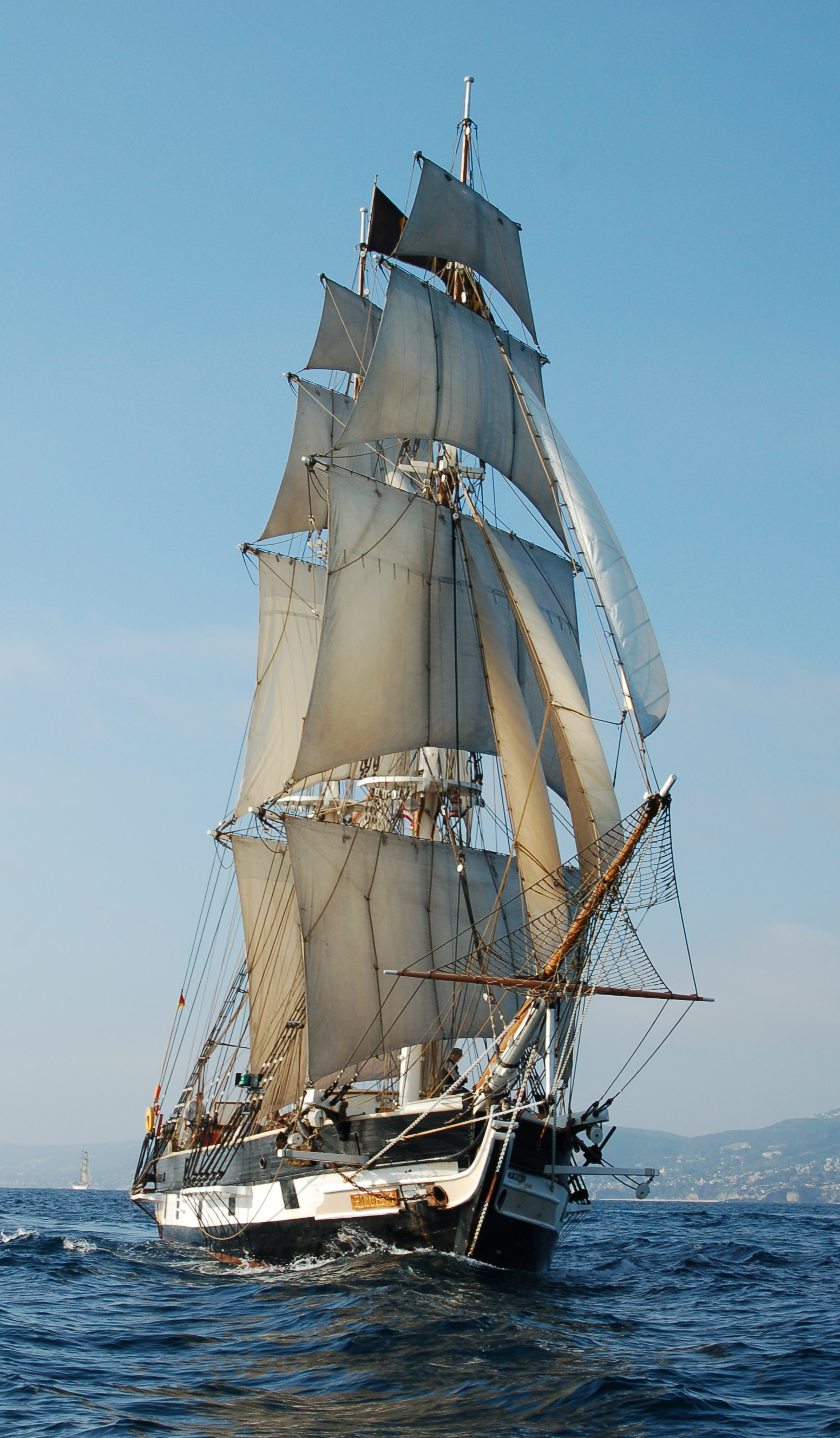 Volunteers onboard the Ocean Institute’s tall ship Pilgrim, a replica of the brig on which Richard Henry Dana Jr. sailed on from 1834 to 1836, are currently enjoying the vessel’s annual sail.

During most of the year, the ship is moored alongside the institute and is used for maritime history education programs. The ship is cared for by a small army of volunteers, who are invited on the annual sail as the institute’s way of saying thanks for their volunteer support.

Most of our crew of 35 are sailing onboard the Pilgrim for the first time. Others are seasoned veterans, who have made the trip many times. Like their sailing experience, their ages vary from some in their teens to many who are over age 55.

In preparation for the trip, new members undergo a safety-at-sea course, which includes jumping blindfolded and fully clothed into the water from the Pilgrims’ deck railing and climbing onboard a life raft. Other preparations include re-running lines throughout the ship, hauling heavy sails out of storage and lashing them to the yards.

I first began sailing on the Pilgrim as a deck hand 35 years ago. Twenty-seven years ago I first served as its captain. Today, I have relinquished captain duties to Gary Heinrich and I serve as harbor pilot. Chief among my duties is getting the ship safely in and out of harbors.

We began our annual voyage in late July, first traveling to Santa Barbara for a festival. A fireboat shooting a water cannon greeted us and escorted us into the harbor. We’re currently visiting the Channel Islands before a brief return to the Ocean Institute. We then head to San Diego for a tall ship festival. We’re due back in Dana Point just after Labor Day, in time for the Ocean Institute’s 30th annual Toshiba Tall Ships Festival, which runs from September 6 to 7.

So far along our trip, some of the challenges we’ve faced include leaking decks. The Pilgrim is used throughout the summer in the Ocean Institute’s school programs and we had to leave the institute before washing the decks. As a result, the wooden decks dried out and began to leak. Many of our crew members have woken in the middle of the night as water leaked into their bunks.

While on, crew members are engaged in such activities as cleaning the ship and keeping watch. Even when the Pilgrim is tied to a dock, crew members must watch as the ship goes up and down with the tide that the dock lines don’t get too tight. When anchored off an island, they watch to ensure that our anchor lines hold.

One of our only paid crew members is our cook, who is experienced at preparing a wide variety of delicious cuisine. Our crew enjoys three ample meals per day plus snacks. All is courtesy of the Ocean Institute. Our way of saying thanks for their many hours of volunteerism.

Our seas have been calm and we’ve seen much wildlife. We’ve seen pods of dolphins swimming by as well as sea lions and many kinds of birds. We have passed many large cargo and container ships. Everyone onboard is excited. The ship is performing beautifully and it’s shaping up to be another outstanding sailing year.

I invite anyone interested in tall ships to come to the Tall Ships festival, tour the Pilgrim and meet our crew. We have an outstanding group of volunteers and you’re more than welcome to become a part of it

Jim Wehan is a volunteer with the Ocean Institute and longtime 35-year member of the brig Pilgrim crew. He first served as captain 27 years ago but has since relinquished his duties. Wehan now serves as the vessel’s harbor pilot. He, along with the more than 30 volunteer crew members, are currently out to see on the ship’s annual voyage. After stints along the Southern California coast, the Pilgrim will arrive at the Ocean Institute in time for the 30th annual Toshiba Tall Ships Festival.