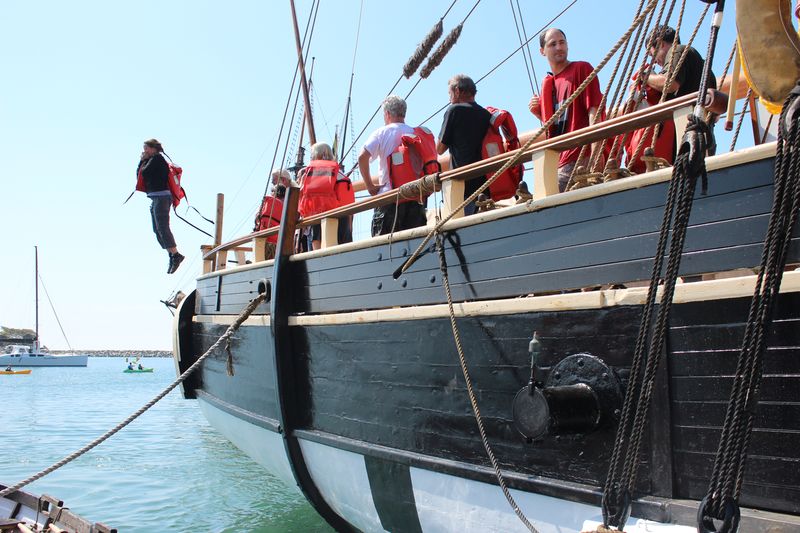 Story and Photos by Andrea Papagianis

As the marine-layer burned off Sunday morning, a mishmash group of unlikely sailors filtered out of an informational meeting held in a nautical barn.

About 20 in all fumbled through paperwork and held tightly to backpacks and knapsacks full of gear, and zipped their jackets a little higher; savoring their last bit of warmth and refuge from the nearby Harbor waters they would soon be jumping in to.

Made up of men and women of various ages and backgrounds, the group stepped onto the decks of the historic tall ship Pilgrim, parked right in front of the Ocean Institute’s doors. The ship is a replica of the vessel that carried Dana Point’s namesake, Richard Henry Dana, Jr. to the Southern California shores in 1835.

On this day, the Pilgrim played host to new volunteers entering their last weeks of training prior to setting sail on a two-week-long journey along the California coastline—from Santa Barbara to San Diego—before returning to its homeport, at the OC Dana Point Harbor for the 29th Toshiba Tall Ships Festival.

From ensuring each crewmember’s lifejackets were properly secured to deploying an emergency life raft, the volunteers came together and established camaraderie—a sailing essential.

“It is really an amazing adventure for everyone,” said Lindsey Philpott, a Pilgrim crewmember and training master. “Now they know who to talk to, who to follow and who will lead … because we are all doing this as one.”

One-by-one and strapped into their life preservers tightly, they stepped up to the brig’s stern and plunged into the waters below, simulating an overboard emergency. Although an unlikely event, the volunteers needed the training said Dan Stetson, president of the Ocean Institute.

Sopping wet and cold, the group returned to the ship for a second jump, this time with their life jackets dangling over one shoulder. Once in the water, volunteers floated on their backs while securing their safety vests. Philpott looked on overhead from the ship’s deck, giving pointers on water entry techniques and encouragement to each participant.

For their third and final jump, members of the group secured colorful bandanas around their eyes to mimic nighttime conditions. With Philpott’s assistance they climbed the ship’s railing and shakily entered the water. From there a bizarre game of Marco Polo ensued as each volunteer found their way to a waiting group of fellow sailors.

Three pods of volunteers floated in the water as stand-up paddlers and beachgoers looked on. Then with the help of their comrades, each volunteer made their way onto a waiting emergency life raft. With the completion of overboard drills, the new volunteers wrapped up their months of training to qualify to participate in the annual sailing trip.

“It becomes sort of a rite of passage, it is a time when those who can lend out a helping hand,” Stetson said, adding that the training goes hand-in-hand with other institute programs when students only succeed when they come together.

The volunteers will join the ranks of experienced tall ship sailors when the Pilgrim sets out on a two-week voyage Monday morning. The ship will travel up the California coastline to Santa Barbara before making stops in the Channel Islands, Catalina Island and San Diego. The brig will return to Dana Point days before the annual Tall Ships Festival kicks off on Friday, September 6 when six other vessels will join in the weekend’s activities.

And when the ships come a sailing in, the Pilgrim crew will be leading the parade.