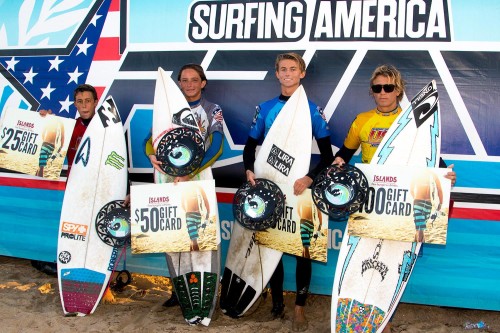 Surfers in Their Prime

Surfing America Prime series invitees took their last shot of the season as accumulating points toward qualifying for the upcoming Surfing America USA Championships in June.

“The kids were stoked on using the four-man priority and the surfing was top-notch once again… a perfect finish to another stellar year for Surfing America Prime. Next up USA champs at Lowers,” said Ryan Simmons, Surfing America junior team coach and Prime series announcer.

Local surfers took nine of 20 podium spots at the event. Standouts included Colt Ward of San Clemente, who took his fourth win of the year in the Boys U18 division. With two of the six series event scores dropped, Ward’s turned in the perfect season. Conner Dand (San Clemente) was runner-up in the division. In Girls U18, San Clementeans Samantha Sibley and Malia Osterkamp claimed the third and fourth spots, respectively.  Sibley was a double finalist also taking the No. 3 spot in Girls U16, behind runner-up Bethany Zelasko of Dana Point. Three of four places in Boys U14 were earned by San Clemente surfers—Crosby Colapinto (second), Kade Matson (third) and Taj Lindblad came in fourth, making his first-ever podium appearance in the Prime series.

Top youth shortboard surfers from across the country will meet at the Surfing America USA Championships, June 16 through 20 at San Onofre State Park, Lower Trestles.  Adult shortboard, longboard and SUP divisions will compete June 12 through 14 at Cardiff Reef.

Prime regular season champions will be crowned at the USA Championships.