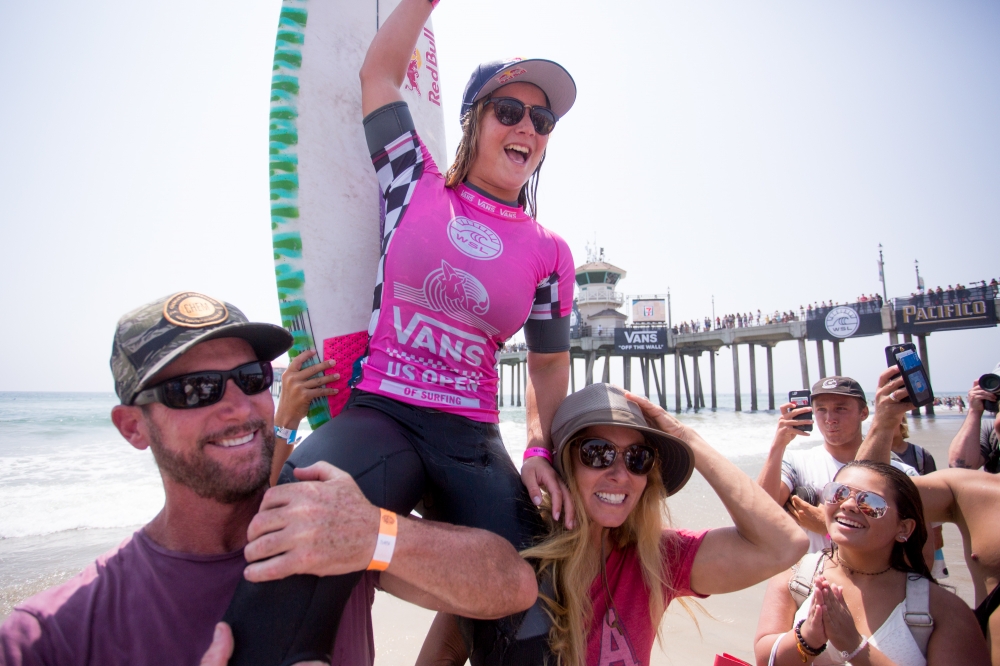 Marks, 14 years old, defended her 2015 US Open Women’s Pro Junior title, and earned 1,000 points towards her ranking on the 2016 Women’s Junior Tour for North America, where she currently holds a No. 5 ranking.

Marks and her family lived in San Clemente for two years, and just moved to San Juan Capistrano. She bounces back and forth between living in Orange County and her hometown in Florida.

Marks told the Dana Point Times that defending her Women’s Pro Junior title is the realization of a goal she’s worked hard to attain.

“It’s one of the biggest accomplishments I’ve made, if not the biggest, and definitely  my favorite win I’ve ever had,” said Marks.

She felt confident going into the competition after winning the US Open Women’s Pro Junior the year prior, and said she tries to treat every event the same.

“I have the same mindset for every event. I know I had to give it my A game, and I give every event my A game. I surfed as strong as I could, and at every event I’m really hungry and always striving to win and do the best,” said Marks.

In 2015, Marks became the youngest woman to surf in a Championship Tour (CT) event at 13 years old after she earned a wildcard spot to surf in the Swatch Women’s Pro at Lower Trestles.

This week, she will be traveling to Bali with Surfing Magazine and other groms for what normally is an all-boy’s surfing trip called Grom Games. Not only is Bali one of Marks’ favorite places to surf, she is the only female surfer to attend the trip.

Locals Fare Well in US Open of Surfing

Cole Houshmand, Griffin Colapinto and Kei Kobayashi made it to the quarterfinals event last week.

With tough competition for these groms, only Kobayashi advanced into the semifinals where he placed third and was unable to make it to the finals event.

Houshmand said this was his first year competing in the US Open, and that it was “a big learning experience for me, overall a really good experience, and the biggest contest I’ve ever done.”

He made it far in the Men’s Junior competition, advanced through the Men’s QS Trials and competed in Men’s QS first round but was unable to advance further.

“It was amazing, just seeing how many people were down there, the whole crowd, and being surrounded by the top guys, I was just taking it step by step” said Houshmand when the Dana Point Times asked about his experience surfing in US Open this year.

Meanwhile, Kade Matson and Crosby Colapinto surfed well, but fell just short of advancing into Round 3.

Izzi Gomez and Samantha Sibley competed against each other in Round 1 Heat 1, with only Sibley advancing into Round 2.

In the semifinals, Marks took first in Heat 1, while Zelasko and Pinkerton competed against each another in Heat 2. Pinkerton took third right behind Zelasko who placed second and advanced into the Finals to compete against Marks.

Marks took first in the finals and Zelasko placed fourth.

Tanner and Patrick Gudauskas, Kolohe Andino and Evan Geiselman were eliminated in Round 3. Griffin Colapinto and Nathan Yeomans advanced into Round 4.

Yeomans was the only San Clemente surfer to make it through Round 4 and into Round 5, where he competed in a two-man heat.  He took on Adriano de Souza, the former 2015 CT Champ, and placed second, finishing only 0.13 points behind de Souza.

Rozunko and Nieblas competed in the same Quarter-Finals heat,  with Rozunko placing in fourth and Nieblas taking third. Witt placed in second during the Quarters and advanced into the Semi-Finals.

Witt placed in second in the Semi-Finals just behind Troy Mothershead, who hails from San Clemente and currently lives in Ventura. In the Finals event, Witt finished with a second place win.