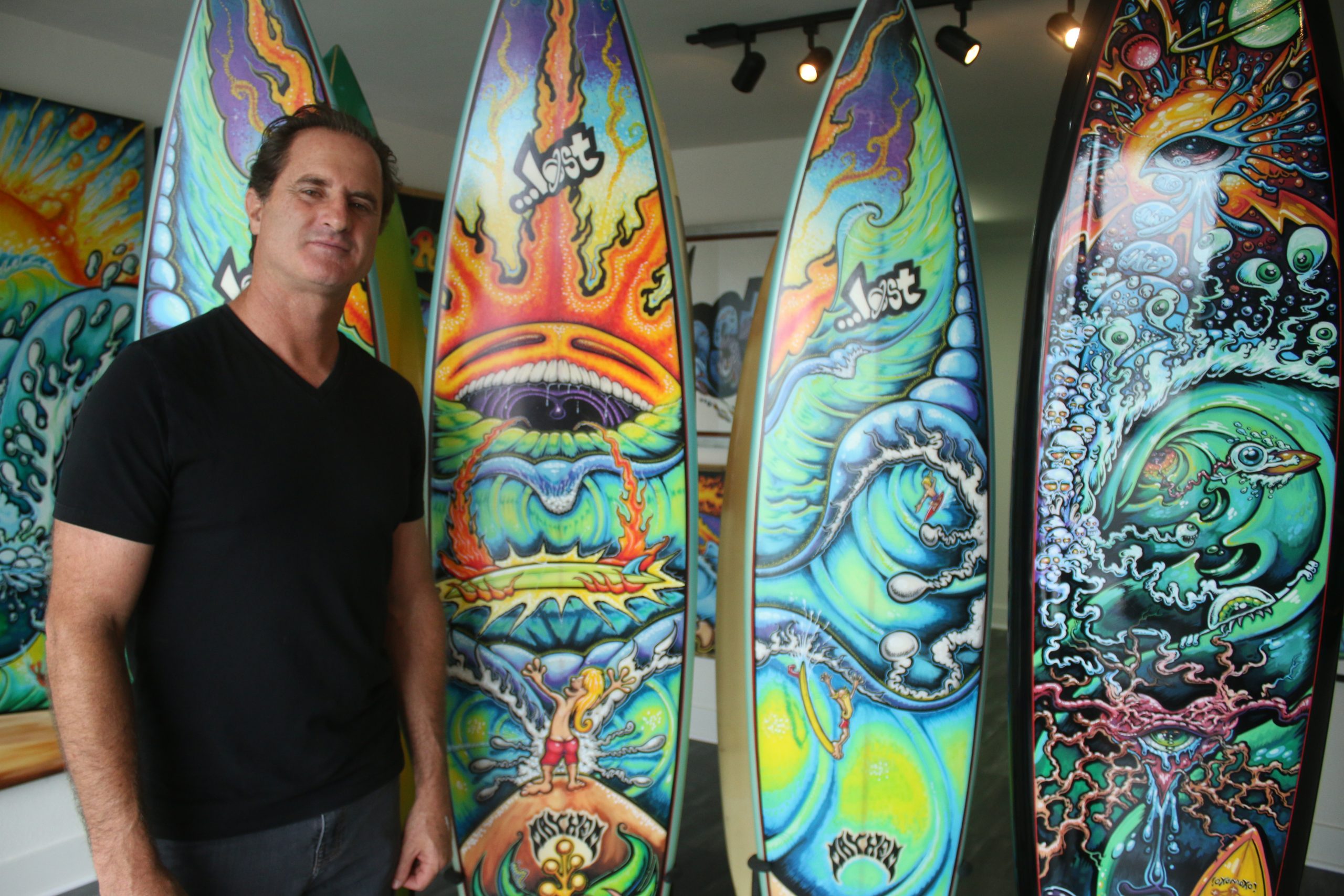 UPDATE (4:20 p.m., Dec. 7): In an email from Maria on Tuesday, Dec. 7, she explained that the family was trying to have Drew transferred to another hospital as Mission Hospital “has gone as far as they can with him.”

“The concern is he may not be accepted for various reasons (age or they are full) and this could be a death sentence for him,” Maria said in the email. “We are praying one of the hospitals he has been referred to will accept him—UCLA, UCSD, Cedar Sinai or USC.”

In 2001, my eventual wife and I were looking for an apartment to rent in San Clemente. By happenstance, we settled in a tiny little upstairs bungalow next door to Drew and Maria Brophy. Their son, Dylan, was just a little guy at the time. Our shared passion for surfing immediately brought us together.

I’d seen Drew’s art everywhere, and by this time, he’d become one of the most recognizable surf artists in the business. His collaboration with Matt Biolos and Lost was literally world-famous.

On sunny days, Drew would spread out his materials in his backyard, and we had the amazing fortune to be able to watch him create. There’s something special about watching an artist at work, especially watching Drew do his thing.

Drew’s imagination is inspired by what he experiences in the water. He’s a mad dog, charging big waves everywhere from Mexico to Tahiti. He’s one of those guys who just lives for it—a true surfer’s surfer.

Sadly, our friend Drew is in the fight of his life. In early November, he contracted COVID-19 and has been hospitalized as a result. During this holiday season, when so many loved ones are on our minds, I’ve been thinking a lot about Drew, Maria and Dylan, and sending them lots of positive healing energy.

Drew’s brother, James Brophy, has set up a GoFundMe campaign to help cover the medical expenses. According to James, Drew has been in the ICU and was placed on a ventilator.

“Drew is grateful for the expert care he is receiving and has no doubt he will recover fully,” writes his brother. “He asks that only positive thoughts of good health and healing be sent out into the universe to strengthen his resolve to be healed and return to good health. He needs your help to stay strong and continue the fight. Your positive intentions are very powerful and will be received.”

For those who haven’t enjoyed Drew’s company, he grew up in Myrtle Beach, South Carolina, in the 1980s. Insisting he “had to get out,” he chased his surfing dreams to Hawaii.

“I went to the North Shore to paint boards and surf Pipeline. That was the dream, but like anything, I guess, that wasn’t the reality,” Drew told me in a 2018 interview. “I got some work painting boards, mostly airbrushing, because nobody was really using the Posca paint pens.”

“I got to a point where I was painting the top guys’ boards. Some big-name guy would come in, explain what he wanted, and I’d paint his board, but getting paid was a different story,” Drew added in the interview. “I’d be out at Pipeline with all these guys, and they treated me like (expletive).”

Disenchanted with the trajectory of his career, Drew hit the reset button and relocated to San Clemente. After all, if you can’t have Pipe in your backyard, Lowers is a pretty good second option.

“I rented this garage, and that’s where I lived when I first moved to California. I met Matt (Biolos), and we hit it off right away,” Drew continued. “This would have been around ’95 or ’96.”

Together, Drew, Biolos and Mike Reola made magic happen with Lost. The surfboard company ushered in an era in radical, high-performance surfing. And Drew, armed with his Japanese Posca paint pens, promptly changed the way surfboards were brought to life.

“Airbrushing is more technical; I knew that these pens would allow for a lot more freedom and creativity. I knew there was opportunity there,” Drew said. “We started putting color and fun into the art. We’d do anything we wanted on a board. There weren’t any rules.”

Today, Drew and Maria have built an incredible business around Drew’s art. They’ve traveled the world together and been able to turn their collective surfing dream into a flourishing reality.

Hopefully, we’ll see Drew back in the water sometime soon. Until then, I’ll be sending love and light to the Brophy family, and all those going through some tough times right now.