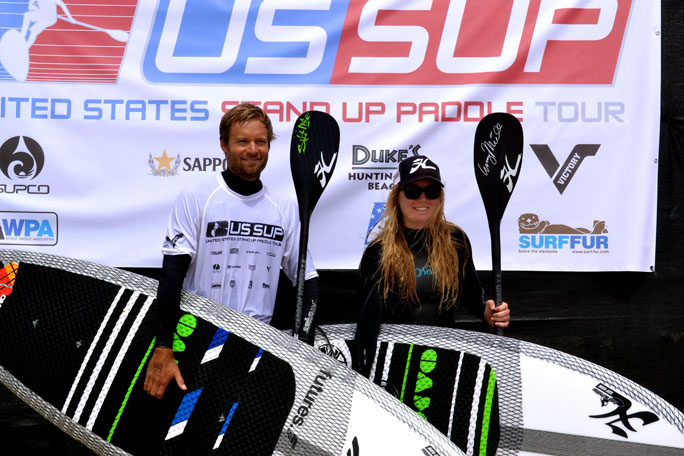 Several local competitors found success at the first stop of the inaugural US SUP Tour, April 12 to14 in Huntington Beach. Among the local contingent, San Clemente’s Colin McPhillips and Emmy Merrill both rallied to first place finishes in Pro SUP Surf competition.

“It was honored to take a win at this first event. The contest as a whole, set a great precedent for how the rest of the season will go,” said 2012 women’s world SUP surfing champion Merrill. “It was a first time for the competition but it was so successful that I think it got things off the ground nicely. I am very excited for the remaining contests and next season as well. It was a really fun and well run event. I hope it prompts more women to compete.”

Since a low number of female athletes meant that the women’s division would go straight to final, Merrill competed with the men where she made it to the quarterfinals.

On fellow competitor McPhillips, Merrill said, “It is crazy how great Colin surfs. He always pushes the limits and is one of the professionals really responsible for advancing the sport. I think he’s the Tom Curren of stand-up paddle surfing.”

The event was the first of three stops on the new stand-up paddle competition tour that will serve as the qualifying series for athletes to compete at the International Surfing Association World SUP and Paddleboard Championship as members of the USA Surf Team. Competition includes both SUP surfing and SUP racing events.

The tour, organized by Surfing America team coach Ian Cairns, is just what the sport of stand-up paddling needs, he said. He equates SUP now to what was happening with surfing in the early 1970s when the establishment of an official tour and the consistency of high caliber events led to tremendous growth in the sport. With the support of Surfing America, the official ISA-sanctioned governing body in the U.S., well-produced events with Association of Surfing Professionals judging and computer scoring and the assistance of World Paddle Association Director Byron Kurt, he is confident the tour will fill the void nicely. A $5 portion of each entry fee will also help the team make the trip to the ISA World Championships in 2014 after having to skip this year’s event due to financial constraints.

Find out more about the tour at www.ussuptour.com.