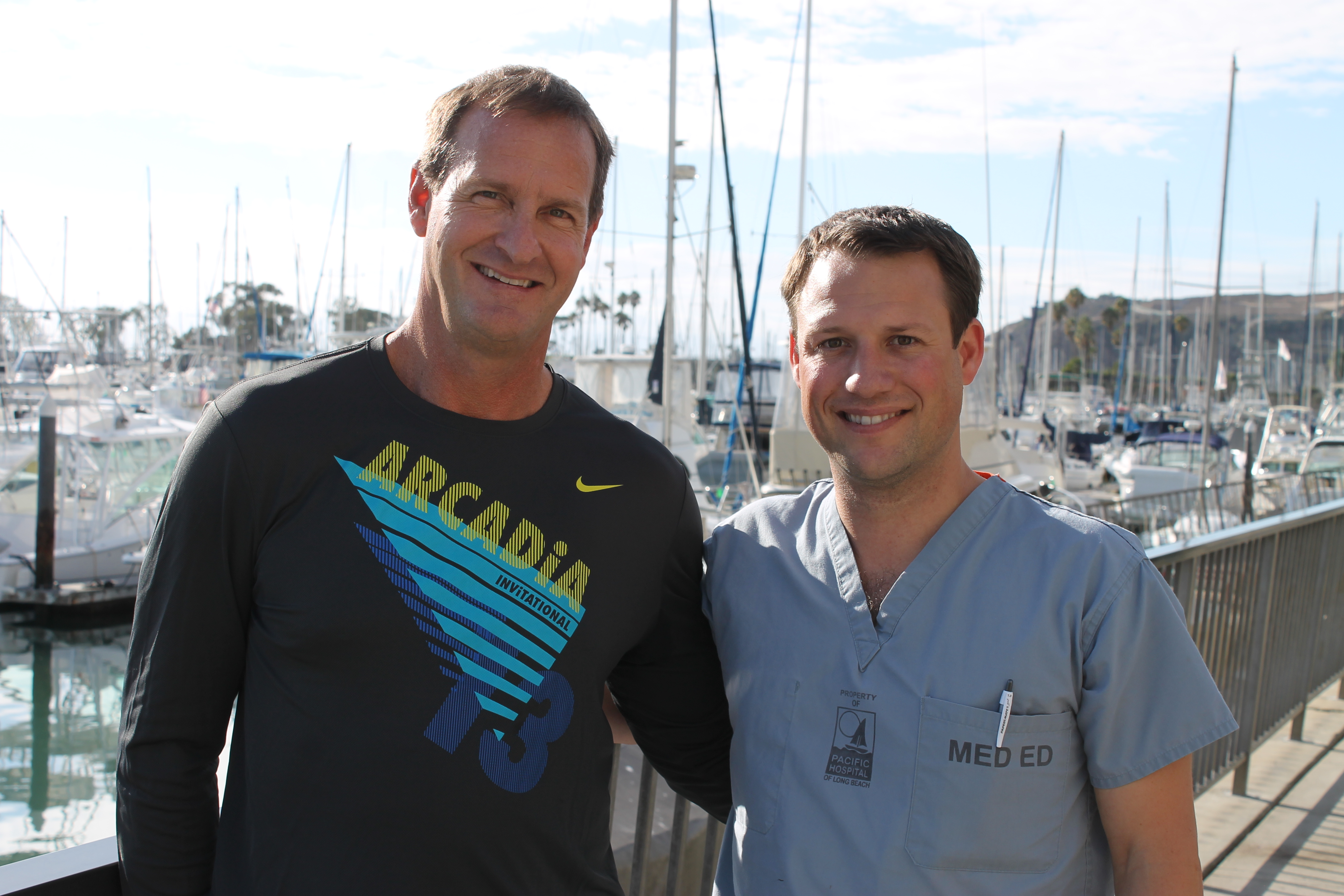 Last Thanksgiving eve, Steve VandenBerg did what he and his family traditionally do, they carb-load at night in preparation for the next day’s Dana Point Turkey Trot.

Nothing was out of the ordinary. The VandenBerg family stood at the event’s starting line as one, and embarked on the same 10K run they’ve participated in the last six, or more, years. This year, VandenBerg and daughter Kylie were out in front, with sons David, John and wife Brenda rounding out their team. Kylie took the early lead, pacing her father by a few hundred yards. The father-daughter duo high-fived as Kylie rounded Island Drive for the finish line.

When VandenBerg approached the same turn on his last leg of the run he collapsed.

“When I look back at it, it’s like I got up really early Thursday morning for a jog and then took a three day nap,” VandenBerg said. “The next thing I remember is waking up Saturday, looking up and wondering where I was.”

“It felt like I was living in a recurring dream,” he said.

The longtime San Juan Capistrano resident said he felt fine that morning, and didn’t experience any different stresses on his body than what he would feel during a regular workout. But that morning, VandenBerg, the Pacific regional manager of Kraft Foods Group, suffered a heart attack.

Heart disease is the leading killer of men and women in the nation, according to the Centers for Disease Control and Prevention. The CDC says more than 700,000 Americans suffer a heart attack every year, with nearly 600,000 people dying from heart disease, accounting for one in four deaths in the nation. Heart disease refers to many heart conditions, but the most prevalent is known as coronary heart (or artery) disease, where plaque builds up in arteries supplying blood to the heart.

Attacks occur when an artery transporting oxygenated blood to an area of the heart is blocked, and could lead to cardiac arrest. An estimated 360,000 out-of-hospital cardiac arrests occur in the United States each year, principally involving middle-aged men. Those hit by an arrest, which can stop the heart from beating without warning, only have a 9.5-percent survival rate, according to the American Heart Association.

Patients, like VandenBerg, can survive if given cardiopulmonary resuscitation (CPR) immediately, keeping oxygenated blood flowing to the brain and other vital organs, and have their hearts returned to a normal rhythm with a jolt from a defibrillator.

“If this had happened anywhere else, I don’t think I would be here today,” VandenBerg said. “Having people who knew what they were doing, and getting compressions going instantaneously, kept me alive.”

Chamber Not Taking Any Chances

The Dana Point Chamber of Commerce has added medical personnel throughout the course, equipped with and trained on using an automated external defibrillator, said Vickie McMurchie, senior operations manager of the chamber. AEDs are portable devices that use electric therapy to stop an irregular heartbeat, allowing the heart to restore an operational rhythm.

The added support will be set up on both the land and island sides of the Harbor to better assist racers, she said.

“Our number one concern is the safety of our runners,” McMurchie said.

By the time Mike Farrell, a physician at College Medical Center in Long Beach and a south Orange County native, came up on VandenBerg, racers had already begun working on her. Farrell jumped in performing CPR before on-site medical crews arrived.

VandenBerg had no pulse, but had a faint rhythm, Farrell said. With two shocks from an AED delivered by golf cart, VandenBerg’s heart returned to a normal beat. He had a strong pulse when the ambulance arrived, Farrell said. VandenBerg was transported to Mission Hospital where he awoke three days later, in a state of confusion.

“‘Steve you are in the hospital, you had a heart attack during the Turkey Trot on Thursday,’” he recalled his wife saying. “For me it was a long nap, but my family experienced all the emotions.”

VandenBerg’s family, absent his daughter who was ahead in the run, came upon him as racers worked to keep him alive.

On Thanksgiving Day, VandenBerg received two stents in his heart, unblocking one artery, his right coronary, which was 95 percent blocked. Days later he would receive a third, as doctor’s discovered a 75-percent blockage in his left descending artery, known as the “widow-maker.”

“When you share a story like this, people always ask, ‘Did you see the bright light?’” VandenBerg said. “If I did, I don’t remember it.”

“I always tell people to live every day, because you just never know,” he said. “I’ve lived a full life already. It is all just bonus time now. ”

Giving Thanks and Returning to the Race

After two months of soreness from cracked ribs and surgeries, and nearly one year of building up strength and returning to his normal workouts, VandenBerg is set to tackle the Turkey Trot 10K once again. With his family by his side—and a pacemaker and defibrillator implanted in his chest—VandenBerg will take to the course Thanksgiving morning amongst more than 12,000 racers in the 36th annual run. VandenBerg said he hopes to meet and thank all who helped him last year.

“I know that the positive energy of the thousands of people that ran by me and all of the prayers from them, no matter who they were praying to, definitely had an effect on my recovery,” VandenBerg said.