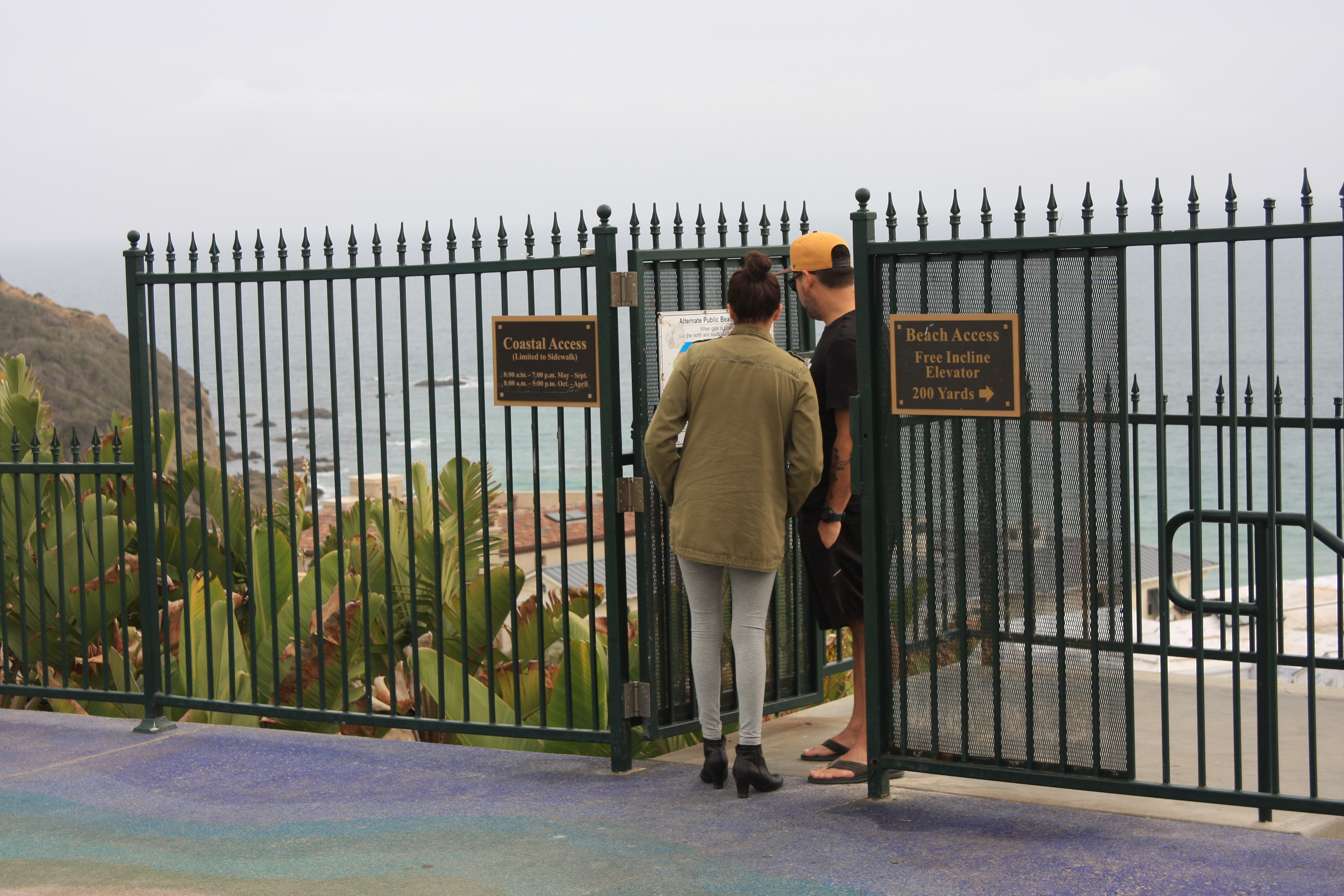 Years of legal battles over access gates at the two of five paths to Dana Strand Beach in Dana Point that pass through a high-dollar, gated neighborhood may come to an end this month.

California Coastal Commission staff is recommending the commission issue a settlement agreement, ending six years of litigation over gates and nighttime closure hours at the Mid-Strand and Central-Strand access ways, leading from Strand Vista Park down to Strand Beach. The commission will consider the agreement at its April 15 meeting.

“We will support this settlement agreement for signature at the April Coastal Commission hearing, and, if passed, consider it a victory for our long-fought battle for beach access at Dana Point Strands Beach,” said Angela Howe, Surfrider Foundation legal director in a statement.

According to the Coastal Commission staff report, the Settlement Agreement and Settlement Cease and Desist Order, signed with the city of Dana Point on March 30, is the result of four months of negotiations between the city and commission staff to resolve the matter amicably.

Adoption of the agreement would end pending litigation between the Coastal Commission and the city, as well as a Surfrider v. City of Dana Point case and resolve the commission’s Nov. 3, 2015, Notification of Intent to Commence Cease and Desist Order and Administrative Civil Penalties Proceedings (NOI), ordering the gates open and closure hours removed.

The city responded to the November 2015 NOI by offering a compromise, to change hours to from one hour before sunrise to one hour after sunset. The offer was rejected by the commission and the city removed all closure hours at the two gates, which have since been locked open.

Despite the rejection, City Council unanimously directed city staff to continue efforts to work with the commission to find a compromise that would end litigation.

“I applaud the Coastal Commission for working so closely with the city to resolve this once and for all,” said City Manager Doug Chotkevys. “It is important to note that the majority of our current City Council had nothing to do with the Headlands and one of their first directives to me was to get this behind us and to develop a good working relationship with the commission.”

The city disagreed, issuing an emergency nuisance abatement ordinance in 2010 it said gave the city right to set hours as a public safety/crime prevention measure. And so began the lengthy string of lawsuits pitting the Coastal Commission and Surfrider Foundation against the city. The city would eventually lose the battle in court. In August 2015, during the final of four cases, San Diego Superior Court Judge Randa Trapp ruled the city’s 2010 nuisance abatement ordinance was an illegal attempt at circumventing Coastal Act requirements.

During the battle, citizens opposed to the city’s fight to keep the gates, expressed not only anger at what they perceived as hindered public beach access but also the belief that the city was pursuing the action for the benefit of Headlands Reserve LLC developer Sanford Edward and criticized the associated legal spending.

A public records request in March showed a total billing for legal fees associated with the matter at just over $947,100.

A separate records request pulled April 5, confirmed that the city has billed Headlands Reserve for reimbursement of legal fees in the amount of approximately $949,100. Headlands Reserve has paid just over $635,350, leaving a balance of about $313,750 yet to collect.

While city staff has acknowledged that gates and closure hours were undoubtedly of benefit to the developer’s home sales, it continued to maintain the move was intended to balance homeowners’ rights and public safety. The city also held that development of the area dramatically increased public access to the beach, which was nearly inaccessible before.

The other three access ways include the North Stairway and South Switchback trails, ungated and open 24/7, and a funicular (inclined elevator) with the gated Mid-Strand and Central Strand paths in between. The parking lot at Strand Vista Park stretches the entire area between the north and south pathways and the beach below is approximately 700 yards in length.

“Dana Point is committed to ensuring coastal access for California residents and all visitors of Dana Point,” Chotkevys said. “That is why it required that Strand Beach, previously a private beach, be made a public beach as part of its approval of the Headlands development. Moreover, it required five access points be developed for the public to access Strand Beach, including a funicular that operates at no charge to the public. The current dispute only relates to the hours of operation of two of these access points, and it is important to understand that Strand Beach has been available to the public at all times when it is open ever since the council required that it be dedicated for public use.”

The agreement also includes $300,000 in other mitigation measures, which includes additional signage, bike racks, benches, enhanced trails and other improvements to increase coastal access. An agreement by the city to ensure that disadvantaged students from Title 1 schools have better access to ocean education opportunities via a $25,000 yearly contribution to the Ocean Institute is also written into the settlement.

“The electorate gave us this City Council and this City Council was unanimous in its resolve to end the litigation in such a way that it set the table for a very collaborative relationship with the Coastal Commission.”