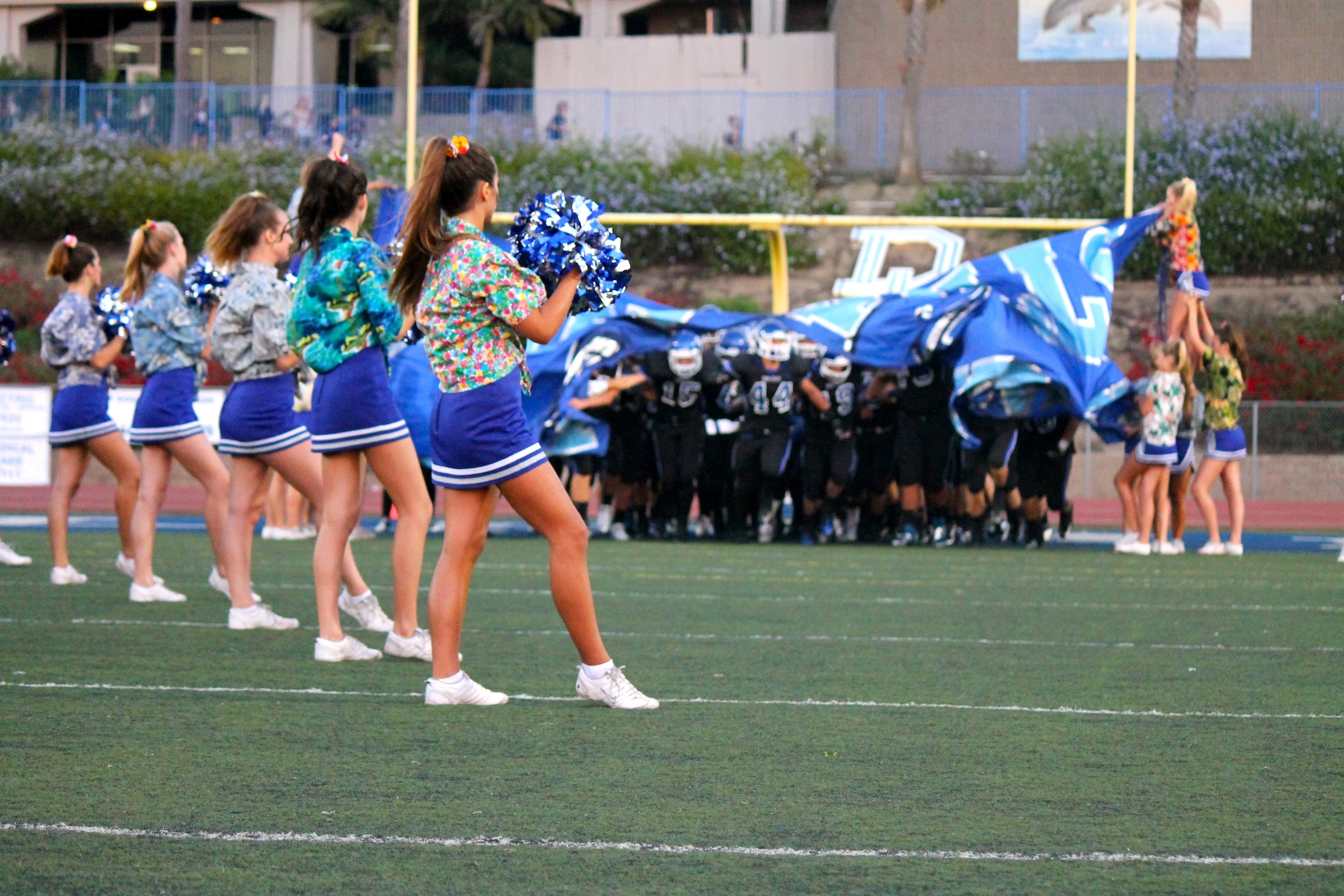 It was an emotional game. It was a rivalry game. And in the end the game proved to be a signature win for the Dana Hills football team as they prevailed over visiting San Clemente in a 38-13 nonleague victory on September 12.

The Tritons (2-1) took the field with heavy hearts. It had only been four days since former Tritons standout and UCLA wide receiver Nick Pasquale was struck by a car and killed in San Clemente. The Pasquale family served as honorary captains for the team.

The win for the Dolphins (1-2) marked the first time they have defeated San Clemente since 2009 and following the final whistle, the Dana Hills student section poured out onto the field in celebration.

The Tritons and Dolphins (1-2) both exchanged scoring drives in the first quarter.

San Clemente junior quarterback Sam Darnold engineered an effective 10 play 80-yard scoring drive that ended with Darnold rushing it in from three yards out. A missed point after attempt put the Tritons up 6-0 early.

The Dolphins would use a healthy dose of senior running back Justin Scott all night long and on his first play from scrimmage he burst for a 37-yard run that set up a 23-yard scoring pass play between senior quarterback Mac Vail and wide-out Sean Schulte that gave the Dolphins a one-point lead. Scott had another big run in the second quarter, this time on a 54-yard breaker that appeared to be a touchdown but was ruled down at the three-yard line. A Dolphins penalty pushed it back ten yards further. Senior fullback Andrew Dunn would pound the ball in three plays later.

Darnold then connected with senior Collin Zines for a 23-yard passing touchdown, which left the Tritons trailing 13-14 heading into the half. It had all the makings of a dramatic finish, but Darnold would not take another snap for the Tritons.

After his scoring strike to Zines, Darnold looked visibly hindered after the play and did not participate in the end zone celebration. According to Tritons head coach Jaime Ortiz, Darnold suffered an ankle sprain that sidelined him for the rest of the game. At the half Darnold had thrown for 126 yards and a touchdown while taking seven carries for 69 yards and another score.

The task of keeping the ship afloat fell to backup Loren Applegate, who struggled to find a rhythm against the Dolphins defensive front seven. The Dolphins defense exploded for two interceptions and a sack in the second half, bringing the Tritons offense to a grinding halt. The Tritons were held to just four total yards of offense and failed to pick up a first down in the final 24 minutes of play.

One of the Dolphins two interceptions was made by senior Michael Voegeler, who returned the errant pass 31 yards for a touchdown to give the Dolphins a comfortable 28-13 lead just before the fourth quarter. Junior Brett Bill would also pick off a pass for Dana Hills.

“The defense really stepped up … having Darnold go down was huge because of what he does for San Clemente offensively … he’s a phenomenal player and we tried to contain him enough where he wouldn’t break a big play on us,” Dana Hills head coach Todd Rusinkovich said. “We really tightened up on defense and played well in the second half.”

– Mac Vail completed 10 of 18 passes for 171 yards, two touchdowns and one interception.

– The Dolphins defensive line had a solid all around game. Seniors Scott Aiello, Justin Stafford and Adam Page all bottled up what had been a potent Tritons running game. The Dolphins linebackers, led by Hank White also made a big impact.