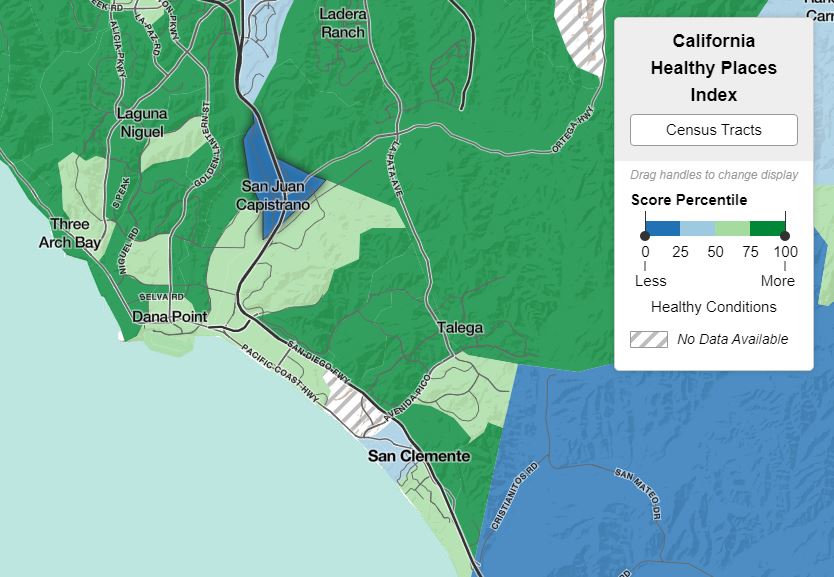 By Zach Cavanagh While coronavirus numbers in Orange County have broadly stabilized in recent months, California has made an effort to monitor the impact of the virus in the state’s hardest-hit communities since the beginning of October. To address the higher rates of COVID-19’s impact on low-income, Black, Latinx and Pacific Islander communities in the state, counties statewide have been tracked on a new health equity metric—a third element added to the state’s color-coded, four-tiered coronavirus tracking system on Oct. 6. The state had previously tracked daily new cases per 100,000 people and testing positivity rate as the broad metrics for counties’ reopening measures. The health equity metric tracks testing positivity specifically in the state’s lower-income and more racially and ethnically diverse neighborhoods. Based on COVID-19 data from the county, Hispanics and the Latinx community have contracted the virus at a higher rate than all other races and ethnicities. While Hispanics and Latinos make up just over one-third, or 35%, of the overall population in Orange County, they account for about 47.8% of all cases since the pandemic began, and more than 43.5% of all deaths. Among the Asian and White demographics, which account for 21.1% and 38.6% of county’s population, respectively, they together only represent 33.93% of all cases and 51.67% of county’s fatalities from the virus. In the state’s latest numbers released on Tuesday, Oct. 20, Orange County’s health equity positivity improved to 5.6% from 6.5%, with the countywide positivity rate falling back to 3.2% from 3.5%. The county’s daily new cases stayed level at 4.6 per 100,000. Orange County remains in the state’s second-highest risk tier—the red “substantial” tier. The neighborhoods selected for the health equity rate have been identified as census tracts in the lower 25% of the California Healthy Places Index (HPI), which monitors factors such as economy, education, transportation, neighborhood and housing conditions, access to health care and racial and ethnic makeup. In Orange County, the majority of these tracts are found in Santa Ana, Anaheim, Garden Grove, Stanton and Buena Park, with others scattered in Fullerton, Placentia, Westminster, Huntington Beach and Costa Mesa. In the South Orange County cities of Dana Point, San Clemente and San Juan Capistrano, the downtown San Juan tract along the Camino Capistrano corridor, from San Juan Creek in the south to just north of Junipero Serra Road, is the only neighborhood that falls in the lower 25% to be monitored. According to the HPI, the downtown San Juan tract is a majority 73.2% Latino and 23.2% White, with smaller numbers for Asian (1.6%), Native Americans (0.8%) and Blacks (0.4%). The tract scores well in neighborhood conditions and clean environment metrics, but it is near the bottom in health care access and housing conditions. The neighborhood also scores in the lower one-quarter percentile in education, with a low number of preschool enrollees and 14.6% of people over 25 years old with a bachelor’s degree or higher. Of the three South Orange County cities, San Juan Capistrano has had the highest number of COVID-19 cases and deaths despite having roughly half the population of San Clemente and nearly the same population as Dana Point. Just in the past 30 days, San Juan Capistrano has had 124 cases and two deaths, compared to 82 cases and one death in San Clemente and 35 cases and no deaths in Dana Point. When it comes to the state’s coronavirus monitoring numbers, Orange County has been behind on its health equity number over the first three reporting weeks of October, but it is improving. On Oct. 6, Orange County opened with 6.6% health equity testing positivity compared to the countywide 3.2% testing positivity. On Oct. 13, the county showed a 6.5% health equity number, with a 3.5% testing positivity countywide. As mentioned, on Tuesday, Orange County’s health equity rate fell to 5.6%, with the countywide positivity rate dropping to 3.2%. For reference, in neighboring counties in the most restrictive purple “widespread” risk tier, Los Angeles County has a 5.9% health equity rate and a 3.4% positivity rate; San Bernardino County has an 8.5% health equity rate and a 6.2% positivity rate; and Riverside County has a 6.9% health equity rate and a 5.2% positivity rate. San Diego County, which is in the red tier, has a 5.5% health equity rate and a 3.3% positivity rate. Orange County remains in the red tier right at the edge of the orange “moderate” tier. The testing positivity is below the 4.9% threshold, but the county is just outside the 5.2% health equity threshold and the mark of 3.9 daily new cases per 100,000. To move down a tier, a county must maintain numbers at the lower tier’s level for two consecutive weeks. While the health equity rate can be another barrier to tier movement, it can also speed up tier movement if the number falls. If the county’s testing positivity and health equity rate meet the lower threshold for two consecutive weeks, the county could move down to the next tier, as long as the daily case rate is stable or declining. Shawn Raymundo contributed to this report.