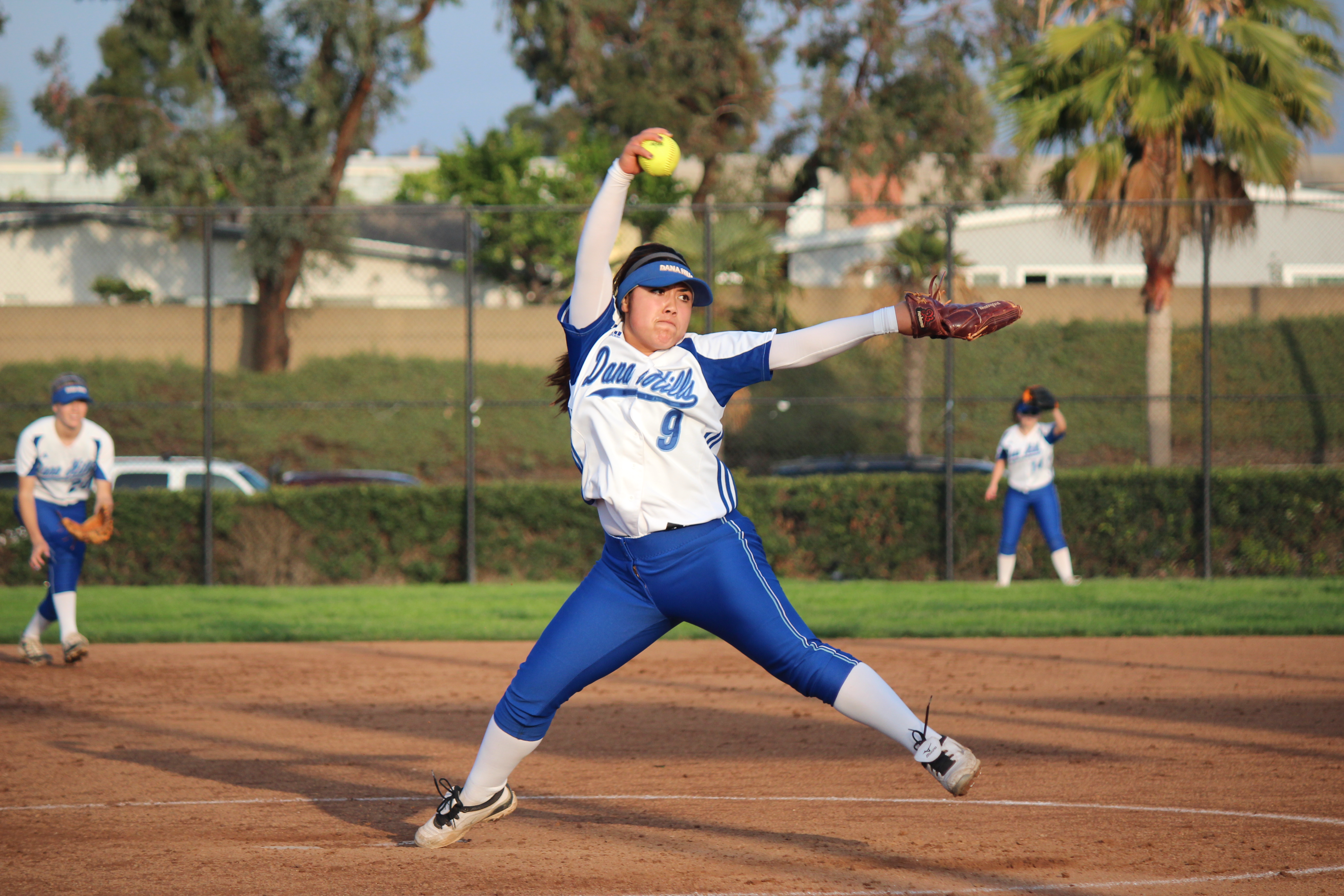 Follow us on Twitter @SouthOCsports all season long for in-game updates, news and more on all the Dana Hills High School spring sports teams.

First-year head coach Brandon Cosenza admits to walking into a good situation with this year’s Dana Hills softball team. The Dolphins return their top two starting pitchers as well as the entire starting infield. The team finished in a tie for second-place in the South Coast League last year and got hot in the postseason, making it to the CIF-SS Division 2 quarterfinals.

With so many returning players, including three Division 1 commits, the Dolphins are in good position to challenge Mission Viejo for the top spot in league.

Seniors Olivia Baltazar and Lindsey Cassidy make up the one-two punch in the pitching rotation. Baltazar made her starting pitching debut on March 5 against Woodbridge and turned in a complete game, nine strikeout effort in an 8-5 win.

Table setters in the lineup include speedsters Sami Williams (second base) and Madison Killebrew (shortstop). Senior first baseman and University of Virginia commit Danielle Ingraham will provide the power in the cleanup spot.

The Dana Hills baseball team has made defense and pitching their trademark in recent years. The Dolphins ability play small ball at the plate, get outs in the field and have their starters pitch deep into games put Dana Hills in contests that were decided by one or two runs 16 times last year. The team’s overall record in those games turned out to be 7-9, which head coach Tom Faris chalked up to bad luck.

The 2014 version of the Dolphins is cast in the same mold, with their strength revolving around two top-of-the-rotation pitchers and a stout defense.

Senior right-handed pitcher Louis Raymond (2.35 ERA in 2013) will be the team’s No. 1 starter with junior Marrick Crouse behind him. Behind Raymond and Crouse, Faris plans on using a mix of positional players to fill out the rotation.

The Dolphins are no stranger to hit-and-runs and bunts, which will make team speed integral to their success. Top of the order hitters like junior Luke Williams, a versatile two-sport athlete, will set the table for hitters like junior Jay Schuyler, the team’s returning first baseman. Schuyler hit .303 with 15 RBIs in 2013.

“I think speed is going to be a key factor in what we do. If the kids buy into reading the ball in the dirt, dragging, pushing, hitting, running, stealing and everything that we do here, we’re going to do real well,” Faris said.

The Dana Hills girls track and field team’s recipe for success in recent years has been to stock up on talent in the field events. So far, it’s been paying off for the Dolphins, who in 2013 won the South Coast League title for an eighth consecutive year.

When assessing this year’s squad, head coach Ryan Crane does not see the team’s usual numbers in terms of quantity, but he does see quality.

Sophomore pole vaulter Claire Kao will be a key figure in the Dolphins field events. Kao set a school record last year when she cleared the 12-4 mark.

Senior Michaela King (sprints, hurdles) is already making an impact. On March 5, King posted a time of 14.91 in the 100-meter hurdles in an exhibition meet against Great Oak, which, according to PrepCalTrack.com, is currently the fastest time in the state under any conditions.

Junior Kimiko Tanaka and Chole Deol will add depth to the Dolphins relay and mid-distance teams.

Much of the Dolphins runners who were on the successful cross country team in the fall make up a deep and talented distance running team for track and field in the spring.

Standout sophomore Jake Ogden, junior Mason Coppi and seniors Gavin Diem and Wyler Svoboda were members of the cross country team that finished third in the CIF State Championships and will compete in distance events like the 800, 1,600 and 3,200.

Jacob Harbin, who played right guard for the Dolphins football team, threw 48-9 in the shot put at the South Coast League finals last season and according to head coach Craig Dunn, the senior has already bested the 50-foot mark in the offseason.

“We’re pretty well rounded. We think we have a chance, we have a lot of individuals who put in a lot of time in the offseason so we’re excited about this upcoming season,” Dunn said.

It’s no secret that the Dana Hills boys tennis team will be strong at the top of their singles, as long as standout senior Chase Masciorini is there. Masciorini had a stellar 2013 that saw him advance to the quarterfinals of the CIF-SS Individual Championships. In the past three seasons, Masciorini has won the South Coast League title once and finished runner-up twice.

Masciorini has been effective on the court, but head coach Justin Green thinks his efforts off the court are what make him special.

“He’s one of the best leaders I’ve had in our boys program since I’ve been here. He just cares so much about the team,” Green said. “He is our best player, but he works with these other guys and what’s best for them.”

The Dolphins doubles teams are still taking shape in the preseason. The group that was young and new to the varsity game last season returns seniors Jon Alami and Arjun Boddu. –Brian Park contributed to this report

The Dana Hills boys volleyball team will have a different look this year, most noticeably in their size. When they take to the court this season, the Dolphins will lack the size of year’s past, which has made ball control and passing a priority this offseason.

With an emphasis on sharing the ball, the Dolphins can take solace in having senior Eric Matheis, a UCLA commit, at setter. Matheis, who was a standout player for the Dolphins basketball team, is a three-year varsity starter.

“It’s nice having (Matheis) in that position. With him at setter, he makes the other players around him that much better,” head coach Oz Simmons said.

The Dolphins, however, will be without standout senior opposite, and another UCLA commit, Christian Hessenauer, who played an integral role in the Dolphins’ South Coast League championship efforts last year. Simmons declined to comment on Hessenauer’s absence from this year’s team.

Sophomore outside hitter Grady Yould and junior Teddy Fitzgerald will be among the team’s top outside hitters. Fitzgerald (6-foot) and Yould (5-11), who are both two-sport athletes, might be a bit undersized, but Simmons believes this could be a hidden advantage for his team.

“We have to be a small, ball-control oriented team if we’re going to be successful,” Simmons said. “We don’t necessarily have the power other teams do but we hit smart at the outside.”

Last year marked the first time in school history that a Dana Hills girls lacrosse team reached the CIF-SS playoffs. The Dolphins finished third in the Sea View League and advanced to the first round in the postseason tournament.

With momentum on their side, first-year head coach Dori Campbell will attempt to keep the Dolphins on an upward swing.

Campbell said the team benefitted from a large incoming freshman class with prior lacrosse experience, which had not happened before.

One of the freshman standouts is goalie Syd Allison, who Campbell says has quick reflexes and stands strong in goal.

“I think there are a lot of confident players. We had a really successful season for fall ball,” Campbell said. “The connections that they’re making and their trust level is up. They’re not hitting the ground real rusty since playing last spring.”

A slew of sophomores and juniors will lead the Dana Hills boys golf team in 2014, which will be the final group that longtime head coach Phil Wilburton oversees. Wilburton said this season will mark the end to his 28-year coaching career.

The group that will send him out is a young and talented one that features four returning starters.

Sophomore Clay Feagler is the team’s top player and currently holds a 37-stroke scoring average. Wilburton said Feagler, who led the team as a freshman, shows poise at such a young age and has the ability to correct mistakes mid-round.

The bottom of a lineup is always in flux and crucial to a team’s success, and Wilburton is still shuffling and adjusting it to see what works.

The Dolphins opened their season with back to back nonleague losses to San Clemente and Newport Harbor on March 3 and 4, respectively.

The Dolphins finished second at the South Coast League finals last year, which is the highest finish the team has earned in the five years Carlson has been coaching.

Junior Cassidy Humphrey set new records in the 200 and 500 freestyle and will attempt to break the 200 individual medley and 100 butterfly this year.

The Dolphins dive team was a bright spot last year and return captain Lauren Pierce, a Cal Poly San Luis Obispo commit, and San Diego State University commit Nicole Dutton. At the CIF meet last year, the dive team placed all four of their representatives in the top-10, putting Dana Hills in first-place after the diving portion. –Brian Park contributed to this report

The coaching position for the Dana Hills boys lacrosse team became vacant late in the team’s offseason. It was in February, by the time new head coach Chris Iltis landed the job and took the field with the players for the first time. With just under one month to prepare, the Dolphins and Iltis worked quickly on meshing together and learning a new system.

Iltis said the Dolphins were an up-tempo, run-and-gun style team in 2013. Iltis changed that by implementing a more settled system that focuses on ball possession.

“I encourage taking chances but a lot of this game is possession. We’ll be a strong defensive team and strong in the faceoff,” Iltis said.

The Dolphins roster will return several players but took a hit after 13 seniors left to graduation, seven of which were starters.

Returning senior midfielder and co-captain Justin Vasu will anchor the team, according to Iltis. The coach believes Vasu has the best overall athleticism on the team and possesses the vision that an impact midfielder needs.

Last season the Dana Hills boys swim team rode their depth to a convincing South Coast League title. Several players would go on to have successful CIF swim showings. With so many seniors set to graduate, it looked like that signature depth would not be there in 2014. But with a handful of freshman already making an impact, the Dolphins appeared to have solved the issue.

Heimbach mainly competed in the backstroke and individual medley last year, but due to departing seniors, he is converting to sprint freestyle alongside teammates Spencer Likins and Eric Thorpe.

“We’ve got good depth. But I think the freshmen coming in are really helping us … They’re going to help build the program,” Heimbach said. –Brian Park contributed to this report