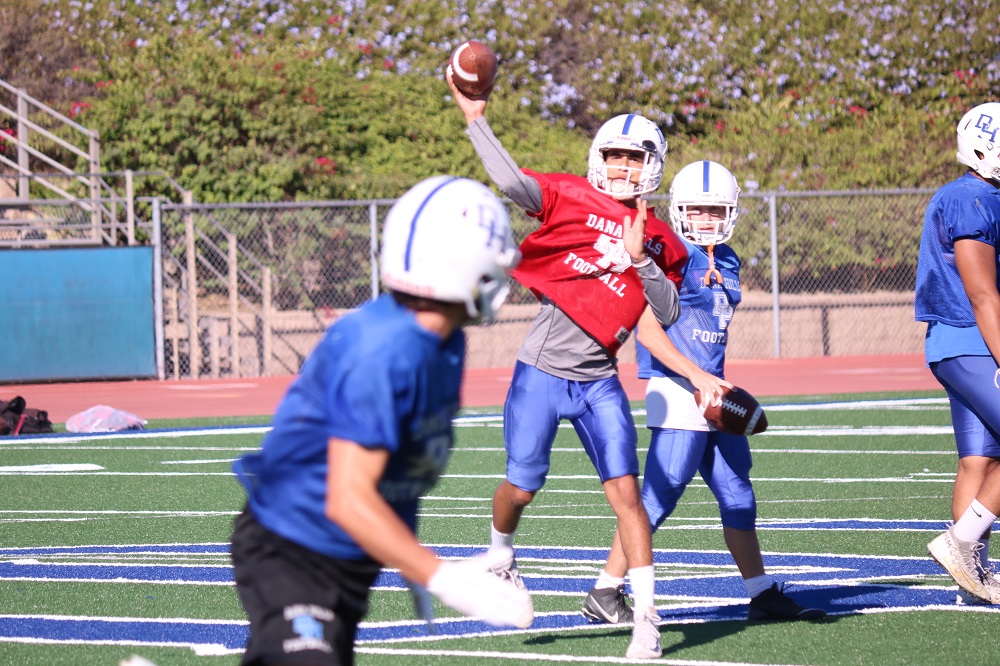 Dana Hills football has a spring in its step.

It’s not the brand-new field turf that’s giving the Dolphins a little more bounce. A 36-point win will do that for you, as Dana Hills (1-1) grabbed its first win of the season against Lincoln of Los Angeles, 46-10, last Friday, Aug. 24.

“Our practices are cleaner,” Dana Hills coach Phil Skinner said. “The discipline is better. It really pays off. The outlook continues to get better every day. I said our whole mantra was about improving every day. We continue to do that. We are a much better team this week than we were last week, and certainly we showed that on the field Friday night.”

One area where that’s evident is the offense as junior quarterback Zackary Saavedra takes control of the spread.

The Dolphins are working with their third offensive scheme in three seasons, but offensive coordinator Curtis Madden’s spread offense has Dana Hills exploring the entire field.

“I think we’re doing pretty solid right now,” Saavedra said. “I was a little shaky in the first game. Second game, we started to get our stuff together and went up and down the field. I think just the spread and how we’re spreading everything out. We’re using the whole field, and just keeping everything together.”

Through two games, Saavedra has completed 14 of 32 passes for 253 yards with three touchdowns and no interceptions. Saavedra completed 50 percent of his passes with two touchdowns against Lincoln.

The field also opened up for senior running back Matthew Lua Mu Poching who ran for 124 yards and three touchdowns on eight carries against Lincoln.

The improvement was noticeable going from the team’s season-opening loss against Los Amigos, 19-17, on Aug. 17 to the blowout of Lincoln.

“That first week, there was some meat left on the table, so to speak,” Skinner said. “(Saavedra) got very excited, and what do quarterbacks do when they’re very excited? They overthrow. Wide open routes, too. Should have been big celebrations and touchdown passes. Nobody more than him wishes that he could’ve pulled those things back and done it over.”

Saavedra is holding himself to that higher standard. Like everyone, he’s continuing to learn in the offense, but he is also embracing his role as a leader.

“I think I need to take a little bit more control,” Saavedra said. “After the first game, I wasn’t really talking to anybody because I was trying to figure out what I was doing wrong. In the second game, I started to figure it out, and I was like, alright, I need to take a little more control and figure out what everybody needs to do, talk them up, and we end up getting the job done.”

Dana Hills will look to remedy its home-opening loss as it welcomes in Saddleback on Friday, Aug. 24. If the Dolphins win and improve to 2-1, Dana Hills would be above .500 at any point in a season for the first time since Nov. 1, 2013.

“It’s all part of the improvement process,” Skinner said. “You can feel it building.”