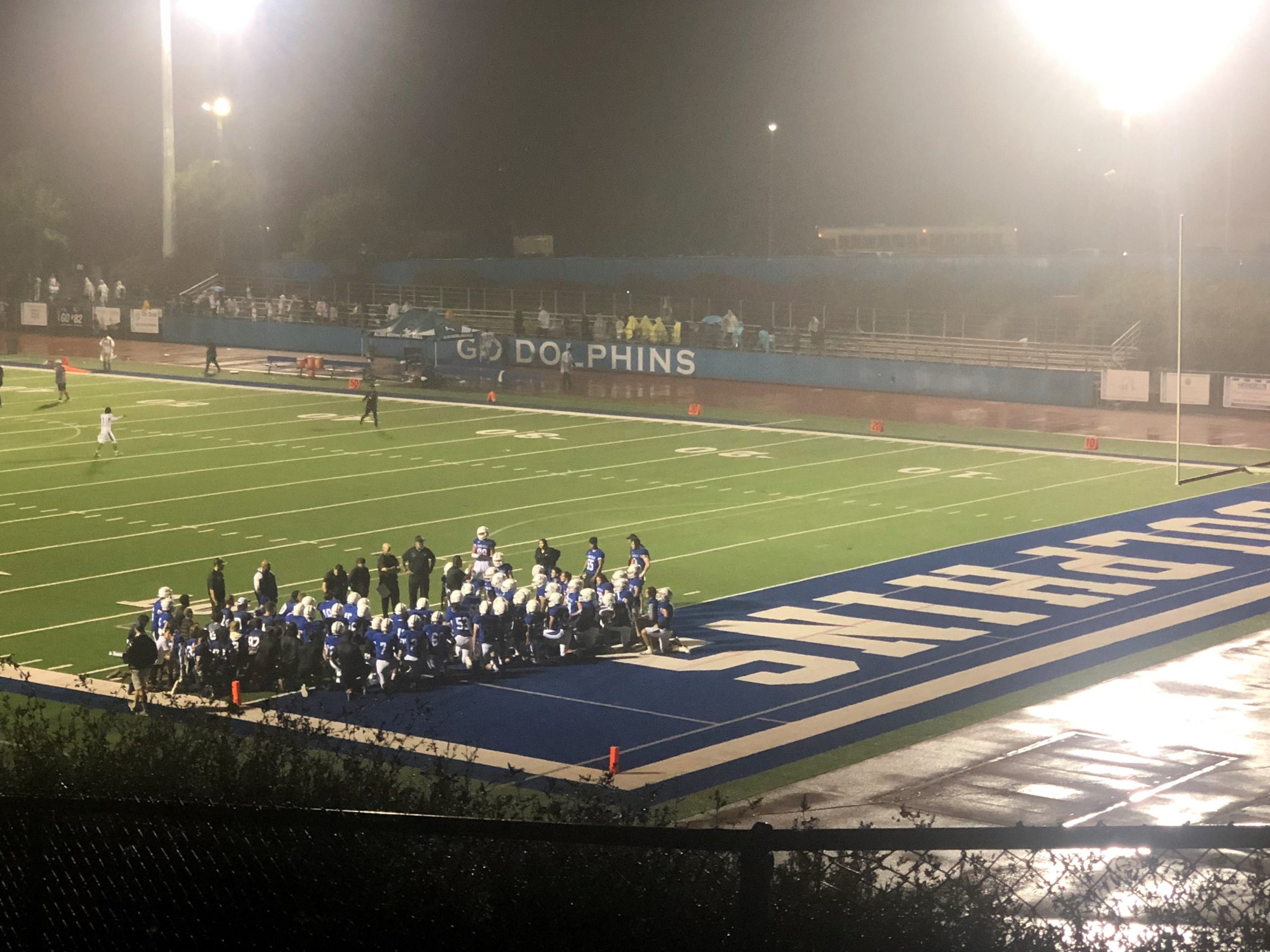 DANA POINT – The Dana Hills football team took its first loss of the season on some self-inflicted wounds in another wild edition of the Aliso Niguel rivalry on Friday night.

As the skies opened up and the rain resumed in a downpour late in the fourth quarter, a bad Dana Hills punt snap and an extremely short kick led to a go-ahead, 12-yard, punt-return touchdown for Aliso Niguel, which was followed up by a 60-yard pick-six on the ensuing drive to ice the game, 38-24, on Friday, Sept. 9 at Dana Hills High School.

Aliso Niguel (3-1) scored 21 unanswered points to erase a 21-3 Dana Hills lead, before the Dolphins tied the game 24-24 midway through the fourth quarter. The Wolverines won their sixth in the last seven games against Dana Hills (2-1) to avenge last year’s last-minute thriller in Aliso Viejo.

The Dolphins next host Woodbridge for Homecoming on Friday, Sept. 16.

While Dana Hills looked like it was going to win in a romp in the game’s early goings, Aliso Niguel’s special teams unit was clicking from the opening kick.

The Wolverines opened the game with an onside kick that rolled deep into Dolphins territory before being recovered by Aliso Niguel, and the Wolverines knocked in a field goal for the 3-0 lead.

Dana Hills had a bad punt snap on its first punt of the game – foreshadowing the Dolphins later undoing – and throughout the game, Aliso Niguel’s punt unit got balls to bounce and roll deep to pin Dana Hills, while the Wolverines continually had solid kick returns for strong field position.

Dana Hills grabbed the lead late in the first quarter on an incredibly fateful bounce. Senior quarterback Connor Vernon tossed a ball deep up the seam that bounced off Chase Berry and directly into the hands of a sprinting Cael Vincent, who took the ball the rest of the way on a 67-yard touchdown pass.

Another big play vaulted Dana Hills to open the second quarter. Senior running back Christian Guarascio busted a 70-yard run up the Aliso Niguel sideline to set up a 10-yard touchdown pass from Vernon to Berry for a 14-3 lead.

With time ticking down in the second quarter, a 41-yard Gaurascio run brought the Dolphins into the red zone, and Vernon found Bolter in the back corner of the end zone for a 20-yard TD pass and a 21-3 lead with 43 seconds remaining in the quarter.

Guarascio collected his third 200-yard rushing game of the season with 225 yards on 24 carries. Vernon completed 13 of 23 passes for three touchdowns and three interceptions.

Then, Aliso Niguel finally found its spark. Jack Gill sprang a 24-yard run, and Hunter Najm placed a perfect ball over the shoulder on an in-stride Dylan Kissen.

Midway through the third quarter, Aliso Niguel earned a big momentum swing. The Wolverines intercepted Dana Hills at the 1-yard line and marched down the field in six plays for a 2-yard touchdown run to cut the deficit to four points.

Guarascio dragged Dana Hills down the field on the ensuing drive with three straight first-down-gaining runs to set up 28-yard game-tying field goal by Deacon Hill.

It was there the opportunity arose for Aliso Niguel.

A bad punt snap with the wet ball forced the Dana Hills punter to run for space. The punt eventually got off, but it went straight up in the air. Another Dolphins player nearly touched it, but the Aliso Niguel defender charged hard to grab the ball with speed at the 12-yard line.

The Wolverines went in untouched for the score and the lead. There was a bad snap on the extra point, so Aliso Niguel led only by six, 30-24, with three minutes remaining.

On the ensuing drive, Aliso Niguel snatched a Dana Hills pass over the middle and finished off a 60-yard return and a two-point conversion for the 14-point final margin, 38-24.

Aliso Niguel grabbed one more interception to truly ice the game and avenge its rivalry defeat.

The rivalry between the two schools, whose enrollment areas split the city of Laguna Niguel, has usually gone in streaks. Before last season, Aliso Niguel had won five games in a row, and Dana Hills had won eight in a row before that.