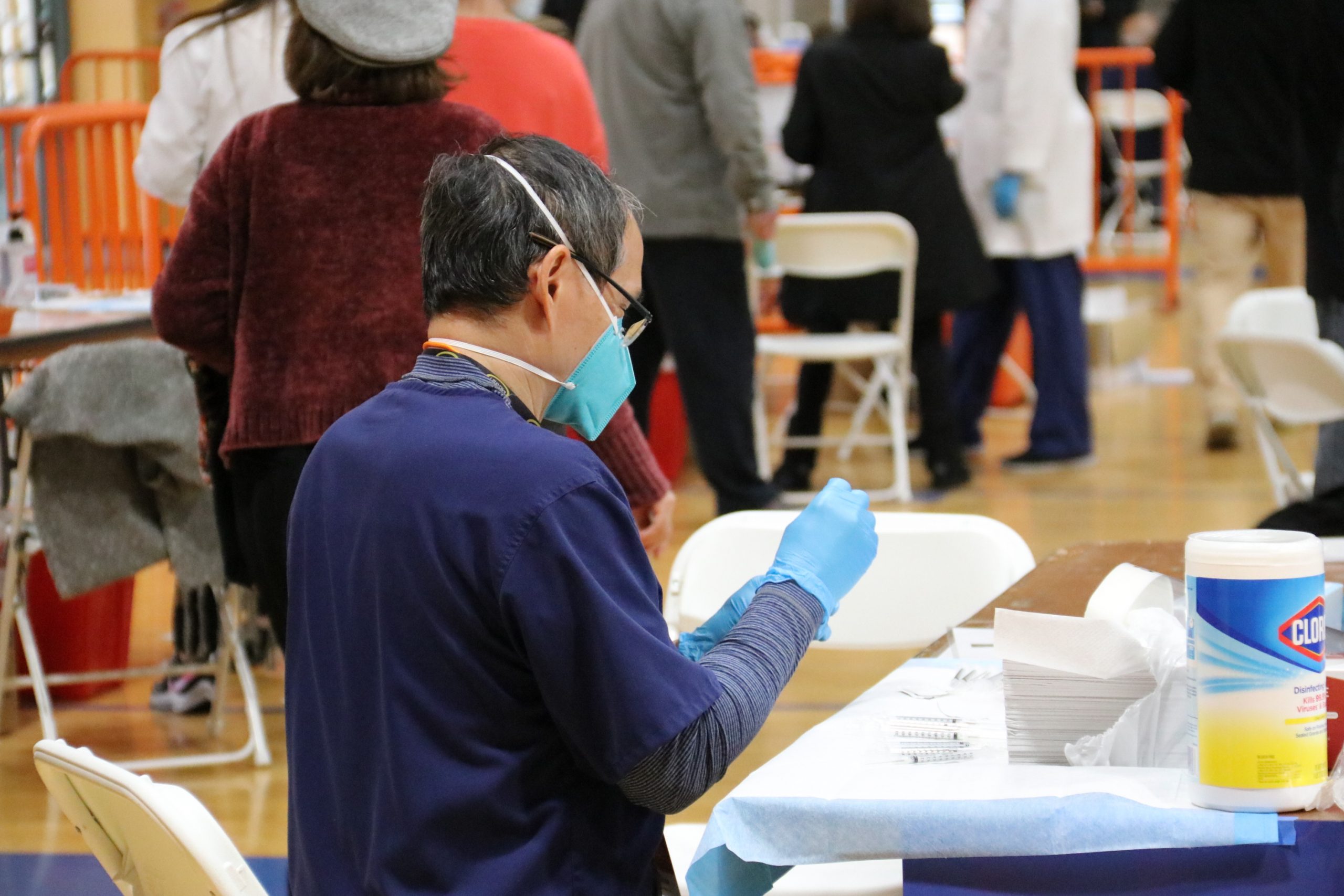 Health officials say Orange County has the infrastructure to distribute vaccines for COVID-19, but stress that the supply of vaccines is not meeting the demand.

Residents eligible for the vaccine are reportedly “clamoring” to claim a vaccine appointment through the county’s website and app, at othena.com. Those who managed to snag a time awaited their turn on Saturday, Jan. 23, for vaccinations in Aliso Viejo despite the rainfall.

“The weather isn’t the best, but it’s an exciting day for the Fabulous Fifth District,” Supervisor Lisa Bartlett said during her opening remarks for the launch of a new vaccination site. “Today is another exciting and significant milestone for Orange County as we open the second regional super POD site right here at Soka University.”

Officials hope to deliver as many as 4,000 doses a day at the site, seven days a week, as long as supplies are available.

“While the need is great, our supply is limited. We are working as hard as we can and utilizing all our resources to secure more vaccines from the state,” Bartlett said on Saturday. “We are working on bringing smaller PODs to make vaccines more accessible.”

The county receives about 20% of the overall supply designated for Orange County, with the remaining 80% going to hospitals and health care providers. Supplies from the state and federal government have been slower to come than anticipated, officials stated during Saturday’s press briefing.

Beth Apodaca, director of the Dorothy Visser Senior Center in San Clemente, where a vaccination clinic is slated to open next month, stressed two important components to keep in mind when it comes to the distribution of the vaccine: it’s driven by appointments, and those appointments can only be made when there are enough shots available.

“Everything is determined by whether (the county) received the vaccines,” Apodaca explained. She added that pop-up sites planned in several cities throughout the county can open “once they get the vaccine. So that’s what everything is contingent on.”

Though the senior center, located on Avenida Victoria next to the fire station, is being set up as a vaccination clinic for seniors 65 and older, appointments are already booked solid. Apodaca also noted that the opening, Feb. 10, is a moving target, and one that could be rescheduled depending on the availability of the inoculations.

Dana Point officials say they are coordinating with the county for a potential pop-up distribution site, as well.

The opening of the local pop-up site, as well as others planned around the county, Apodaca said, are meant to accommodate seniors who aren’t able to make the drive to Aliso Viejo and Disneyland in Anaheim, where the first Super POD site was established.

“That’s the whole philosophy behind this; they can’t get to Aliso and Disneyland,” she said, before touching on another dilemma associated with the rollout of the vaccines. “Some can’t even get the two miles here to the center.”

Scheduling appointments has come with its own set of headaches, as the county has required the use of Othena to register for vaccinations. In the early days of the rollout, the site had experienced complications because of the high-volume of registrants.

Apodaca noted that many seniors don’t have an email to register, let alone smart phones that they can use to access the app—an aspect of the rollout and planning that, she said, was overlooked.

“When they put that plan together, they didn’t take into account they don’t have an email … without an email you can’t register,” she said, referring largely to the much-older bloc of seniors.

For Kathy McWade of Laguna Niguel, she was able to secure an appointment at the Soka University site this past Saturday for her 92-year-old mother after having signed up on Othena the day the program was announced on Jan. 12.

“It was a huge relief,” McWade said. “She’s very healthy for 92. But she’s a tiny woman. We’ve both been super careful, but I don’t know if she would have survived COVID if she were to get it.”

McWade says she’s unsure how her mother would have signed up on her own.

“We’re both retired, so I was able to check the app regularly for openings,” McWade said. “I originally tried signing up for the POD site at Disneyland. But it’s further out and slots were going so quickly. When I saw that there were openings at Soka, I was able to grab the 8 a.m. appointment.”

“Othena has her automatically signed up for her second vaccine,” McWade said. “I’m so happy they set up (the POD site) at Soka. But I’ll be even more relieved once both my mother and I have had our second vaccines.”

At pop-up sites, like the one in San Clemente, residents must schedule an appointment directly with the center, Apodaca explained. But in order to do so, they must already be registered with Othena. For the past few weeks, she said, volunteers with the senior center have been working to register those looking to make an appointment.

“It’s been a very difficult few weeks. The program, I’m sure, is wonderful; it’s just not made for seniors,” Apodaca said, later explaining the advice she typically gives to those signing up: “I tell everyone, don’t register on the website; download the app. It’s user-friendly; the web has issues.”

County officials are encouraging members of the community to do just as McWade did—to periodically check Othena for availability, be patient, and help your elderly relatives get access to a vaccine.

“If you aren’t tech-savvy, reach out to a trusted relative for help, just like you would with a doctor’s appointment,” a staffer with Supervisor Bartlett’s office said.

But booking an appointment for seniors who are homebound, or have no close family members to assist them, or do not speak English, gets complicated.

As of Tuesday, Jan. 26, Othena did not offer any other language services in addition to English—an issue that was brought to light at the Board of Supervisors meeting the same day.

“The lack of alternative languages is a problem. Why was this not taken into consideration when Othena first launched?” Chairman Andrew Do asked health officials.

According to Clayton Chau, director of the Orange County Health Care Agency, the approach was to smooth out the kinks of the program before expanding language options.

“Starting a new system, there’s always glitches, and we improve them,” Chau said. “Just because you register doesn’t guarantee an appointment. The process is too slow. It’s the frustration of not getting an appointment and not getting the vaccine. It comes down to the county not having enough vaccines.”

According to Bartlett’s office, the infrastructure for vaccine distribution is established and ready, but the supply of vaccines is not. Earlier this month, the county announced it would be launching “Operation Independence,” in which officials would collaborate with the Orange County Fire Authority to help administer COVID-19 vaccinations to residents countywide.

“We are being very vocal with the state,” Bartlett said during the board meeting, addressing Chau. “We’ve got people clamoring to get vaccinated. We don’t have the vaccines. We’ve got to coordinate better with the state. Whatever you can do to drive home that point with health officers will make the difference. We’ve got to make this happen.”

As the board meeting commenced, the California Health and Human Services Department held a conference call to provide statewide COVID-19 updates.

“We understand that the vaccine supply is limited, but we also need to address that the supply we have now needs to get administered as quickly as possible,” said Yolanda Richardson, the director for the state’s Government Operations Agency.

Richardson said the CHHS is considering working with third-party administrators to improve efficiency of distribution and is building a network of vaccine administration to include public health systems, pharmacies, public hospitals, community health clinics, and pop-up and mobile sites.

However, Orange County and other California counties continue to struggle with not knowing when vaccines will arrive and in what quantity.

“We continue to hear that being a problem,” Richardson said. “Advance notice is definitely going to help with distribution. We don’t know at this time when that’s going to change, but we’re letting (counties) know that’s something we are all looking forward to.”

When the pop-up site does open, the center is looking at getting about 500 seniors vaccinated, according to Apodaca. The endeavor, she continued, will require doctors and nurses that the county sends down to administer the shots, as well as several local volunteers to help sanitize areas and waiting chairs, and to also monitor each senior for about 15 to 20 minutes after they’ve received the shot.

“If we can help 500 seniors stay alive, we’ll jump through the hoops,” she said, adding: “We have an amazing community in San Clemente that has really stepped up for seniors. Working with the city, because we’re not operated by the city, they stepped up with helping me with parking, getting help with the CERT (Community Engagement Response Team) group … they’ve been a blessing.”