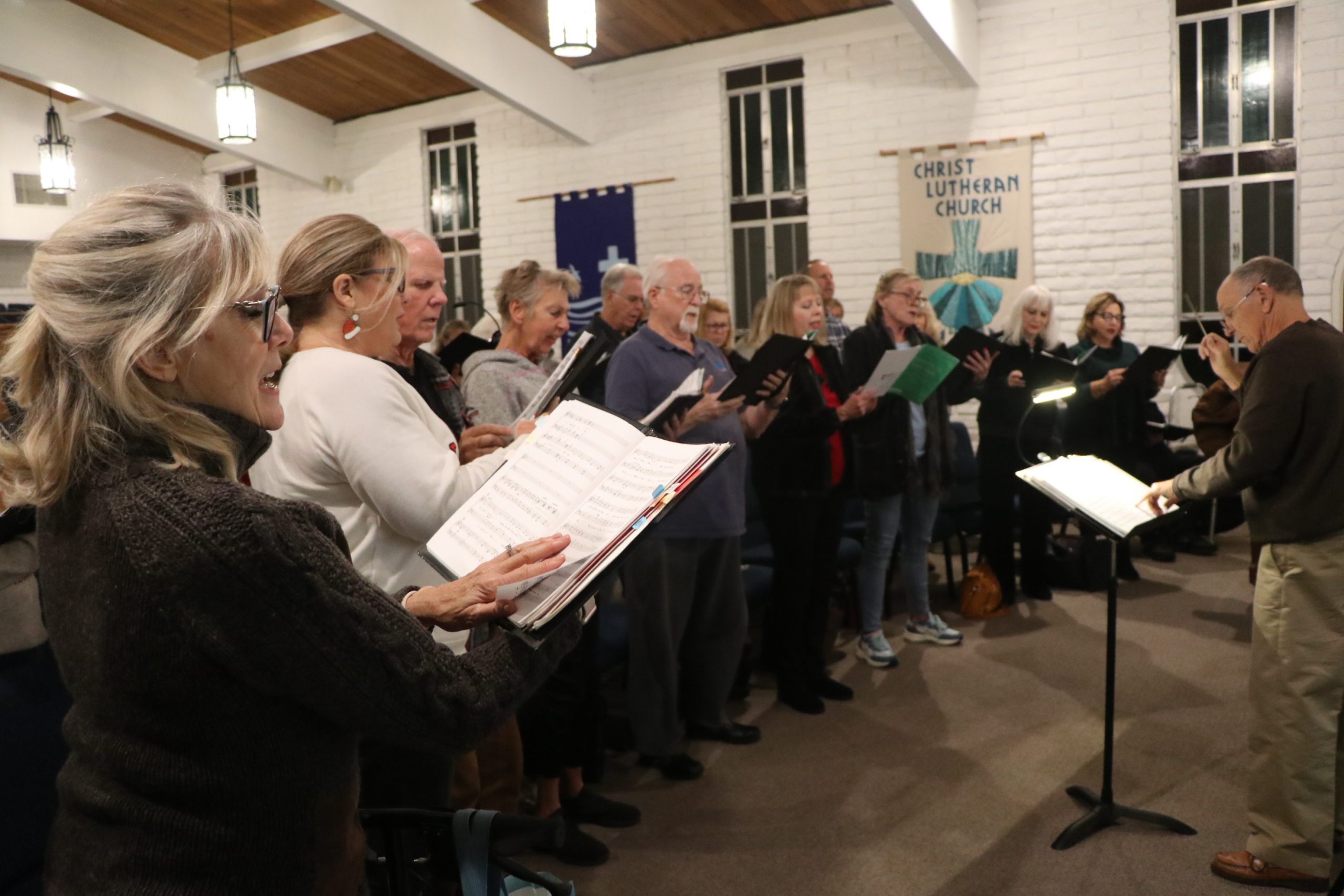 Featured Image: Ahead of their upcoming concerts this weekend, the South Coast Singers rehearse at Christ Lutheran Church in San Clemente on Tuesday night, Dec. 14. The concerts will mark the group’s first time performing since the COVID-19 pandemic started. Photo: Shawn Raymundo

The South Coast Singers are returning to the stage as a group for the first time since the coronavirus pandemic began its spread in early 2020.

They will first perform the musical All is Well on Friday, Dec. 17, at 7 p.m. at the Norman P. Murray Community and Senior Center in Mission Viejo. The group has another show on Saturday, Dec. 18, at Our Savior’s Lutheran Church in San Clemente at 4 p.m.

All is Well is based on artist Michael W. Smith’s 1989 album Christmas, which features a song with the same title as the musical.

The two-hour program aims to put the audience into the Christmas spirit, while South Coast Singers hopes to raise money to give away as scholarships during the “Our Stars of Tomorrow” event that they put on each year.

For the past 17 years, the organization has given thousands of dollars in scholarships to talented high school students in the area. Funds to pay for scholarships are raised by putting on shows every June and December.

“What we need to do is, we need to get grants or people willing to support us,” said member Barbara Brient. “(With that support), maybe it won’t be such a headache each time trying to come up with selling tickets, because there’s nothing worse for a singer to be singing to a half-empty hall.”

The pandemic hit the group hard, as it cut down the number of singers going into 2021 from 52 to 26. Some members simply decided not to come back for this year’s concerts, which added to the stress of trying to organize an orchestra and selling enough tickets.

Instead of singing together in 2020, multiple small groups of three or four people formed to perform at weddings, parties, and other events.

Brient said it has been “huge” to see each other again. Since the group started practicing in September, one of the members has baked cookies for each of their Tuesday rehearsals.

“I kid you not, it’s been amazing,” she added. “Everybody hugged (in September), and it was that feeling of joy to be back again.”

Despite the time that has passed, the singers still sound great, according to Brient, who has been in the group the longest, at 26 years.

“I’m happy for those of us who have stayed in it,” she said.

“We love singing, we love music; it’s our passion. We’ve got nurses, we’ve got teachers … we’ve got engineers, we’ve got all kinds of people in there building up a choir, so it’s just a fun, loving way to get together twice a year.”

The group hopes to take the audience back in time with their performances and have them relive the memories of their childhood, therefore putting a smile on everyone’s face.

Conversely, they enjoy the compliments they receive after the shows are finished, as they greet the audience members walking back to their cars.

“You don’t know what that does to make us feel good, because that’s what we’re there for,” Brient said. “We want to (make) people-pleasing music, to make somebody smile when they leave and uplift their spirits to say, ‘Wow, that was worth the $20.’ ”

South Coast Singers is also inviting any person who desires to join the choir for next year to call.