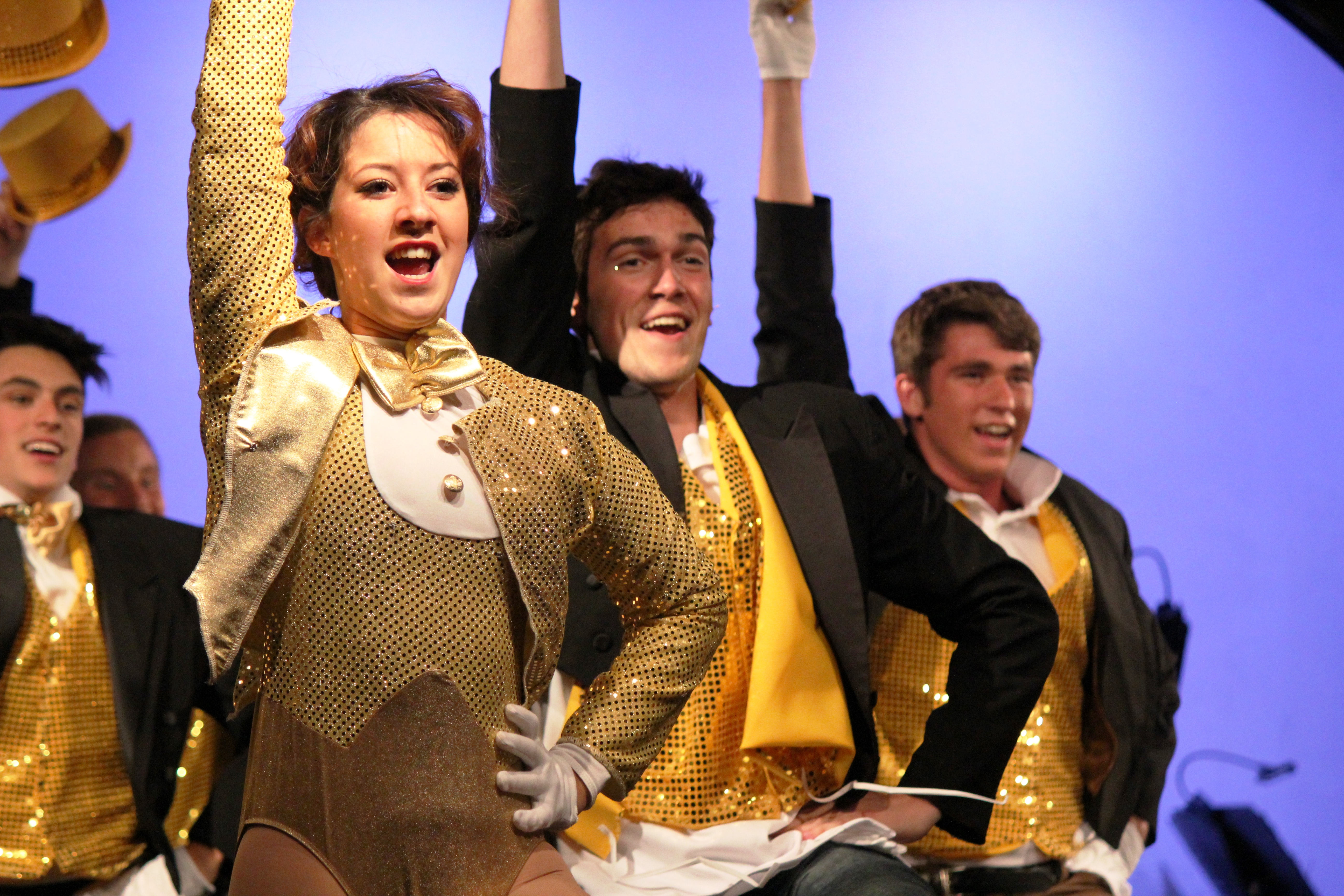 SOCSA’s ‘A Chorus Line’ Performance is One Singular Sensation

“Won’t forget, can’t regret, what I did for love.”—A Chorus Line Cast

As the words “won’t forget, can’t regret, what I did for love” echoed through the theatre, one thing became clear: the chorus resonated with each cast member standing on the Porthole stage.

The iconic song from one of Broadway’s longest running productions, “A Chorus Line,” holds significant meaning for the 28 cast members taking center stage this weekend as the South Orange County of the Arts tackles the well-known, and difficult, Marvin Hamlisch musical that follows dancers through the theatre auditioning process on one of New York’s most renown streets.

More than half of the cast, made up of some of the school’s most talented dancers, singers, actors and stage crew will leave Dana Hills High School in June to pursue their dreams. For some that means Broadway, for others smaller theatres and university degrees. Regardless of the path these young artists take, their final musical at Dana said it all, “But I can’t regret what I did for love.”

The senior will enter UCLA’s musical theatre program this fall with her eyes set on Broadway. Playing the sheltered Vermont transplant, Val, who dreams of becoming a Rockette, Barry’s vocals explode on stage. She belts out the plastic surgery tales of the “unfortunate” looking performer who has her chest and rear enhanced to fit the Broadway mold. Fellow hopefuls stand in the shadows, passing critical stares as Val auditions for the chorus line. It’s Barry’s time to shine.

“This is really the story of every performer,” Barry said. “It’s about everyone’s struggles.”

Throughout the show’s two acts, each cast member has their time in the spotlight.

Senior Spencer Martin’s monologue, as the young dancer Paul, takes the audience on an emotional journey through his childhood, time as a drag performer, his parent’s reaction to his lifestyle and his own dealings with homosexuality and manhood.

Fellow seniors, Xandy Lopez and Keegan Marquis, take on the tumultuous relationship between longtime dancer, Cassie, and Broadway director, Zach. Battling their past, the pair fights through abandonment, career failures and the desire to come home.

“These kids are coming into their own right before they graduate.”–Masie Wilson

“These kids are coming into their own right before they graduate,” said SOCSA musical director Masie Wilson. “That’s the whole point. We are here to prepare them for college, to become professional artists.”

With musical theatre teacher and director Brittany Casey on maternity leave, the cast, crew and supporting staff stepped up to the plate. Theatre arts instructor Samantha Sanford took on the director’s role, while the fine arts students elevated their commitment, often practicing during lunch, at home and well after their classmates had gone home for the day.

“It gave everyone a push to work harder,” Wilson said of Casey’s absence. “Everyone stepped up their game for her, and for themselves.”

As the performance comes to a close, those in the spotlight meld into one. With matching, flashy gold costumes they come together. Each performer that made a connection with the audience is suddenly lost among the crowd—an unending ensemble.

For these performers, this is a culmination of their time at Dana Hills, on the Porthole Theatre’s stage with their friends and cast mates.

“It’s a big reminder of why we do what we do and why it is worth it to take the risk,” Barry said.

The musical runs through Saturday, April 26. All shows start at 7 p.m. with one matinee on Saturday at 2 p.m. Tickets are $12 for students and seniors, or $15 for adults. Visit www.socsarts.org for tickets.