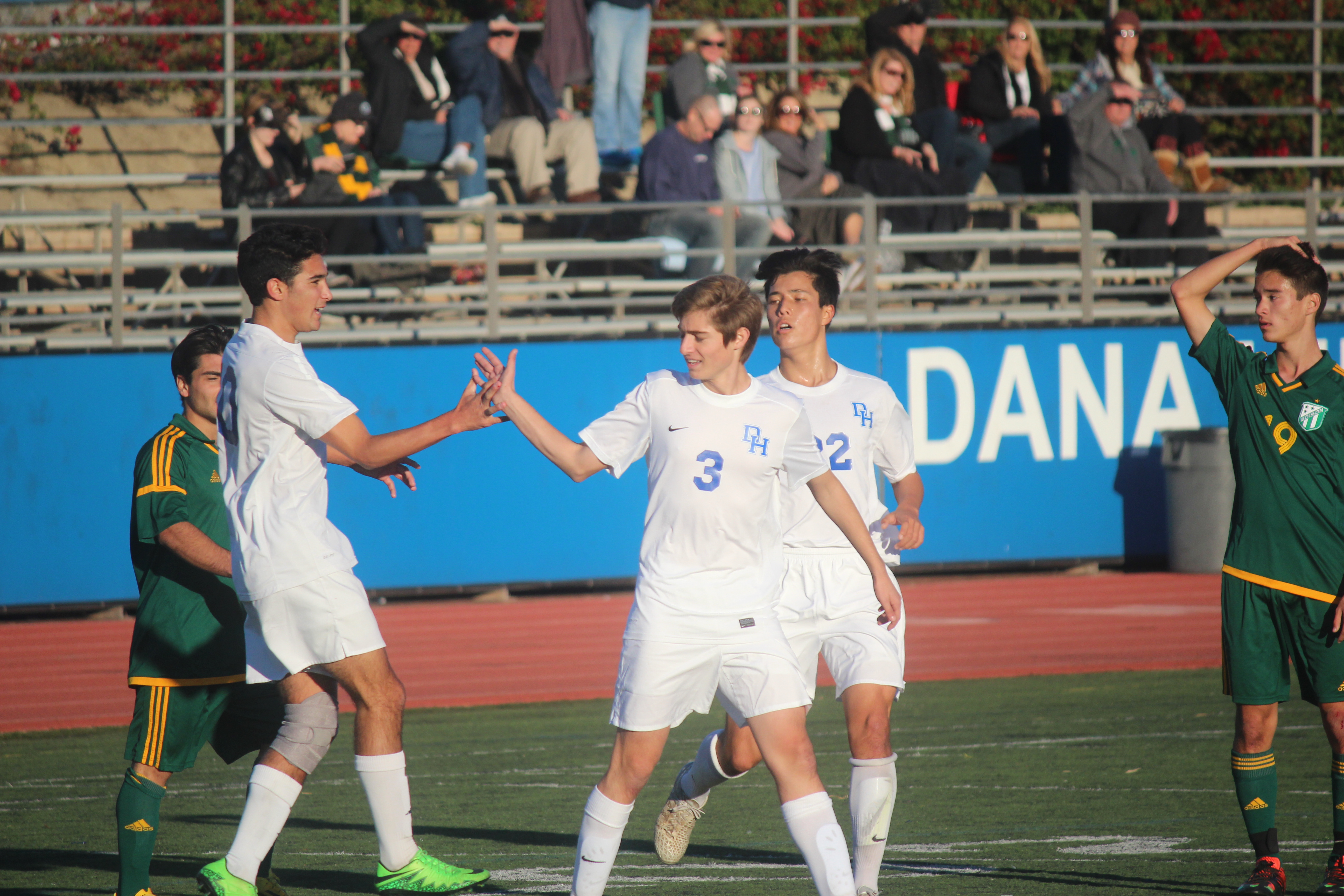 As the clock dwindled into stoppage time during a tight nonleague game against Edison on Dec. 16, Dana Hills senior midfielder Spencer Madden knew his team would come through. The Dolphins had dominated possession for much of the second half, but gave up a goal on a long Edison shot from outside the box that tied things up 1-1 in the 57th minute. In extra time, the Dolphins flipped the proverbial switch, a move that has become a trademark of their young season.

Dana Hills scored on a nifty last-minute goal by Dustin Lopez, which sealed a 2-1 victory over Edison and ran the Dolphins win streak to four games.

The winning play was ignited by midfielder Dante Romero, who pushed the ball downfield and into open space, finding a wide open Evan Bicknell. Bicknell and Lopez played a speedy give-and-go, and the senior striker found the net just before the clock expired.

Dana Hills (4-1-1) has been excelling in the second half of games this season, outscoring Edison, Anaheim, San Clemente and Laguna Beach by a combined 5-2 margin in the final 40 minutes. However, the Dolphins have found the back of the net only once during the first half of those four games.

“It just takes us a little while to get going but we’re getting wins,” Madden said. “We know in the second half we’re going to dominate the other team like always.”

Against Edison, Madden put the Dolphins out in front on a headed goal in the 37th minute.

Dana Hills is off to its best start in two years, and Madden, along with head coach Leo Compean, accredit the hot start to the team’s cohesiveness. The Dolphins field 12 seniors this season and many of them are three- or four-year varsity starters. During Dana Hills’ decisive goal against the Chargers, the ball never left the foot of a senior player.

“I have a lot of confidence in these boys. This is the most fun I’ve had in years coaching,” Compean said. “It’s (their) attitude and comraderie and support for each other; it’s unreal.”

Dana Hills lost to Division 1 powerhouse San Clemente 2-1 in the season opener on Dec. 2. The Dolphins gave up two early goals, including a penalty, but rallied late to outshoot the Tritons and notch a goal in the second half.

Following a tie with Laguna Beach on Dec. 4, the Dolphins offense caught fire in a 6-0 win over Army-Navy on Dec. 8. Back-to-back wins over previously ranked Anaheim and San Juan Hills followed. Compean said after the Dolphins 2-0 victory over Anaheim on Dec. 9, his team could feel the momentum building.

After playing three games in three days last week, the Dolphins will not take the field again until Jan. 8, when they open Sea View League play against Aliso Niguel.