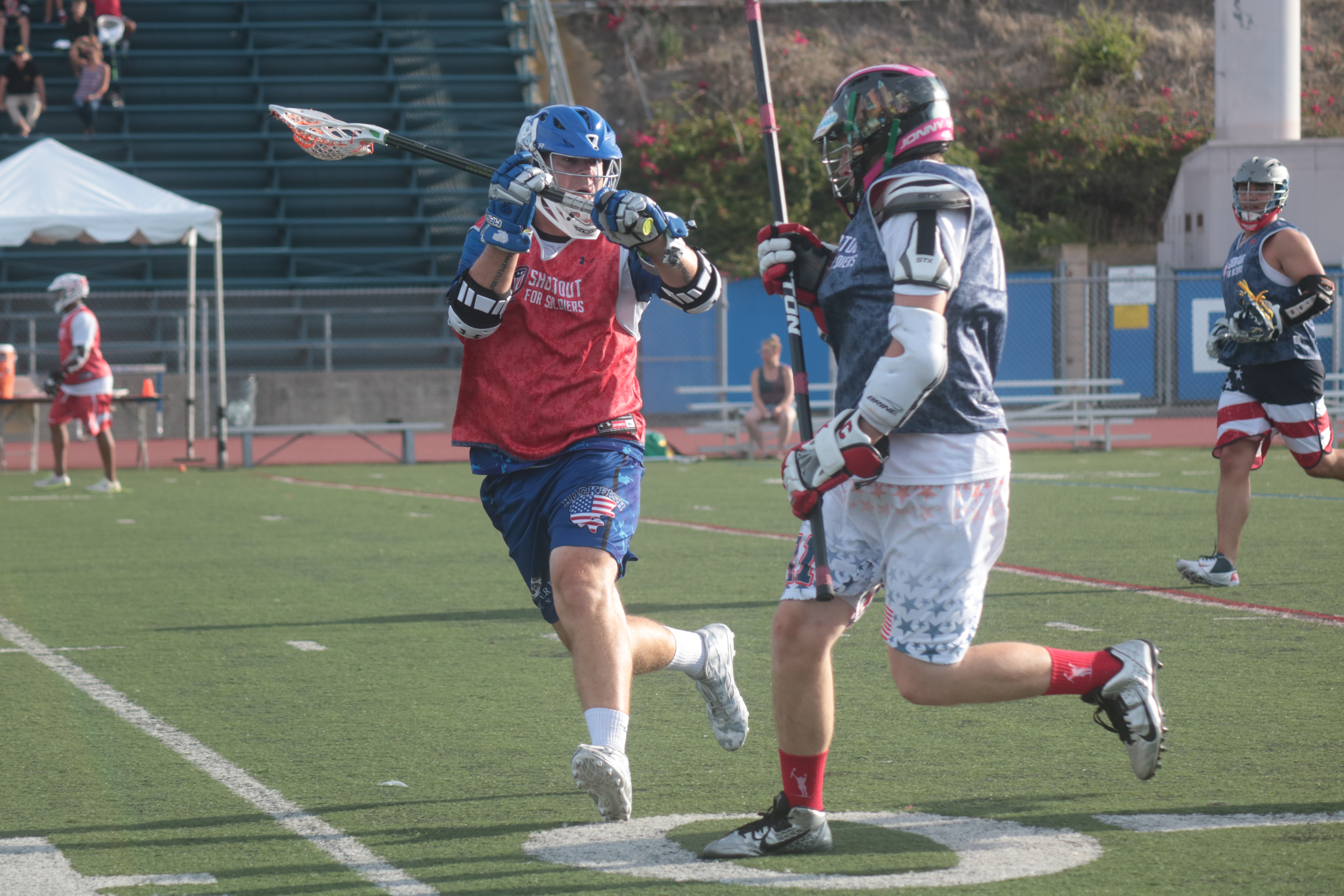 The charity setting for California’s Shootout for Soldiers 24-hour lacrosse event hosted by Dana Hills High School did not deter hard, physical and competitive play. A veterans and active-duty military game, with the Navy in blue and Marines in red, set the tone early when they took the field at 6 p.m. on July 31.

Each of the 48 consecutive games following, which lasted until Aug. 1 at 6 p.m., were played at full speed. Each team donned either a red or blue jersey and in the end, the Stripes defeated the Stars 162-119.

“Teams were going close to 100 percent, if not 100 percent and playing for real,” California event coordinator Chris Iltis said. “We needed these refs, because right out of the gate, in the veterans’ game, the goalie came out and laid someone out. Everybody was playing pretty hard. A lot of the games I’ve seen from back east were casual, but here they’re playing to play, they’re putting on a show.”

Hundreds of players and spectators flocked to Dolphin Stadium for the 24-hour event, which benefits multiple veteran outreach programs, and raised $23,975. Shootout for Soldiers, which hosted four other events nationwide this summer, raised a total of $408,931. The money will go to The Wounded Warrior Project, Army Ranger Lead the Way Fund, Gary Sinise Foundation and Semper Fi Fund, all of which assist wounded veterans and their families.

Veterans and active-duty members in attendance all spoke highly of the event, excited about the prospect of what next year’s games may hold.

“The event is really good,” Sgt. Dean Grau, a Marines veteran, said. “It’s raising awareness for organizations like the Wounded Warrior’s Project, which is a huge helper for all injured service members overseas. I remember when I was over in Afghanistan in 2013; they helped a lot of the guys that got hurt.”

Grau, originally from New York, was stationed and deployed from Camp Pendleton.

The event hosted 31 teams from California, including a handful from Arizona and Nevada, and filled each time-slot for an entire day, with multiple groups playing two and even three games.

Local high schools like Dana Hills, San Clemente and Santa Margarita Catholic sent teams representing their schools. Collegiate squads, which included players from USC and the University of Arizona, along with local club teams such as OC Wave and Surf City, were well represented.

“There’s been really great support from the community. Over the past three or four years I feel like there’s been a lot of veterans around here putting their time and lives into supporting our country. It’s stuff like this that’s really special for them,” Jack Gilchrist, a junior midfielder for the USC lacrosse team, said. “It’s a chance to show that we really support them and give thanks. I think it’s definitely something that should be happening more often.”

Iltis was encouraged to see the event be so successful in its first year and appreciated the positive feedback the event received.

“I am so impressed with how much fun everybody has had,” Iltis said. “Even though the games have been a little scrappy, everybody does the picture after, hugs and shakes hands. It’s been amazing to see a lot of veterans shaking our hands and saying, ‘Thank you for doing this.’ People really do appreciate it and it’s been really cool.”