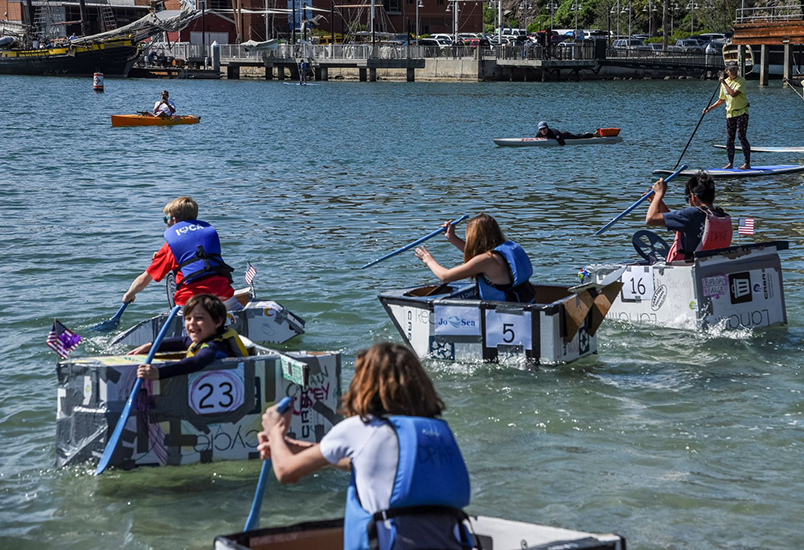 Featured Image: Young sailors hit the waters at Baby Beach in makeshift boats as they compete in the Dinghy Dash races during the Festival of Whales. The Dinghy Dash will return to Dana Point for this year’s Festival following a two-year hiatus because of the pandemic. Photo: Courtesy of Westwind Sailing Executive Director Diane Wenzel

Boaters of all ages will hit the water in boats made out of cardboard and duct tape for the 5th annual Dinghy Dash.

The Dinghy Dash cardboard boat races will return to the Dana Point Festival of Whales on March 5 from 8 a.m. to 1 p.m. at Baby Beach after a two-year hiatus due to the pandemic.

The race costs $40 per team to enter the Dinghy dash and $70 per team for the Business Barge. All of the proceeds for the event go towards the Dana Point Aquatic Foundation. Boatbuilding will begin at 8 a.m. on March 5. Boats will be judged for special awards from 10 to 11 a.m. and races will take place from 11:15 a.m. to 12:15 p.m.

Chick-fil-A will be one of the event’s sponsors, selling food for spectators and participants to enjoy throughout the event.

Up to five people may work as a team to build a boat but only one person per team may race, with the exception of the Business Barge Division, which requires two to four racers per team. All building materials for the Dinghy Dash will be supplied by Westwind Sailing. Teams will be given cardboard, duct tape, a box cutter knife, as well as Sharpie pens to decorate.

No outside materials will be allowed. Racers will also be given paddles; however, no other means of propulsion are allowed. All racers must also wear fitted life jackets that will be provided by Westwind.

“There’s simple rules,” Westwind Sailing Executive Director Diane Wenzel said. “You can’t cover the whole bottom of your boat with duct tape and you have to be able to be visible, you can’t be enclosed inside something. It has to be able to be paddled by one person. And that’s pretty much it, and then when we have free rein, people go to town building their boats.”

While teams build their boats, the President of the San Juan Capistrano Fiesta Association and “Man on the Sand” Jim Taylor will be talking to each team about their designs.

“It’s a lot of fun,” Taylor said. “I go out on the sand with a cordless (microphone), interview them while they’re building their boat. Some people are so secretive about their design … and it’s all made out of cardboard and duct tape.”

During the Dinghy Dash, racers will paddle around a buoy and bring their boat back to land to cross the finish line.

“It’s just hilarious to watch,” Wenzel said. “Some of the boats are amazing, they’re fantastic, they go super-fast and make it to the finish line like no one’s business. Some of them go in circles, some of them just kind of implode upon themselves. Some of them tip over. It is a kick in the pants to watch and it’s all in fun. And everybody knows they’re made out of cardboard. Who knows what’s going to happen?”

Awards will be presented to the top racers, as well as five special awards chosen by guest judges. Dana Point Mayor Joe Muller, surfing icon Joyce Hoffman, Chief Operating Officer of Dana Wharf Donna Kalez, Hamboards co-owner Abe Paskowitz, and Marty Stoland will be judging the special awards such as Most Creative, Best Use of Duct Tape and The Titanic—the biggest wipeout.

Matt Rinehart, the 51st annual Festival of Whales logo artist, will present the awards at the end of the event. The hand-made award plaques will be designed by the Boys & Girls Club of Laguna Beach.

“The Dinghy Dash is insanely fun. I mean, you’ve got mostly kids on the beach at the crack of dawn with box cutters, cardboard duct tape, and crafting some of the most amazing boats that you’ve never seen,” Taylor said.

iHeartYoga Founder Elsa Stephen is hoping to maintain her title after winning the Business Barge Division race in 2019. She’s kept her cardboard boat in her garage since the last race, eagerly awaiting her chance to defend the studio’s title.

“For two years, this huge cardboard box has been sitting in my garage, so I am very excited to get it out of my garage,” Stephen said.

Her favorite part of the event is watching the kids racing in the Dinghy Dash.

“Honestly, it’s just hysterical,” Stephen said. “It’s so much fun to watch the boats out in the water. It is a fun part of the creativity of it and like the camaraderie of everyone getting together to do something fun but really, it’s just pure entertainment to watch.”

In addition to the Business Barge Division, there’s the 8- to 12-year-old, 13- to 17-year-old, adult, and adaptive invitational divisions. This year, Westwind Sailing has added the Adaptive Invitational Division after a number of requests from its boaters with special needs.