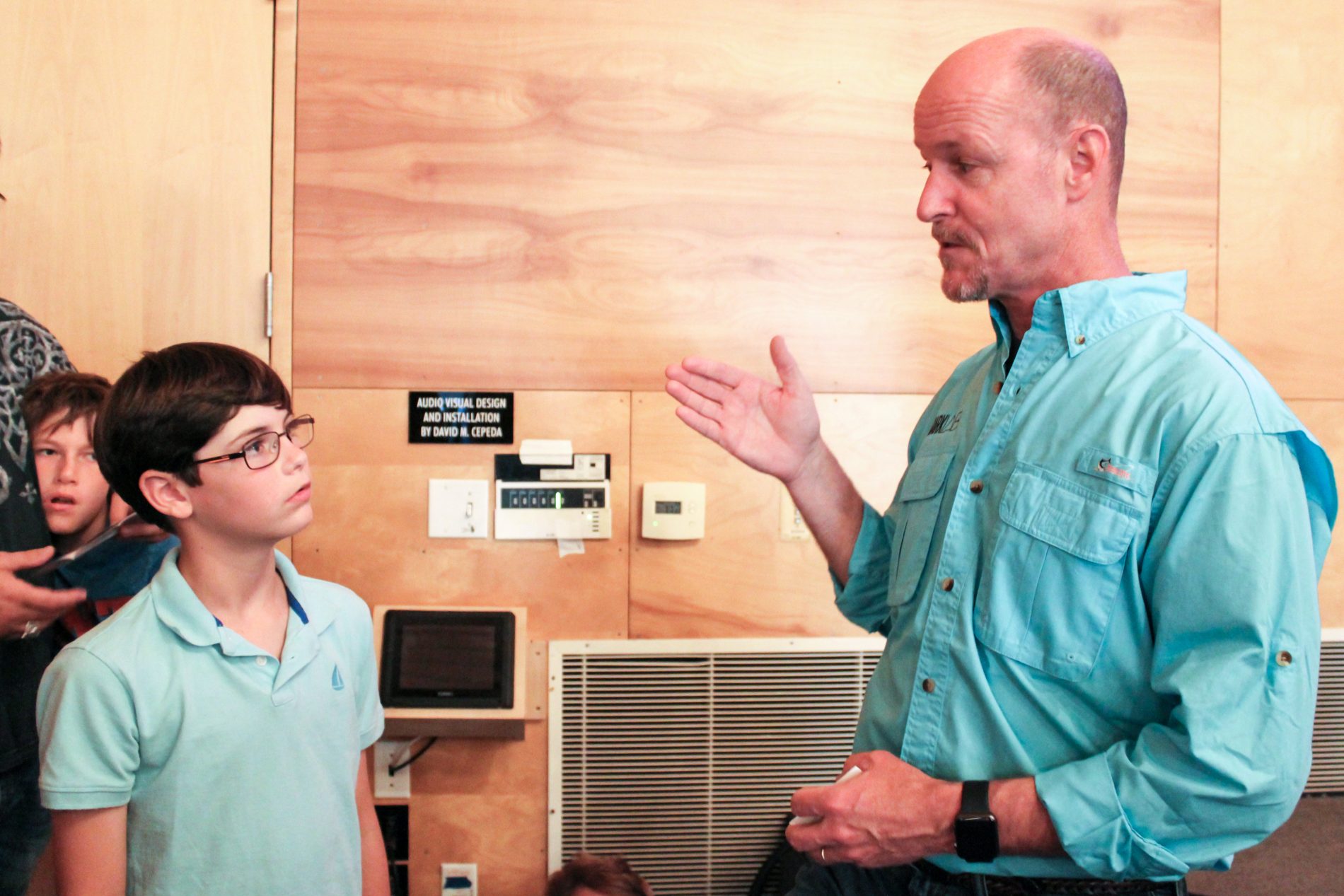 It’s not a rare sight to see a helicopter circling above our beaches and boats so professionals can tag sharks. In the past few weeks, local beaches have had several shark advisories placed and some have even closed.

With the recent sightings, a local expert headed to the Ocean Institute to answer the public’s questions.

On Thursday, June 15, Chris Lowe, Ph.D., professor of Marine Biology at California State Long Beach as well as the director of the university’s Shark Lab, spoke about the animals and ways they’re using technology to learn more about them.

Lowe and his students work with acoustic and satellite telemetry techniques at the Shark Lab to study the movement, behavior and physiology of sharks, rays and gamefish. Lowe discussed their use of satellite transmitters and how it changed their understanding overnight.

“They send a signal into space when the shark breaks the surface,” Lowe said.

This way, along with other trackers, they’ve been able to record shark’s migrating routes and patterns.

He discussed underwater tracking robots they’re developing that allow scientists to get into the shark’s head.

“They have video cameras on them; we can see why the sharks went left or right,” Lowe said.

Another tool they use is a Smart Tag, which he referred to as a “Fit Bit for sharks.”

“It measures every move the shark makes,” Lowe said. “It stays on the dorsal fin for about 24 hours then pops off and floats to the surface.”

One tool Lowe discussed that will help local lifeguards is a facial recognition software.

“Not only will it characterize the size of the shark, but the species,” Lowe said.

Lowe discussed when they tagged sharks in Belmont Shore those sharks were seen in Dana Point’s water, and they stayed.

He said the sharks that have been spotted locally are the smaller ones, meaning they’re younger.

When it comes to swimming or surfing in the ocean, Lowe said people need to be smart.

“We have to have good science, it provides good education,” Lowe said. “We’ve made great strides.”

He said people should continue to use the ocean but to utilize populated beaches, especially ones with lifeguards, as well as to “pay attention to nature.”

He said it’s important that sharks are here because they keep the marine animal population “in check.”

He ended the lecture by saying most people use the ocean as their playground, but it’s the sharks’ home.

“We have to learn how to interact with them in a safe way,” Lowe said.

More than 200 people filled the room at the Ocean Institute, all eager to hear what Lowe had to say about the recent sightings.

Officials at the Institute said 10 percent of the evening’s ticket sales benefited the Shark Lab. For more information, visit www.web.csulb.edu/labs/sharklab/about/.

Some key notes from the lecture

Some key notes Lowe made about the sharks include: